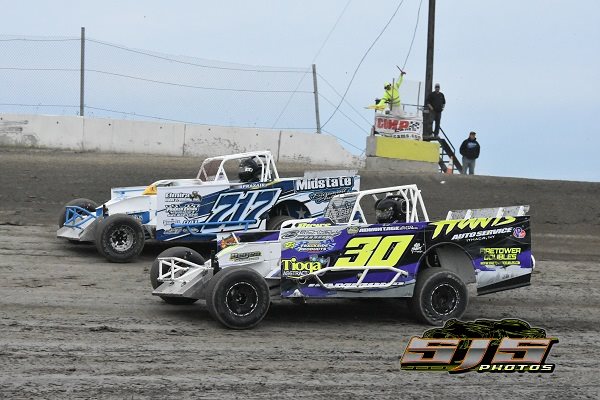 SYRACUSE, NY – Versatile Jimmy Zacharias of Candor, NY will bring three generations of experience to the Exposition Center on the New York State Fairgrounds in Syracuse, NY  when he takes to the concrete arena floor track for two consecutive nights of racing behind the wheel of a recently acquired TQ Midget.

The two days of Indoor Auto Racing Series action presented by RPM Raceway is set for Friday and Saturday, March 8 and 9.

“I bought the Asphalt Modified, transporter, and TQ Midget that Robbie Summers had for sale in New England,” Zacharias said. “Then I sold the TQ to Lew Parks, who asked me to drive for him in Syracuse.”

Parks is a long time car owner whose racing pedigree includes past involvement in Indianapolis 500 teams as well as Indoor TQ entries.

The car Zacharias will drive inside the Expo Center was originally built by Dan Drinan, noted USAC Open Wheel driver, who will be in Syracuse to assist the new team.

“I have some TQ experience,” Zacharias noted. “I made the race in Allentown, PA last year and was in Atlantic City but the engine blew.”

Zacharias is weighing his outdoor options once the Indoor Auto Racing Series Syracuse races are in the books.

“I have the pavement Modified I just bought and a 358 Modified for dirt. My goal is to race a Big Block Modified on the Super DIRT Series tour, and run as many of the RoC Tour pavement Modified races as I can,” an ambitious Zacharias shared.

One thing Zacharias is unsure of is which number his TQ will use.

Each of the two nights of racing will consist of complete programs of qualifying, heat races and feature events for the TQ Midgets, Slingshots and Champ Karts. This is the first time the Indoor Auto Racing Series has ever presented full programs on consecutive nights.

On Friday, March 8, TQ Midgets will run in single car time trials followed by heat races, B Mains and be climaxed by a 24-car, 40-lap feature.

The next night, Saturday, March 9, TQs will requalify, this time in group qualifying, a first for the Indoor Auto Racing Series Fueled By VP Race Fuels.

Heats, B Mains and a 24-car, 40-lap A Main follow with the Indoor Auto Racing Series Fueled By VP Racing Fuels champion to be crowned following the finish of the feature.

Slingshots and Champ Karts will draw for starting spots in their heats races both days. Non qualifiers will follow heats with a 20-car, 20-lap A Main for both classes each night.

Kreutter works at the RPM indoor karting facility in Buffalo, N.Y., but they also have one just 10 minutes from the New York State Fairgrounds in the Syracuse Destiny USA Mall.

The first Indoor Auto Racing Series event in Central New York will be the fourth and fifth legs of the series. Both races will offer equal points in helping decide a tight point race between former champions Erick Rudolph and Justin Bonsignore.

The Exposition Center opened during the Labor Day Fair. The huge, state of the art $33 million project was built without obstructing poles.

Grandstand seating will be available on both the front and backstretch. From their seats, fans will able to be able to see the entire speedway plus the pit area which will be located on the far side of the building. The building has a different seating configuration than other venues the series stops at in that grandstand patrons enter at track level, then walk up to seating areas.