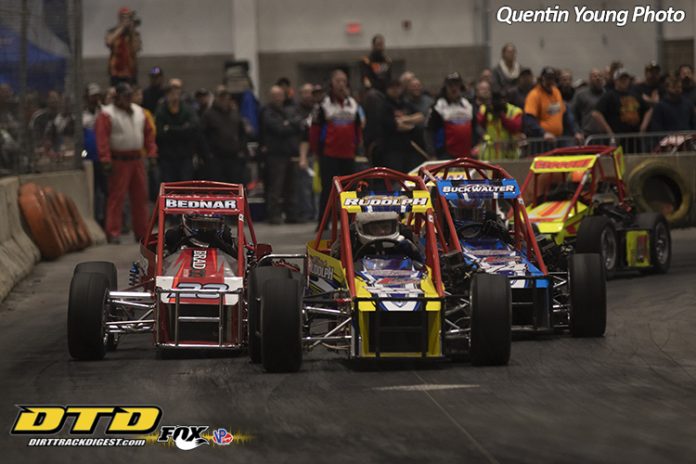 Despite the series finale just a month in the past, 2020 dates for all three of the ‘concrete races’ – the PPL Center in Allentown, PA., Boardwalk Hall in Atlantic City, NJ and the Exposition Center in Syracuse, NY have already been inked by promoter Len Sammons.

The three race weekends will comprise the five rounds of the 2020 Indoor Auto Racing Series Fueled By VP Race Fuels schedule with champions crowned in the TQ Midget, Champ Kart and Slingshot classes.

Also returning for a third season will be the non-point East Coast Indoor Dirt Nationals inside Trenton, N.J.’s Cure Insurance Arena. This event which features the wingless 600 Micro Sprints, however, will be moved from December to the weekend after the Daytona 500, February 21 and 22.


The race-within-the-race, the Indoor Auto Racing Series Fueled by VP Racing Fuels 2019 season championships were decided on the final night at Syracuse. Eight TQ Midget drivers, six Champ Kart competitors and 12 Slingshot hopefuls came into the finale with a mathematical chance to win the coveted titles.

Rudolph finished second and first in Syracuse to clinch the title. Andy Jankowiak, the Atlantic City Gambler’s Classic winner, ended up second in the standings.

Defending Series champion Justin Bonsignore, who passed Rudolph for the win on Friday, dropped from second to third in the standings on the final lap after being involved in a mid-race crash that knocked him from the race. Bonsignore won Friday’s event driving for new car owner Bob Webber Jr. The owner of N.H.’s Star Speedway donated Bonsignore’s weekend earnings as part of a $5,000 donation to Special Olympics.

Over the entire series schedule, just ten TQ drivers were able to qualify for all five of the 2019 A-Main features. Among them, Erick Rudolph was the only driver to register top five finishes in each race.

Eddie Strada Jr., Andy Jankowiak, Matt Janisch and Tim Buckwalter each were able to register four top ten finishes in the five races they qualified for. Also qualifying for all five A Mains were Anthony Sesely, Jonathan Reid and Anthony Payne.

Despite tire softening made illegal for the first time in series history, constant random sampling of top finishers and those in the back that were sent to a laboratory found no one stepping outside the lines.

Though winless in the Kutztown Action Track sponsored Slingshot Indoor Series, Kurt Bettler out pointed Danny Buccafusca, Austin Silfee, and Tyler Truex, who had come into the final event leading the points, and Jared Silfee to grab his first title.

Information for the 2020 events will be available when completed online at www.indoorautoracing.com.