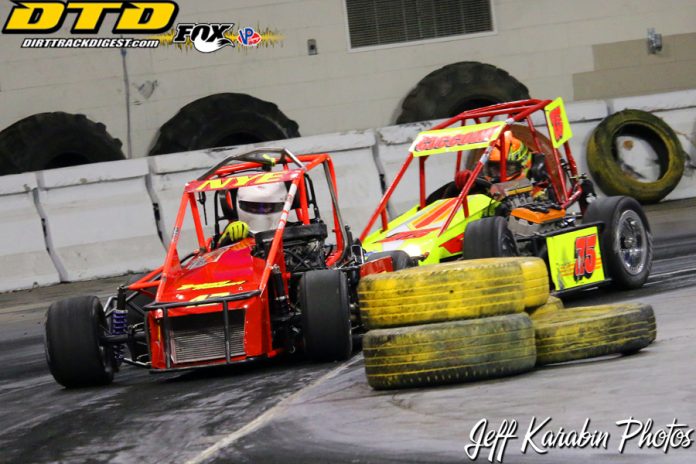 TRENTON, NJ – Indoor Auto Racing Series Fueled By VP Race Fuels promoter Len Sammons has issued a Racers Challenge to the drivers and car owners who will compete in the four 2020 events: “Help us sell out the house and we’ll pay the feature winners in all classes double the purse!” Sammons, who along with sons Danny and Davey organize the events, expanded the challenge to increasing all other feature finishing positions 20% if the “Sold Out” sign is posted at the box office prior to the start of the feature events.

“It can be done,” said Len Sammons. “We’ve done it once in our history and have come close several other times.

There is nothing better than the atmosphere inside a packed arena! The fans and racers feed off each other creating a buzz unlike anything else in racing. “We are 100% focused on growing the Indoor Series and making each event a spectator driven, can’t miss event,” said Sammons. “My staff has always encouraged the racers to interact with the fans and put on a show both in the car and outside of it. Racing comes first, but fan interaction and increasing fan involvement is also a high priority.

This incentive is the next step in that process. “The Concrete Series opens at the PPL Center in Allentown, Pa. on January 3rd and 4th. These events, sponsored by Ironton Telephone, include features for the TQ Midgets each night. Instead of $2,000 to win each, these events would pay $4,000 if every ticket is sold, something accomplished when the first event was held in the building four years ago.

Racing then moves to Atlantic City’s Boardwalk Hall on Friday and Saturday January 31st and February 1st for the NAPA Know How Classic. Andy Jankowiak of Buffalo, N.Y. won $5,000 when he took the 2019 Gambler’s Classic. If he did it again and the place was sold out, he would earn $10,000. In the event’s 17 year history, tickets were nearly sold out on three occasions.

Next up is the third annual East Coast Indoor Dirt Nationals which will return to CURE Insurance Arena in Trenton, N.J. with a new date. This event, held the last two years in December, has been moved to Friday and Saturday nights February 21st and 22nd to avoid a conflict with Christmas. Rated a ‘must see’ event by those who attended the first two years, it’s great racing and new date could make it a sell out with the extra push of the race teams. If so, the 600 Sprint winner would receive $10,000 rather than $5,000 received by Whitey Kidd, III and Erick Rudolph the last two years.

The “Concrete Series” season finale follows on Friday and Saturday March 13th and 14th in a second year return to the brand new Expo Center located on the grounds of the New York State Fairgrounds in Syracuse. N.Y. With features for the TQ Midgets each night, these features which traditionally pay $2,000 would jump to $4,000 with a sellout. At the first ever event held in Syracuse last year, Saturday’s attendance was 75% of the occupancy limit so again it’s very possible. The sell-out bonus plan will also be paid to the Slingshot and Champ Kart divisions that run as part of the Concrete Series.

The Indoor Auto Racing Series staff can provide its racers promotional materials to help promote the events in an attempt to sell tickets. This will include social media aids for Facebook and Twitter campaigns, event posters and handbills along with invitations to set up driver media interviews. “The idea is to work together so that we can build up the series interest to an all-time high. Every driver, car owner and crewman has friends who go to the races and other friends who used to go,” said Sammons.

“We need to encourage the fans to join the racers and take part in the campaign as well and the event promoters will continue its all-out promotional campaign as it has done in the past using television, radio, print, billboards and social media to help sell out the house at each venue.” Tickets, which make great Christmas gifts, can be obtained now through the information available on the series website: www.indoorautoracing. Racers who wish to participate in the “Sell Out The House” program are urged to send an e-mail to indoorracing@aarn.com along with name, address and phone number. Additional ticket promotion ideas are welcome.