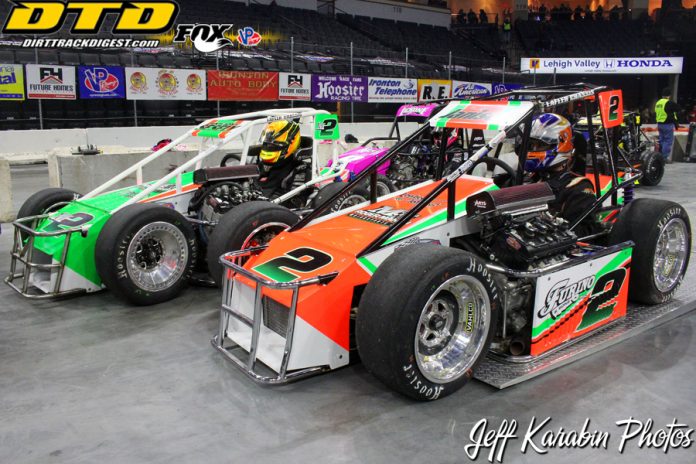 ALLENTOWN, PA – Matt Janisch comes into the PPL Center in Allentown, Pa. for the Indoor Auto Racing Series, January 3-4, fueled by VP Racing Fuels 2020 season opener with an avowed goal: to get as many championship points as he possibly can.

“I’m going to do whatever I can do to be in contention to win the Series title. I’ve had some shots, was second one year by one point to Anthony Sesely. With five features in the Series, you can’t win if you have one bad finish,” Janisch reasons.

He certainly had one great finish last year at the PPL Center in the Ironton Telephone sponsored event.

“That win was very relieving. I knew I was capable, and I had been close a few times and had been doing this long enough to get a win,” said Janisch. “I can’t say I did anything differently that night. And it wasn’t my first TQ win indoors, I had won one a few years ago at Fort Wayne (Indiana),” he shared.

The hometown aspect was special.

“There were a lot of my friends and family there. Winning close to home is always a great feeling,” Janisch admitted.

“There’s no reason why I can’t win the championship. There’s an element of luck in it like there is in all of racing. But I think it’s less than people think.”

Janisch will be driving the same Lafler chassis TQ owned by Roger Mahan that he drove to victory one year ago.

“The Lafler is a well-built car. It’s fast, the short wheelbase makes a rugged car, which is important indoors,” Janisch stated.

“The work on the car is pretty much maintenance,” Janisch said. “It’s a pretty basic car that ran well last year. I was happy to be the driver that got Roger his first Indoors win.”

Janisch will also be fielding, as a car owner, a TQ he built and maintains for hometown Allentown, PA teenager Briggs Danner.

“Briggs has natural talent. He had some good races the last couple of years and didn’t get some of the finishes he deserved. He was running second here on the second night with five to go when he got taken out.  He doesn’t have the indoor experience most of us have but you can’t tell that by watching him race,” Janisch lauded of Danner, a dirt Modified and SpeedSTR racer.

The Allentown event, January 3-4, which has support from local companies including Ironton Telephone, BELFOR Property Restoration, Future Homes and Ironton Auto Body, will include complete racing programs including qualifying and feature events on back-to-back nights headlined by the TQ Midgets. They will be joined by the Champ Karts on Friday night’s card and the Slingshots on Saturday.

Erick Rudolph of Ransomville, N.Y., one of the winningest dirt Modified drivers during the 2019 outdoor season, is the defending Indoor Series champion. Rudolph clinched the title by winning the 2019 series finale in Syracuse.

The “Concrete Series” season finale us on Friday and Saturday March 13th and 14th in a second year return to the brand new Exposition Center located on the grounds of the New York State Fairgrounds in Syracuse. N.Y.

A special non-point event will be held on a banked clay oval. The third annual East Coast Indoor Dirt Nationals will return to CURE Insurance Arena in Trenton, N.J. with a new date. This race meet, held the last two years in December, has been moved to Friday and Saturday, February 21st and 22nd featuring nearly 100 Wingless 600cc Sprints kicking up the clay.

Tickets for all four venues make great Christmas gifts. They can be obtained now through information available on the series website: www.indoorautoracing.com or at the box offices the day of the event.

Corporate sponsorship packages to fit every budget and group sales information is available by email or call Danny Sammons at the series office at danny@aarn.com or 609-888-3618.