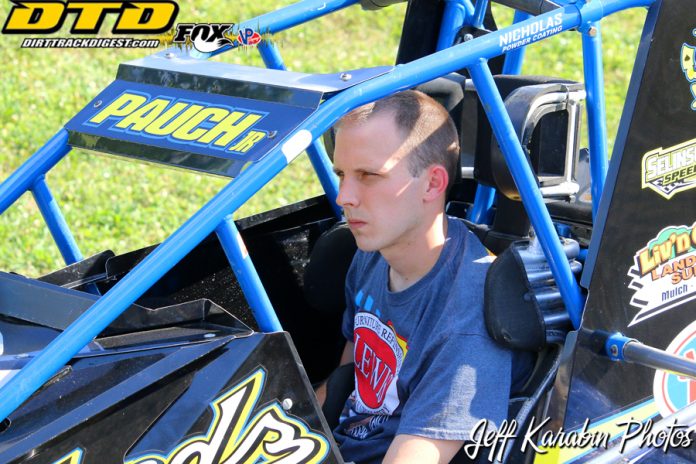 TRENTON, NJ – By any measure, Billy Pauch, Jr. had a very successful 2019 racing season, earning the New Egypt Speedway Modified track championship and running well at both Big Diamond and Kutztown on a weekly basis. But Pauch admits that one race he feels he should have won, the 2018 East Coast Dirt Nationals, bothers him over a year later.

“We ran a close second to Erick (Rudolph). He was hugging the bottom and I was trying to make something happen on the top. I got to him but by the time I did, the top of the track had changed.

“I didn’t want to dump him which was the only way I was going to pass him,” Pauch said. “It was a tough loss. You hate to let a race you feel you should have won get away.”

Also disappointing for the third-generation driver was the 2017 Nationals, a race where Pauch was again a contender but was spun from behind in the feature, breaking his car’s steering in the process, ending his race.

Pauch heads into Cure Insurance Arena on February 21-22, behind the wheel of the same car he has driven in the past two races, the No. 91S owned by Pennsylvanian Lamar Schaffer.  Schaffer also builds engines for his car and customers.

“I can kind of tell when I’m racing against one of Lamar’s customers,” Pauch laughed. “He’s one of the more popular builders and his stuff is reliable and fast.”

Pauch said that the track surface was different the second year from the first. “The first year it was a little rough and wide, last year it got slick. It needed more of a top. It is great clay.”

Though many drivers run Micros in their youth, then progress to full size Modifieds or Sprints, Pauch, 32, traveled a different route.

Pauch has been Schaffer’s ‘house car’ driver for eight years, starting at Kutztown when the owner, who was familiar with Pauch’s SpeedSTR exploits, offered him a ride in his Micro. Since that time, Pauch has run a double show every night at Kutztown between SpeedSTRs and Micros.

“I would have liked to have stayed for the Volusia Super DIRT Series races, but this is a hectic time of the year for me,” Pauch admitted. He is an accountant by trade and tax season is right around the corner!

Whitey Kidd, III won the 2017 inaugural running of the East Coast Dirt Nationals while Erick Rudolph drove Tommy Fraschetta’s car to a win in the second running in December of 2018. This year, the event was moved away from the Christmas holidays to the weekend after the Daytona 500.

Pauch, Jr.’s entry is among a huge field expected for the third annual East Coast Dirt Nationals. The number of entries accepted will be 100, as dictated by building space constraints for the two-day event.

Teams will arrive in Trenton on Thursday for closed door practice on the track which again be built with rich tacky black dustless clay. On Friday, by the luck of a blind draw, the field will be split into 10 heat races. Those who start in the back will benefit by points given for each car passed.

The top 60 in heat race points are then divided into four A-Main qualifiers of which the top three transfer directly to Saturday’s 50 lap A-Main event paying $5,000 to the winner.

On Saturday all non-qualified drivers are split into qualifying races by their results on Friday. Each of these events, starting with twin letter F-Mains transfer four to the next main until two B-Mains are reached on the scheduled. In the final qualifiers, the top six transfer to the A-Main which will start 24 cars.

Tickets are currently available in a range of different prices at www.indoorautoracing.com or at the venue box office in advance or the day of the events.