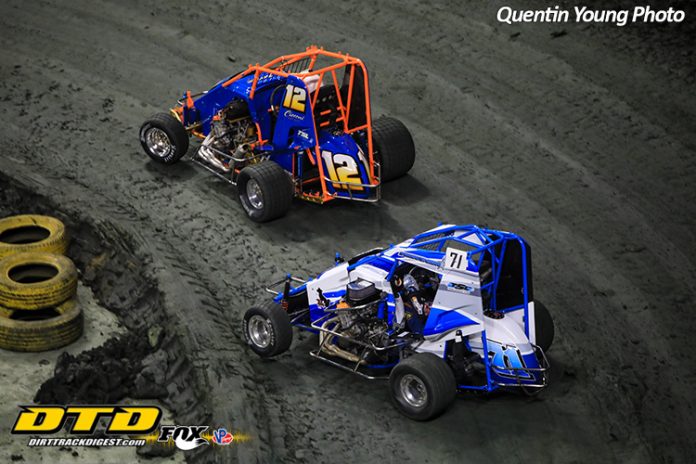 The practice session for the drivers and teams entered in the third annual East Coast Indoor Dirt Nationals this weekend inside Cure Insurance Arena in Trenton, NJ saw 62 of the 92 registered drivers and teams take to the clay.

Bednar, a regular in the SpeedSTRs at Kutztown, PA, and an Indoor Auto Racing Concrete Series veteran, was fastest in the first hot laps session, posting a 9.460 time. Doug Snyder of Hellertown, PA and Austin Quick of Etters, PA, were close behind Bednar for fast time in session one.

The second session was paced by Strada, who clocked in at 9.468 seconds. Carl Locuson of Pines Grove, NJ, one of three brothers entered in the Dirt Track Nationals was second quickest and Alex Bright of Collegeville, PA, driving one of three Micro Sprints owned by Bob Hummer, was third fastest.

The changing nature of track conditions between the two sessions was illustrated by the fact that only Strada was able to post top ten times each of the sessions.

Erick Rudolph, Ransomville, NY and the defending race winner of the ‘Nationals’, ran 22nd and 37th quickest in the pair of sessions.

Rudolph’s Tom Fraschetta teammate, Brian Montieth, of Phoenixville, PA, Lincoln Speedway 410 Sprint champion, will be trying to qualify Friday, will then race in Lincoln Speedway’s 410 Sprint opener Saturday afternoon, and then head for Trenton Saturday night as soon as the Lincoln race ends.

Kidd will suit up in the same car he drove to victory in the 2017 running of the Nationals and Wight will drive Ken Vincent’s Delaware-based Micro Sprint. Vincent contacted Wight after his regular driver Luke Thomas was unable to race due to back injuries suffered late in the 2019 outdoor season. Wight was a competitor in the mid-January Chili Bowl in Tulsa, OK.

Friday’s Micro Sprint schedule, which will have spectator doors opening at 6:00 pm, will start at 7:00 pm and feature ten heat of 10 laps. Passing points will be awarded with the top 60 moving to a four-race series of A-Main qualifiers of 15 laps in length. The top three from each of the four A-Main qualifiers advance to the A-Main Saturday.

Ultimately, the top 24 cars and drivers will take the green flag in the third annual East Coast Dirt National A-Main which will be run over a 50-lap distance and paying the winner $5,000.