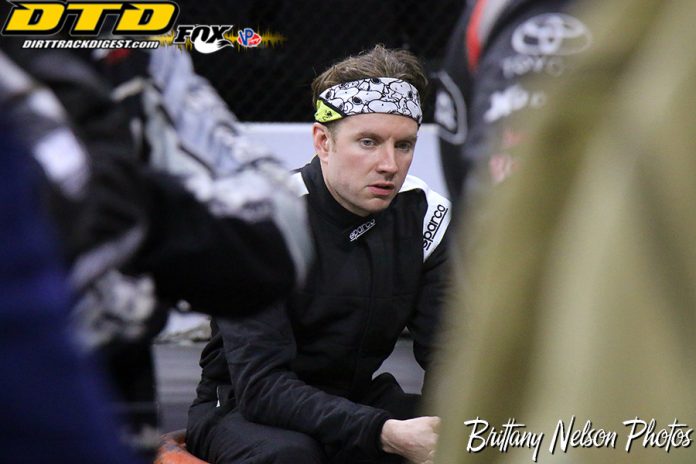 As a result of the cancellation, the 2020 BELFOR Property Restoration “Concrete” Series champions were crowned based on the current point standings.

TQ Midget driver Andy Jankowiak, Champ Kart king Tyler Brown and Slingshot ace Scott Neary, who were leading in Series points heading into Syracuse, have been declared champions of Indoor Auto Racing Championship Series fueled by VP Racing Fuels.  It is the first championship for each.

“This isn’t the way I wanted to win this championship,” said Jankowiak, who drove over two hours east from his home in Tonawanda, N.Y. to pick-up the award on Friday afternoon at the Exposition Center.  He arrived inside the building as the last of the concrete blocks that had made up the indoor track were being loaded on a flatbed trailer.


“I really invested myself in this deal this year, I wanted this championship bad,” emphasized Jankowiak. “That’s why this is so hard. I think we were ready to go prove we deserved it.”

Jankowiak’s prize ‘The TC Cup’ is named after the late two-time champion Ted Christopher who passed away in a plane crash in September of 2017 at the age of 59.

“Ted meant so much to so many of us and the fact I got to race him for this championship and now win the Cup in his name means the world to me,” reflected Jankowiak.

Janisch described himself as being “very disapppointed” at not having had the opportunity to contest for the title he lost by just one position in any of the two events that were held inside Allentown’s PPL Center or the one in Atlantic City’s Boardwalk Hall.

Erick Rudolph, a four time series champion, finished third 14 points behind Jankowiak but within striking distance of the title had the two features scheduled in Syracuse, N.Y. been held.

After the crowning of the 2020 series champions, the focus now shifts to the 2021 Indoor Auto Racing Championship Series.   The series will return to the same venues with stops in Allentown, PA at the PPL Center January 8 & 9, Atlantic City, NJ at Jim Whelan Boardwalk Hall on January 29 & 30, Syracuse, NY at the Exposition Center on March 12 & 13.   The series will again have a special non-point “Dirt event” on February 19 & 20 at the Cure Insurance Arena in Trenton, NJ.

Plans are also in the works to make-up the cancelled Syracuse Indoor Race, with a possible fourth concrete event in 2020/2021.