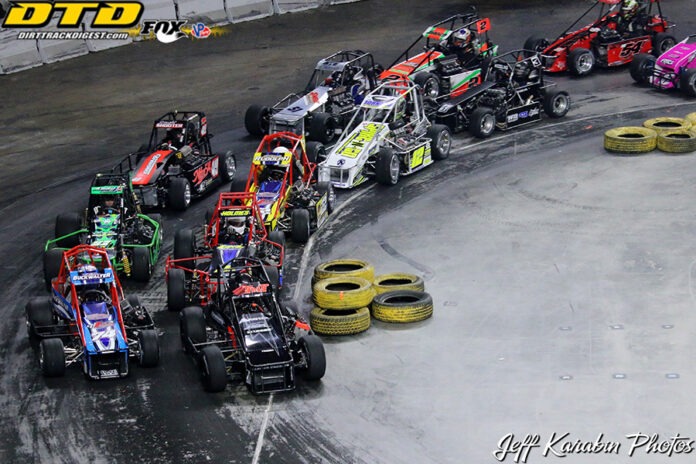 ATLANTIC CITY, NJ – The track is built and the Indoor Auto Racing Series is ready to go racing inside Atlantic City, NJ’s Boardwalk Hall for the 19th running of the NAPA KNOW Racing Weekend this weekend, Friday and Saturday Jan. 28-29.

On Wednesday, series staff completed the construction of the race track and race teams began arriving to park their trailers in anticipation of Thursday night’s open practice session that is open to only those who purchase a weekend pit pass.

Over 130 competitors, spread over the three divisions of racing, TQ Midgets, Slingshots and Champ Karts have filed entries for the prestigious event.

The TQ Midget entry list reads like a Who’s Who in auto racing including four drivers who have won the past nine Saturday night 40 lap Gambler’s Classic.

Three-time and defending NASCAR Whelen Modified Touring Series champion Justin Bonsignore returns to the series to drive Jason Simmons’ No. 98 TQ, the same car that was driven to a Qualifier victory and a top ten A Main feature finish in Allentown, PA two weeks ago by Billy Pauch, Jr whose sister is getting married on Saturday.

The PA Posse will be out to win the Gambler’s Classic for the first time in 12, just the third time in history. Matt Janisch of Nazareth or Tim Buckwalter of Douglasville could be just the guy after constant up front finishes. Jansich’s teammate, noted Young Gun Briggs Danner of Allentown and Pat Bealer of Leighton are also expected to be in the hunt.

Recent entries from Dylan Woodling in a radical TQ Midget he debuted in Atlantic City in 2020 and Kalamazoo, MI driver Grant Valkner in a Lou Cicconi TQ will also be someone to keep an eye on.

In the Champ Karts, Doug Stearly, Trappe, PA, will be bidding for a third straight A-Main Gambler’s feature victory. Stearly also has fielded an entry to race in the TQ Midget field.

Among those who will be contending for the win with Neary is Morgan Rochelle-Bealer, who was crowned Aqua-Duck Water Transport Ms. Motorsports 2022 on January 22 in Oaks, PA.

Rochelle-Bealer made her first Indoor Slingshot start on Jan. 9 in Allentown, PA and finished 15th in the feature. Were she to win the A-Main in Atlantic City, she would be in the unprecedented position of receiving and presenting the race trophy.

Good seats for both night remain available at Ticketmaster, a direct link is available from the series web-site, indoorautoracing.com, or daily at the Boardwalk Hall Box Office where the price is increased by $5 the day of the event.

After this weekend’s Atlantic City’s events the series will conclude in Syracuse, N.Y. at the New York State Fairgrounds Exposition Center on Friday and Saturday, March 11 & 12. Those tickets are on sale and available to purchase through a link on the series website www.indoorautoracing.com.

In anticipation of another wildly successful event, promoter Len Sammons has booked Friday and Saturday, January 27-28, 2023 in Boardwalk Hall for the 20th running of the NAPA KNOW HOW Gambler’s Classic.