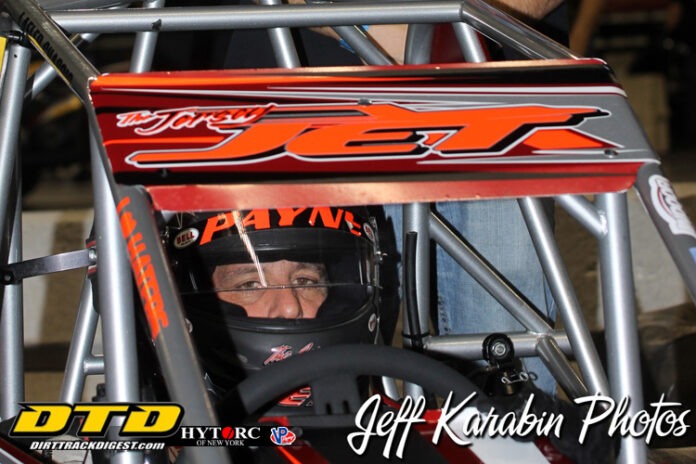 SYRACUSE, NY – Joey Payne, of Brick, NJ, one of the most accomplished Supermodified, Midget and TQ Midget drivers in the northeast, has filed an entry for the Indoor Auto Racing Series fueled by VP season finale. The BELFOR Property Restoration series race sponsored by Indy Kart Raceway will be held at the New York State Fairgrounds Exposition Center on Friday and Saturday nights March 11-12.

Payne is entered to drive Bobby Webber’s No. 19 last driven by Justin Bonsignore in the 2019 Syracuse Indoor inaugural. Bonsignore won one of the two features in 2019 but lost the Indoor Auto Racing Series championship when he crashed out of the decisive Saturday feature.

Payne missed his first Indoor Auto Racing Series race ever this past January. He is a past two-time winner of the NAPA KNOW HOW Atlantic City Gambler’s Classic (2004, 2007).

The Webber TQ has not turned a wheel since the Syracuse events three years ago and has been in Webber’s New Hampshire shop since that weekend.

Payne is a past ATQMRA outdoor driving champion and has enjoyed years of past success with the NEMA Midget organization in New England. His son Anthony, won an Indoor Auto Racing Series feature, in the lone Albany, NY Indoor race, driving for car owner Mike Murray. The Murray TQ is now driven by Mike Bednar.

The initial goal for the Payne & Webber duo is to excel in the Friday night Triple Twenties TQ Qualifiers. These events have historically produced some of the most exciting moments for spectators and the most tension filled, nerve-racking moments for race drivers and their teams.

Oswego Speedway and Circle T Enterprises Ready Mix Division have signed on to sponsors those exciting Friday night Triple 20s which allows every TQ Midget competitor a chance to run in a qualifier feature event paying $1,000 to win. Payne will be one of 50 TQ Midget drivers expected to run for the top prize.

Friday’s program beings at 7:30 PM with heat races for the TQ Midgets, Slingshots and Champ Karts. The fastest 12 from Friday afternoon qualifying will also make a run for the pole at night in a special knock out time trial session. The program will conclude with the three TQ Midget 20 lap qualifier features.

On Saturday racing begins at 7 PM with qualifying races for the three divisions followed by their feature events. The program concludes with the 40 lap TQ Midget season finale.

Ticket holders on both Friday and Saturday will have the opportunity to walk the pits before the action begins to meet drivers and see the race cars up close. Fan Fest hours start on Friday at 6 PM and Saturday at 5:30 PM.

Over 100 entries have already been filed by TQ Midget, Champ Kart, and Slingshot teams with the TQs accounting for half that number.  The late entry of Payne follows the recent announcement of NASCAR Whelen Modified Touring Series standout Timmy Solomito of Islip, NY moving behind the wheel of the new FX Caprara Cars No. FX1 TQ Midget.

Also at stake are the Indoor Series championships. Douglassville, PA dirt Modified driver Tim Buckwalter’s TQ Midget victory at Atlantic City along with a fourth at the opener in Allentown, PA brings him to Syracuse with momentum and a slim 15 point lead over Matt Janisch of Nazareth, PA

A New Yorker, however, has won the Indoor Series fueled by VP championship the last three years and won both TQ Midget features held back in 2019 when the series made its debut at the Fairgrounds Expo Center prior to 2020 and 2021 Covid cancelations.

That makes Scott Kreutter, who finished fifth in Atlantic City after an impressive charge from the rear of the field an odds on favorite. Kreutter, a dirt Sprint Car driver enters the event, third in the standings 26 points out of first place.

Kreutter, the owner of IndyKart Raceway located on 17 Miracle Mile Drive in Rochester, N.Y. and the race sponsor, will also have added fans on hand to cheer him on to victory and the title.

Defending series champion Andy Jankowiak of Tonawanda, NY will drive east to Syracuse fourth in the points after a disappointing AC finish, yet still very much in the title hunt.

The always exciting Slingshots have also been dominated by PA drivers Brett Bieber, Jared Silfee and Scott Neary, who have finished in the same order in both 2022 series races.

Tickets are available in a range of different prices through links on indoorautoracing.com. Tickets will also be available for each race night starting at 3 PM at the Exposition Center Box office the day of the events.   New York State has removed all restrictions in regards to covid-19, no masks are required.

Race fans can enjoy a double header weekend at the Fairgrounds with the 34th annual Syracuse Motorsports Expo and Trade Show being held at the Center Of Progress Building on the Fairgrounds on Saturday from 10 to 8 and Sunday 10 to 4.

For race fans who cannot make the trip to Syracuse to see the races in person, DirtTrackDigest.TV will be sending high-quality video coverage to subscribers from multiple cameras. The action will be called by the Indoor Auto Racing series veteran announcer Shane Andrews accompanied by Steve Ovens.

For up to date information and a like for advance tickets visit the Indoor Auto Racing Series web-site indoorautoracing.com.