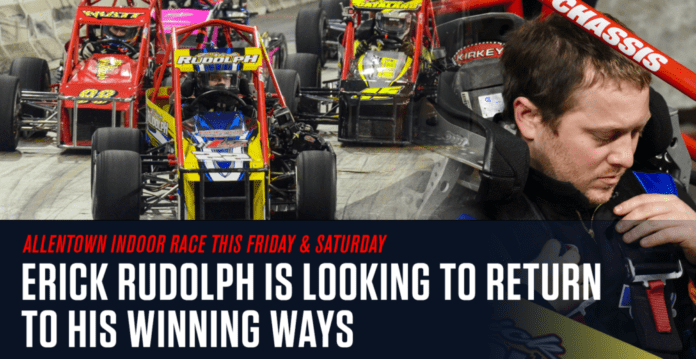 It wasn’t a lack of speed nor talent, but luck. In a position to win both, in Atlantic City and at the 2022 series finale in Syracuse, N.Y., Rudolph’s good luck that had followed him for so many years left him, and he got spun around and went to the rear both times.

A two-time winner at Allentown in the past, Rudolph’s hopes for a fifth title could begin to be assembled this weekend with a victory in Saturday’s Future Home sponsored program headlined by a 40-lap feature.

When the Indoor Auto Racing Series fueled by VP takes the green flag this weekend inside the PPL Center in downtown Allentown, many lingering off-season questions will be answered.

The Ironton Global sponsored two-day event on Friday and Saturday, January 6 and 7 is just one of two race weekends that make up the BELFOR Property Restoration series this year.

Good seats remain for the Allentown race weekend. They can be purchased online through a link on the show website, indoorautoracing.com, or at the box office on the day of the event. For those who cannot attend, the event will be available on DTD Pay-Per-View for $64.99 for the weekend or $29.99 for Friday, and $39.99 for Saturday.

In Allentown on Friday night racing begins at 7:30 PM with the TQ Midgets headlined in three Ironton Auto Body A-Qualifier main events. The top three in each event locks into Saturday’s main event and the Dash.   The winner of each of these races will now receive $1,000 thanks to Ironton Auto Body and the Dash winner another $500!

Saturday’s events, sponsored by Future Homes, begin with FAN FEST when the doors open at 5 PM. Racing begins at 7 PM headlined by a 40-lap TQ Midget feature. The Champ Karts and Slingshots run complete shows with features on both nights.

After Allentown, the series then moves to Atlantic City for the 20th year under Len Sammons Productions.  The NAPA KNOW HOW weekend will feature a first-ever “Double Down” schedule, with two Gambler’s Classic races for the TQ Midgets being held, one on Friday night and another on Saturday night.