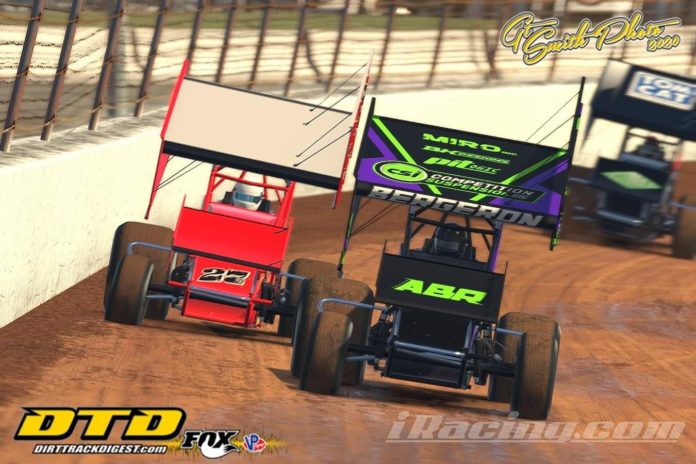 SYRACUSE, NY – Waverly, NY’s iRacing star Bryce Bailey pulled off a last lap, all out up against the wall pass of perennial iRacing Champion Alex Bergeron to win the Lucas Oil Empire Super Sprints King of the Quarantine 40. The event was attended by 41 competitors from seven states and two Canadian provinces held at the Dirt Track at Charlotte.

Bergeron, from Drummondville, Quebec, was looking for the clean sweep like he did in the first running of the King of the Quarantine Series held at Eldora. He set fast time and won his heat going into the $100 to win, 40 lap A-main.

Bergeron took the lead at the drop of the green flag with second generation, Jake Karklin and Bailey in tow. The first of only two yellows came out on lap two when several cars got together coming off turn four.

On the restart, Bergeron took control again with Karklin and Bailey trading the runner-up slot with Jordan Poirier and Reed Whitney following. Bailey eventually slipped by Karklin and took up the chase on Bergeron.


The race stayed green until a lap 16 caution for two cars getting together on the back stretch. This set up the final double file restart with Bergeron getting the advantage over Bailey. The leading duo settled down on the bottom as laps click by.

With just five laps to go, Bailey took to the top and started to close the distance. Each lap the gap closed and when the two lap to go signal was given it was anyone’s race. It all came down to the last lap when Bailey got a good run off turn four and shot around the Bergeron sprinter.

Bergeron gave it a shot to get Bailey back but the checkered flag waived over the family colored #27. Bergeron took second with Rylin Turley coming from his 23rd starting position to third and earn hard charger honors. Shilo Boyce and Bobby Hackel rounded out the top five. The next five was made up of sprint car ace Brent Marks, Karklin, who got tangled up with a lap car on the last lap to take seventh, Trevor Years, Bryan Zyck and GT Smith.

Heats were won by Bergeron, Adam Buchanan, Bailey and Karklin., C-Main to Paulie Colagiovanni and B-Main to Joe Trenca.

Thanks so much to our sponsors!