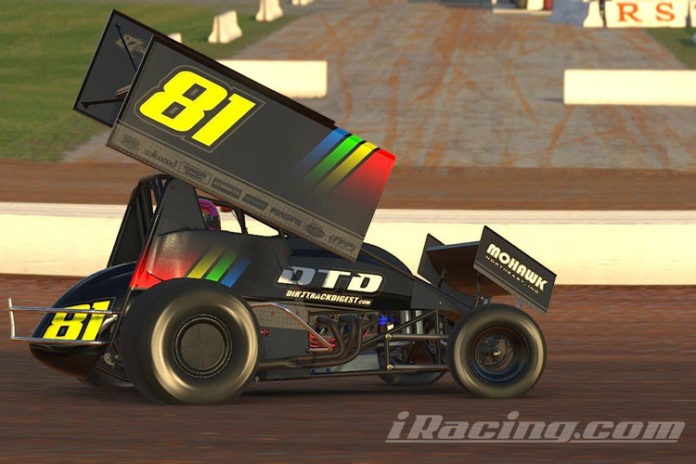 BREWERTON, NY – As part of the Billy Whittaker Cars & Trux Confinement Classic presented by Dirt Track Digest, entries to make one of two preliminary nights were capped at 95. All other received beyond that were added to a special program to be run on Wednesday, April 22.

That being said, nearly a full field of 60 iRacers are ready to try and race their way into Friday night show at the virtual Eldora Speedway for the 410 Sprint Cars. Only five drivers will be guaranteed a slot into Friday’s program. The iRacers that finish in the top five of the special 25 A-Main-event will be the last five drivers to make up the Friday night entry list, which features a mix of ‘invites’ and iRacers.

This event will NOT BE BROADCAST LIVE. Live broadcasting of the Billy Whittaker Cars & Trux Confinement Classic presented by Dirt Track Digest begins on DIG Race Products Qualifying night on Thursday. Drivers competing on Wednesday night begin their quest for a spot in to the Burton’s Logging and & Equipment Friday night show at 9 p.m.


The Billy Whittaker Cars & Trux Confinement Classic presented by Dirt Track Digest is an iRacing event being held at the virtual Eldora Speedway. The entire program will be broadcast live through the Dirt Track Digest Facebook page and on DirtTrackDigest.TV in full HD with racing beginning at 8 p.m. on Thursday, April 23 for DIG Race Products Qualifying Night and for Burton’s Logging & Equipment Qualifying Night on Friday, April 24. The Saturday night program begins at 7 p.m. The feed features a Dirt Track Digest TV Xtra format with live scoring and in race commentating from the Ground Control Lawn and Snow Studios with Northeast announcers Shane Andrews and Mike Mallett.