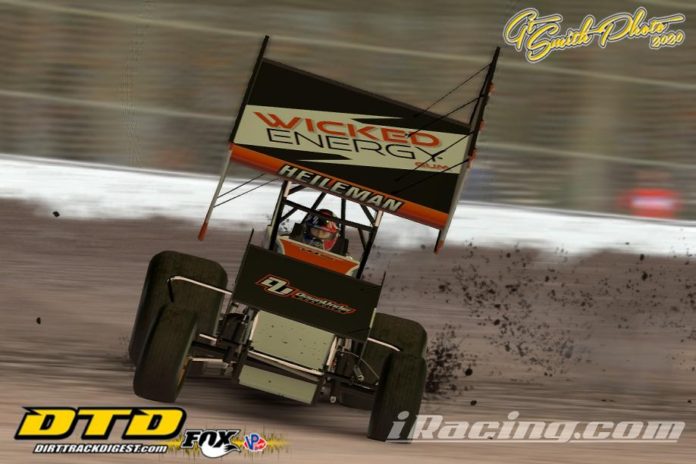 The top-five lucky finishers from tonight’s Go to Confinement 25 tagged onto the already large field of 55 entries for Friday night’s prelim to total the field out at 60 for the first ever Billy Whittaker Cars & Trux Confinement Classic at the virtual Eldora Speedway.

David Heileman from Milwaukee, Wisconsin started on the pole and led tonight’s event from wire-to-wire. Heileman was confident in his performance in tonight’s event stating, “Yeah, I pretty much swept the night, the car from Slick SimSport was good, and I knew Nelson (Webster) was going to be fast. I just had to get out front and run smooth, and then hide some speed for the rest of the weekend.”

With the caution flag flying with two laps to go, there was no room for error for Heileman or any other leader.

“On that last yellow, I left the door open in case anyone wanted to shake it up, but we all played it safe in the end,” Heileman stated.


Folsom, California, native Nelson Webster from Tony Stewart Racing started his night and finished his night in second place. Webster spent most of this evening’s race battling with Kinser Racing entry, Cole Neuhalfen. Neuhalfen started the event in fifth place and ended up third on the evening.

Brian J Cross, the other Tony Stewart Racing entry alongside Webster, started third and finished one spot back in fourth. Joel Berkley, all the way from Queensland, Australia, started fourth and found himself battling for the transfer spot with Alex Stoudinger. Berkley was able to put a late slider on Stoudinger to claim fifth place, putting him right on the transfer cusp.

The top five finishers all started within the top five, leading to a tight-knit pack of race cars all night long. They left Heileman with no breathing room to make a mistake, however, no one was able to make a move on him.

Throughout tonight’s exciting event, there were three cautions in total. The Confinement Classic officially kicks off tomorrow for the first of two preliminary nights, with entry lists available for viewing on Dirt Track Digest.

The Billy Whittaker Cars & Trux Confinement Classic presented by Dirt Track Digest is an iRacing event being held at the virtual Eldora Speedway. The entire program will be broadcast live through the Dirt Track Digest Facebook page and on DirtTrackDigest.TV in full HD with racing beginning at 8 p.m. on Thursday, April 23 for DIG Race Products Qualifying Night and for Burton’s Logging & Equipment Qualifying Night on Friday, April 24. The Saturday night program begins at 7 p.m. The feed features a Dirt Track Digest TV Xtra format with live scoring and in race commentating from the Lawn Control Ground and Snow Studios with Northeast announcers Shane Andrews and Mike Mallett.