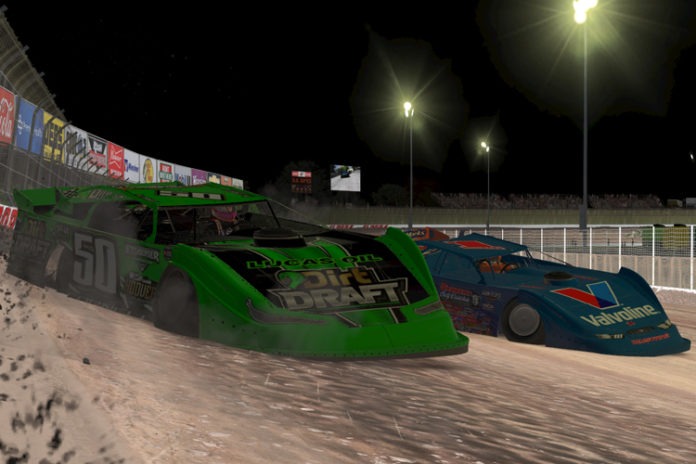 For Cornell, his victory came one night after coming so close in an Invitational race at Eldora. On Tuesday night, he took advantage of a mistake by the late-race leaders and swiped the top spot away with just a pair of laps remaining to collect his long-awaited first World of Outlaws Morton Buildings Late Model iRacing victory.

Cornell, known to the Outlaws iRacing circuit for his always-happy attitude and gleeful post-race interviews, was immediately overjoyed with the big victory.

When asked about the winning move by CBS Sports host Dave Rieff in the post-race interview, Cornell excitedly replied, “I have no clue! I don’t know what it looked like, but it was chaos from my screen.”

In fact, the on-track action was rather chaotic throughout the entire 35-lap contest. Right from the drop of the green, the yellow flags flew, and Cornell was caught right in the middle of it.


After spending most of the first 10 laps under caution for two multi-car wrecks on the backstretch, Cornell got an excellent run off the top side of Turn 2 on a Lap 10 restart and thread the needle between then-leader Matt Cosner and Ashton Winger down the backstretch for the lead. But, some contact between the three was made in the process and Cornell was left almost completely sideways, heading for the outside wall as the field raced into Turn 3.

But Cornell was able to gather it back in without bringing out the yellow or losing wholesale positions, and immediately put it back on the top side and began his charge to the front. At his lowest point, Cornell sat as deep as 13th in the running order. But as the laps clicked off, Cornell began to pass more and more cars.

By the final restart with four laps to go, Cornell had come all the way back up to fourth. He stuck his DirtDraft #50 on the top side for one final dash to the finish and made the most of it, passing Mike McKinney for third with three-to-go, then taking advantage of wrecking leaders Winger and Nick Stroupe one lap later for the lead, and the eventual win.

With the epic comeback complete, Cornell was only beginning to soak-in what had happened on-track as he explained to Rieff and fellow announcers Kenny Wallace and Johnny Gibson in the post-race interview what was actually happening outside his house.

“I’m in Willard, Missouri, and we just went through a tornado warning! I was just praying the lights didn’t come off my dang house,” Cornell again said with excitement. “This is awesome! What a deal! I’m pumped!”

Thankful the strong storm didn’t damage his house, Cornell had only a brief, yet energetic explanation to Gibson of what was going through his mind on the final restart.

“Just full send, just gotta go,” he said. “I got wrecked earlier but I think it was just a racing deal, no one’s fault, really. But you just gotta get after it here, I love it. Up on the wheel, it was awesome!”

Coming from 12th to seventh in his first iRacing Late Model Feature start, eventual Sprint Car winner Schuchart said he really had a blast in the full-fendered cars.

“You gotta get through the carnage first, but hey, I’ll take it for my first time in a Late Model, it was fun. Definitely gotta stay away from the crashes,” Schuchart said.

Logano also had a blast for his first time with the Outlaws in the iRacing Late Model, and even gave a shot to his other NASCAR buddies in a post-race reaction video he posted on his Twitter account.

“Here’s the main thing I took away from this – Austin Dillon finished 16th. So, of the NASCAR guys, not that bad,” Logano added with a lighthearted smirk into the camera after besting Dillon by one spot.