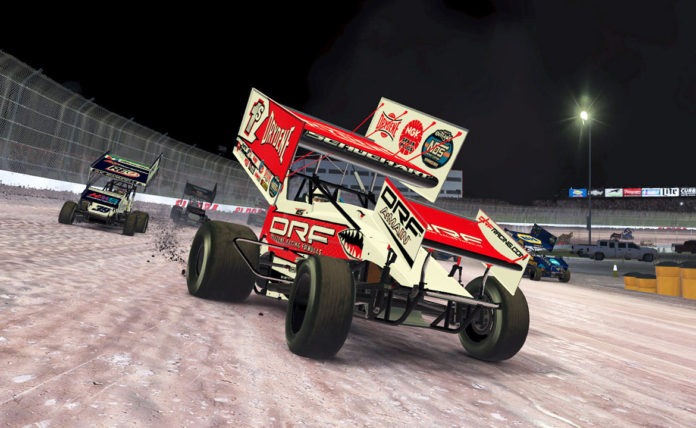 CONCORD, NC – Eldora Speedway never disappoints, and that clearly holds true for virtual racing, too. While fans wait for the real dirt to fly, Big E provided a rush of adrenaline during the World of Outlaws: eDirt Racing Shootout debut Tuesday night on CBS Sports Network.

The start of the NOS Energy Drink Sprint Car eDirt Racing Shootout Feature saw NASCAR Xfinity Series standout Briscoe pulled away from the field as drivers behind him went three and four wide, arguing over positions second through fifth.

Swindell became the benefactor of the battle, splitting the gap between Brad Sweet, Max McLaughlin and Robbie Kendall to launch his #39 Swindell Speedlab car into second. The two-time World of Outlaws iRacing Invitational winner was then on the hunt for Briscoe.

Twelve laps into the 35-lap Feature, Briscoe pounced off the wall off Turn 2 and slid down into Swindell, who was underneath him going for the lead. The two cars locked and slid sideways going into Turn 3, stacking up the field and bringing out the caution.


Swindell and Briscoe held their positions up front, but Swindell now had the lead. He, like Briscoe before him, pulled away from the field while the top-five traded positions amongst themselves every lap.

With 15 laps to go, as Briscoe, Sweet and Balog slowed each other’s momentum while battling for second, Schuchart held the throttle to the floor and fired his Drydene #1a car into the runner-up spot.

Schuchart, a two-time World of Outlaws winner in real life at Eldora, knew exactly what to do to catch Swindell.

“I just kind of used the same line that I used in real life last year at the Kings Royal,” said Schuchart, who powered from 12th to second in the 2019 Kings Royal at Eldora. “It seems to work on this thing.”

He ran the top, putting his right rear tire on the cushion, inches from the wall. That helped him run down Swindell in seconds. Once he caught him, he tried a slide job on Swindell in the first corner, but Swindell charged back by him the next turn.

A couple of cautions got in the way of their battle, but on a restart with five laps to go, the two drivers put on a Sprint Car racing clinic, virtual or not. Schuchart would launch his car ahead of Swindell one corner and Swindell would slide back by him the next. They crossed the finish line separated by thousandths of a second each lap.

With two laps to go, Swindell bounced off the cushion just enough to give Schuchart the advantage to clear him off Turn 4. However, Swindell wasn’t finished. “The Bulldog” stayed close to Schuchart and looked underneath him coming to the checkered flag.

Schuchart had the better momentum off Turn 4 and edged Swindell at the line by 0.25 seconds.

As fast as everyone’s heart was beating by watching the spectacular finish, Schuchart’s adrenaline was up just as high.

“My heart is going, I feel like I just got out of a real car,” said an out of breath Schuchart. “That was a great race with Kevin. That was really cool. We were able to race each other real clean. It was a lot of run. It’s real cool to win one of these things.”