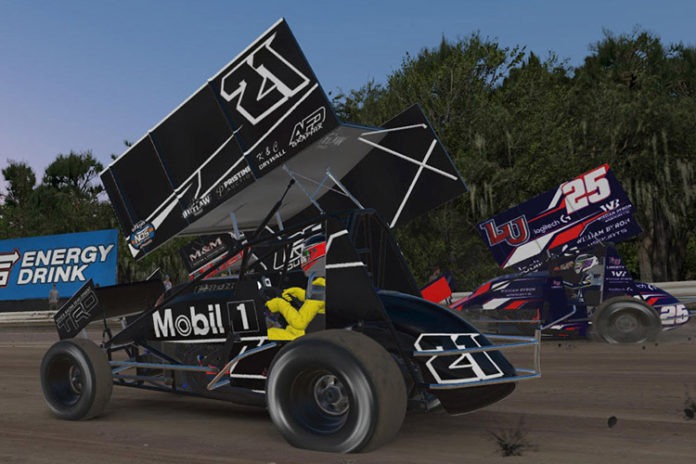 BARBERVILLE, FL — The “World of Outlaws: eDirt Racing Shootout” on CBS Sports Network is the latest big event to race at Florida’s Volusia Speedway Park, the “World’s Fastest Half-Mile” and home to the DIRTcar Nationals each February. On Tuesday night, it became home to a thrilling display of virtual speed and mud-slinging competition with stars from the World of Outlaws NOS Energy Drink Sprint Cars and World of Outlaws Morton Buildings Late Models battling drivers from NASCAR, the NHRA and even a two-time Indianapolis 500 winner.

DIRTcar UMP Modified ace Mike McKinney swiped the lead on the final restart in the Morton Buildings Late Model Feature with less than five laps remaining to collect his third overall World of Outlaws iRacing victory. In the second half of the doubleheader, NASCAR Cup Series star and three-time Chili Bowl winner Christopher Bell put a hurting on the World of Outlaws NOS Energy Drink Sprint Cars for his second victory at virtual Volusia and third win overall in the series.

The 35-lap Morton Buildings Late Model Feature started off with a quick caution for NASCAR Cup Series star Austin Dillon, which re-stacked the field and put dirt track racers Matty Watkins and Corey Gordon on the front row. Watkins, of Atlanta, GA, led the first nine laps before giving up the lead to Gordon as he slipped up the track entering Turn 1 on Lap 10.

Gordon, of Charlotte, NC, raced into the lead out of Turn 2 as McKinney went with him under Watkins and began his pursuit of the top spot. Gordon pulled out to over a one-second advantage before the next caution flag, as another star of the race had already begun to emerge.

Two-time World of Outlaws iRacing Late Model winner Trent Ivey, of Union, SC, was flat-out on a mission, coming all the way from the 19th starting spot up to sixth before the restart. He got a great jump as the field was brought back to green and scooped up two more spots before the final caution. In the end, Ivey came home third and picked up the Penske Racing Shocks Hard Charger honors.

McKinney was still in hot pursuit of leader Gordon down the stretch, flexing his real-life dirt track muscles to set up for a wild battle to the finish with Gordon. It even impressed CBS Sports broadcast guest Kenny Wallace, a fellow DIRTcar UMP Modified competitor with McKinney, who noted the exposure McKinney was getting from racing on CBS Sports Network.

Wallace was rewarded for his enthusiasm. With just four laps remaining, Gordon led the field to the green and appeared to have gotten the jump he needed to defend the lead heading into Turn 1, but he appeared to slip slightly up the track, just enough to leave McKinney a lane to slide by to his inside.

McKinney took the bottom lane and drag-raced Gordon down the backstretch. Gordon received contact from behind going into Turn 3 and slipped up, allowing McKinney to pull away. That sequence proved to be the deciding moment as McKinney drove his NOS Energy Drink #96 the rest of the way home to collect his third Morton Buildings Late Model iRacing victory.

“We had a heck of a race,” McKinney told Wallace in the post-race interview. “I thought I was just gonna settle in for second. Corey [Gordon] just got tight there on that restart and we were able to sneak on under and drive off with the win. I’m super pumped.”

Gordon had a similar view of his run into Turn 1 on the final restart. Ironically, he was able to recover from a bad restart while leading Monday night’s race at virtual Volusia and hang on for the win, but he was not so lucky this time around.

“I’m just the king of choking on these late-race restarts,” Gordon said. “I got a pretty good start there and then got real tight going into Turn 1. Congrats to Mike McKinney on the win.”

Two-time and defending World of Outlaws Morton Buildings Late Model Series champion Brandon Sheppard piloted the studio sim rig in front of the CBS Sports camera, and had a great drive from 16th to finish ninth.

“In the very beginning, I got caught up in a wreck and I had to come into the pits and get a quick fix,” Sheppard said. “It just put me behind. I felt like I kept my nose pretty clean after that and came up through there pretty good.”

Sheppard’s got 56 career World of Outlaws Feature wins in his real car, and told Kenny Wallace how much of a difference there is from the real car to the virtual one.

“You can feel a little bit in the steering wheel. Some steering wheels are better than others. The biggest thing is you’re missing that feel in the seat that we’re all used to feeling,” Sheppard said.

In the World of Outlaws NOS Energy Drink Sprint Car portion of the eDirt Racing Shootout, Bell proved once again he’s the biggest gator in the pond at the “World’s Fastest Half-Mile.”

He started fifth and methodically worked his way up through the top-five as drivers traded slide jobs and battled three-wide at times for position.

At the start of the 35-lap Sprint Car Feature, polesitter Brian Brown jumped to the early lead, leaving Brent Marks and Bell’s fellow NASCAR competitor William Byron to duel for second. Bell rolled the bottom, while everyone else fought for real estate up high. His method put him in third after two laps.

On a restart with 23 laps to go, Bell built momentum around the high side of the first corner and used it to launch his car underneath Brown going into Turn 3. He had the lead by the exit of the corner, but Brown was building a run behind him. By the time they reached Turn 1, Brown fired his white #21 underneath and slid up in front of him by three car lengths.

However, for what Brown gained on the entrance to the corner, he lost on exit. Bell had the stronger run down the backstretch and threw his final slide job of the night at Brown to take the lead and hold it for the remaining 22 laps. Bell, who finished second at Volusia in a real Sprint Car in 2019, used what he’d do in a real Sprint Car to guide him to the front.

“It’s crazy how realistic it has gotten,” Bell said about iRacing. “At Volusia, here on iRacing, there’s a really big cushion up against the guardrail. So, you try to run as straight as you can, and it seems to make speed up there.”

In the final 10 laps of the race, while Bell pulled away from the field, Marks, Brown and Byron traded slide jobs for second. With two laps to go, Byron made his way by Marks for the runner up spot and looked to hunt down Bell for his first World of Outlaws win. However, Bell was already a second ahead of the field.

“That was a lot of fun,” Bell said. “I’ve really enjoyed getting to race online during this mini off season we’ve had. It’s been really cool. I’m grateful that DIRTVision and CBS Sports and everyone puts on these races. World Racing Group, World of Outlaws allows us to race. It’s cool to race in front of an audience all of the time and obviously with no racing going on.”

The World of Outlaws NOS Energy Drink Sprint Car Series will go from virtual to reality on Friday, May 8 when the Series returns to racing at Knoxville Raceway on DIRTVision.

Then the World of Outlaws will return its iRacing Invitationals on Sunday, May 10 with the NOS Energy Drink Sprint Cars and Monday, May 11 with the Morton Buildings Late Models. Both races will be at the virtual Dirt Track at Charlotte on DIRTVision at 7 p.m. (ET). And on Tuesday, May 12 will be the third round of the “World of Outlaws: eDirt Racing Shootout” on CBS Sports Network at 8 p.m. (ET).