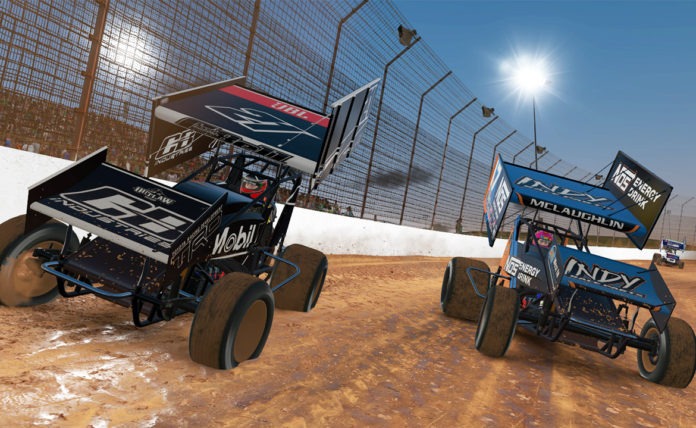 CONCORD, NC – As the World of Outlaws return to racing, the third round in the trilogy of “World of Outlaws: eDirt Racing Shootout” events on CBS Sports Network Tuesday night gave fans an explosive battle to the finish worth their while.

The iRacing invitational event at The Dirt Track at Charlotte saw NASCAR star Christopher Bell and Super DIRTcar Series standout Max McLaughlin wage a war of slide jobs for the final three laps, trading the lead every corner. At the end, Bell claimed his fourth World of Outlaws NOS Energy Drink Sprint Car iRacing win and second in a row. Before their battle, 19-year-old Kaeden Cornell claimed his second World of Outlaws Morton Buildings Late Model iRacing win in another epic showdown to the finish.

The intense action in the Sprint Car race was non-stop throughout the 35-lap Feature. McLaughlin started on the pole in the NOS Energy Drink #17 and jumped to the early lead. However, Bell — who already had one iRacing Invitational win at The Dirt Track — and Williams Grove Speedway iRacing Invitational winner Robbie Kendall pressured him early.


After a restart eight laps into the race, Bell dove underneath McLaughlin and Kendall in Turn 3 and stole the lead from them exiting Turn 4. Kendall kept Bell in sight but hit the wall and handed the runner-up position to McLaughlin.

The next 20 laps became a Bell and McLaughlin show. Both rode the cushion against the wall the entire way around the virtual 4/10-mile track. McLaughlin tried a slide job on Bell but couldn’t complete it, allowing the black #21 to pull away. He then hit the wall with his right rear tire, seeming to hand the race to Bell.

However, a caution with 10 laps to go set up the most exciting final showdown in all of the World of Outlaws iRacing events this year. Bell got a good jump on the restart, pulling away from McLaughlin by a few car lengths. McLaughlin didn’t waste any time to catch back up to him, though. Within a lap, his NOS Energy Drink car was back on Bell’s bumper. He followed him for a couple of laps, waiting to make his move.

During the final three laps of the race, Bell and McLaughlin traded slide jobs and the lead every corner. McLaughlin would lead down the backstretch, while Bell always took the lead back down the front stretch.

On the final lap, Bell’s car wiggled off Turn 4 and he ran into the side of McLaughlin down the front stretch. McLaughlin held the lead to Turn 3 before Bell threw a final slide job at him and reclaimed the lead for the final time. McLaughlin made a charge back underneath him to the finish line but came up short by 0.035 seconds.

“I hope the fans enjoyed that one, because that was a hell of a race from where I was sitting,” Bell said. “Max was outstanding there. It was pretty tough. The cushion got dirty and marbled up and slick and it was hard to run.”

Bell totaled $4,000 in winnings between his four World of Outlaws iRacing Invitational wins. And while McLaughlin came up short of getting a win of his own, he still enjoyed him time in the virtual Stenhouse Jr.-Marshall Racing car.

“It is what it is,” McLaughlin said. “If you’re going to lose to anyone it might as well be Christopher Bell. It was a great race. I had a ton of fun. I can’t thank you guys (World of Outlaws and CBS Sports) for putting this on, making the most of this quarantine. This was great. I wish we had more green flag laps to go at it a little more, but I guess you can’t ask for a better race for the fans.”

Before that exciting Sprint Car finish, the Morton Buildings Late Models had their own edge-of-your seat battle over 35 laps that ended with another repeat winner on CBS Sports Network, Kaeden Cornell.

Just two weeks after his CBS win at virtual Eldora Speedway, Cornell, of Willard, MO, made a magical move on Charlotte’s red clay, swiping the lead away from Trent Ivey on a big slide job he threw in Turn 3 with just seven circuits remaining. Cornell had stayed up front the entire race, and soon found himself pacing the field under the final caution that set up a green-white-checkered finish.

As the field stepped on the throttle in Turn 4, Cornell got the best jump of anybody, rocketing down the front stretch and into Turn 1 with a massive advantage over Nick Stroupe and Mike McKinney, who both slipped by Ivey on the restart. The start he got even impressed CBS Sports broadcast guest host Kenny Wallace, who told Cornell it was the move that won him the race as they spoke in the post-race interview.

“Whenever that dang caution came out there, I was throwing stuff in here, man I was ticked,” Cornell responded to Wallace. “That start, it was like I had some kind of nitrous button or something. I couldn’t ever do that again if I tried!”

As the field went into a frenzy behind him, Cornell was smooth sailing out front. Untouched, he led the field back to the checkered flag for his second career World of Outlaws Morton Buildings Late Model iRacing win on CBS Sports Network.

He was fast, patient and very well-deserving of the win. But above all else, Cornell was thankful for his supportive sponsors and the opportunity to race on national television.

“I can’t thank everybody enough that helps me with this deal. You guys for putting this on for us while this whole virus deal is going on is just super awesome. CBS, the World of Outlaws and everybody with them, I just can’t thank them enough,” Cornell said.

In the final circuits after the restart, a huge dogfight broke out between the rest of the top-six, and McKinney was right in the middle of it. Coming from his eighth-place starting spot, the real-life DIRTcar UMP Modified star found his #96 NOS Energy Drink ride sitting fourth as the field came back to the green-white-checkered.

After avoiding contact in Turns 1and 2, McKinney threw a big slide job of his own to take the runner-up spot from Stroupe in Turn 3 and made it stick as he crossed the stripe under the white flag. He stayed up on the high side and out of the wreck behind him on the final lap to secure a second-place finish.

“We were really good,” McKinney said. “Just in Qualifying there, I got beat, straight up. We were a really good car, just kinda ran out of laps. Can’t complain.”

McKinney was also very thankful for his partners as he spoke with Wallace, and said he’s looking forward to getting back on the real track in the coming weeks.

“I’ve got to thank everybody at the World of Outlaws. They’ve given us a great opportunity to get our names out there on CBS and DIRTVision. It’s been an awesome time representing NOS Energy Drink, Bilstein Shocks and everybody else I got on board,” McKinney said.

The Illinoisan was victorious in last week’s eDirt Racing Shootout on CBS and wrapped up his second runner-up finish Tuesday night. Quite a successful iRacing campaign for the 26-year-old, and he’s enjoyed every minute of it.

“We all have a lot of sponsors we want to represent on national television and get our names out there,” McKinney told Wallace. “I feel like we’ve taken advantage of that opportunity and had a really successful tour here.”

After last Friday’s event at Knoxville Raceway, the World of Outlaws Return to Racing continues this Friday and Saturday with the World of Outlaws Morton Buildings Late Model Series invades Federated Auto Parts Raceway at I-55 just south of St. Louis, with both nights broadcast on DIRTVision. The World of Outlaws NOS Energy Drink Sprint Cars roll to I-55 the following weekend, May 22-23. Tickets for both events can be purchased at WorldofOutlaws.com.

World of Outlaws: eDirt Racing Shootout; May 12, 2020; Virtual The Dirt Track at Charlotte