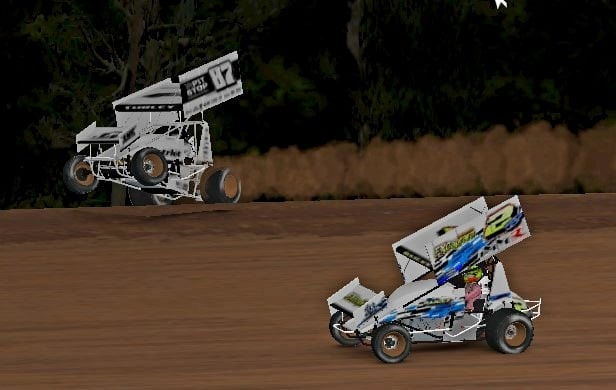 SYRACUSE, NY – Waverly, N.Y., teenage sensation Bryce Bailey continued his winning ways Tuesday night by capturing his fourth checkered flag in four events in The Sign Shop @Kinney’s Lucas Oil ESS iRacing Series.  While he did lead start to finish, on this night he was challenged by several competitors.

On lap 22, second place Rylin Turley threw a “slider” at Bailey going into turn one and led coming off two, but then slipped off the backstretch giving the lead back.  Luckily for Turley, the yellow came out for another competitor as he fell back to fifth.

“Rylin kinda caught me sleeping a bit, I was just trying to run my groove I’ve been all race but he was able to be right on me,” Bailey said of the challenge, “I actually think he had a faster car tonight.  We got a little lucky and when he did pass me I know I had to run a different line.”

Bailey moved to the middle lane at it worked for him to take another win, “After that I moved down and the car was faster,” he continued, “Rylin gave it a heck of run, it was a good race.”

Heat wins went to Bailey, Hile, Goldner and Turley, Kevin Loveys and Jake Karklin won the B-Mains.  Quick Time was done by Bailey.  There were 40 cars on hand for the night’s action.