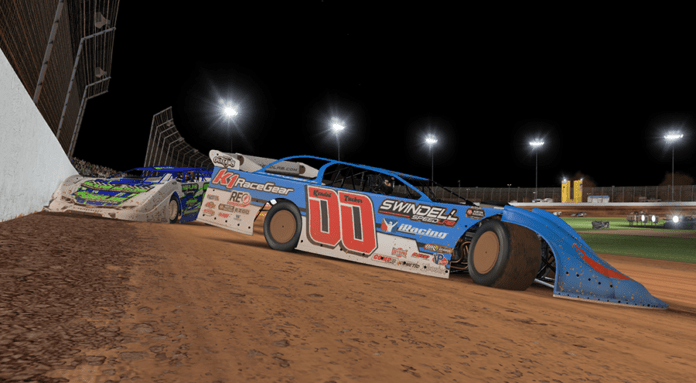 CONCORD, NC – If there’s one area of iRacing Dirt that Kendal Tucker really excels in on the DIRTcar eSports Tour, it’s surely with the Pro Late Models.

Holding off fellow iRacing Pros Dylan Houser and Evan Seay in the final laps, Tucker, of Mt. Airy, NC, scored his second career DIRTcar eSports Tour victory Wednesday night with the Drydene Pro Late Models at The Dirt Track at Charlotte after leading all but one lap en route to his $250 victory.

His previous Pro Late Model finishes with the Tour are impressive; three starts in three races and three podium finishes with a lone victory. Tucker experienced bad luck several times over the course of the Season 1 schedule, racking up a few “so close” moments that left him hungry for another trip to Victory Lane.

But to do it, he had to defend the top spot from one driver in particular, on a mission to finally put his name in the win column after several starts – Dylan Houser.

Tucker grabbed the lead from polesitter and Cometic Gasket Quick Time Award winner Sheldon Oberle on Lap 2 and rode the high line for the opening laps, until a caution came out with five laps complete. Tucker and his Swindell SpeedLab #00 then chose the bottom lane for the restart, and never strayed from it all race long.

“Probably one of the hardest things to do on here, in my opinion, is to stick that bottom,” Tucker told Tour announcer Chase Raudman after the race on the DIRTVision. “There’s a lot of guys that can go up there and bounce it off the fence, have their right-rear off the wall and pick up some speed. I’m just not one of those guys that can make it work. I’m more of a finesse-type of guy. I like to put the car in the middle-bottom area.”

With a 40-lap distance, the rest of the field behind Tucker had plenty of chances to make up the ground. Houser, of Ocala, FL, applied the pressure all race long from two grooves higher than Tucker, scraping his car right off the wall each lap, but could not reel the leader in. He made one final scramble for the lead on the final lap in Turns 3-4, rim-riding the cushion in search of a quick burst of speed, but came up just one spot short.

“I thought I was going to get [Tucker]; With about five-to-go, I threw everything out the window,” Houser said of his last-lap mentality. “Just started entering on the fence and threw it wide-open. I was closing in on it, just ran out of laps on that one.”

Two lanes to choose from on Charlotte’s dirt surface made for some spectacular inside-outside racing, and Houser chose the more grueling of the two, in search of the momentum to carry him through the turns.

“It was really, really crazy up there,” Houser said. “I wasn’t going to go down there and run the bottom; I’m not one to get down there and run by the yuke tires, so I went up [high] and scraped every bit of paint that was on that wall off.”

Rounding out the podium was inaugural Tour Feature winner Evan Seay. Largely a top-five car for most the race, Seay, of Chesnee, SC, said the stipulation of the fixed car setup makes it challenging to overcome large deficits, and thus he was unable to catch the leaders in the end.

“Kendal, [Dylan] Houser, these guys are all Pro [iRacing license] guys, they’re fast and they don’t make a whole lot of mistakes,” Seay said. “It’s just very difficult to make that much ground up, even though it wasn’t a whole lot. But I’m still happy with third-place; did better than I thought I was going to do.”

The DIRTcar eSports Tour action continues next Wednesday night, Dec. 16, when the Super DIRTcar Series Big-Block Modifieds make their long-awaited debut on the Tour schedule at Weedsport Speedway. Catch all the action live on DIRTVision, or sign up to compete at DIRTcar.com/eSports.

LAKELAND, FL – He may have been beat by Yost & Co. last week, but Tyler Jackson was not going to be denied in week #2.

Jackson, of Rockford, IL, hung tough in Wednesday night’s Chevy Performance Street Stock League Feature, going 30 long laps around the virtual 3/4-mile of USA International Speedway. A plethora of caution flags scattered throughout the race made it seem marathon-like, but the race was completed under green in the waning seconds of the time limit.

Numerous restarts were required of Jackson to pick up the checkers, and not a single one of them was easy, as previous Feature winner Richie Yost was all over his rear bumper for the duration of the race.

“These restarts here with these long straightaways, they’re tough,” Jackson told League announcer Chase Raudman on the DIRTVision broadcast. “You almost have to do a bit of mirror driving here with the run they can get off the top [groove] on you.”

Despite the challenges in his rearview, Jackson found a way to keep composed, leading every lap for the $100 victory – the first of his DIRTcar eSports career.

Last week’s winner at Lanier, Richie Yost, of Griffith, IN, put pressure on Jackson the entire distance but could not find a way to make a move for the lead. He gave it everything he had in the final laps and was still satisfied with a runner-up finish.

Grant Parr, a newcomer to DIRTcar eSports, brought it home in third to wrap-up a very solid League debut. Coming from seventh on the starting grid, Parr battled it out with Richie Yost’s brother Zane for much of the race and came out on top for a $50 prize check.

“On one of the restarts, I got shuffled up high and was able to make it work, came up through the field and ended up with a solid top-three,” Parr said.

The Chevy Performance Street Stock League action continues next Wednesday night, Dec. 16, from the Limaland Motorsports Park – don’t miss a moment of the action LIVE on DIRTVision! Head to DIRTcar.com/eSports to register for an event today.