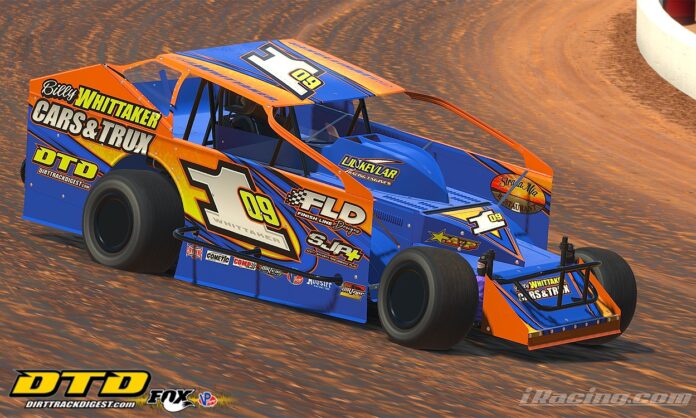 The event will be streamed LIVE on the Dirt Track Digest Facebook page via Dirt Track Digest TV with announcer Mike Mallett calling the action.  Nearly 60 drivers are set to go for gold in the first round of the series at the virtual Volusia Speedway Park. If Shane Andrews doesn’t make the main-event, he’ll join Mallett on the call of the action.

Several of the biggest names in racing are joined by a strong group of iRacers as they compete in five rounds of racing in the chase for the $300 championship.  With 45 drivers guaranteed, another 10 drivers will gain access to the main-event with a non-broadcast qualifier that kicks off at 7pm.

Wednesday night’s program includes qualifying time trials before three Integra Racing Shocks 15-lap qualifying races with the top eight drivers moving on to the 35-lap feature.  There are no consolation races.  Drivers need to race their way in from the qualifiers.

Dirt Track Digest spoke with several drivers competing in the series to get their thoughts on the Modifieds in iRacing.

Former Eastern States 200 winner Jerry Higbie stated, “Modifieds on iRacing are the closest thing to real you can get in a simulation. I think it is a great training tool for hand eye racing coordination.”

Mike Mahaney, coming off an Albany-Saratoga Speedway championship, has been practicing all week in preparation.

“The best car iRacing has come out with yet,” commented Mahaney. “It’s the most fun you can have in sim racing. It’s as close as it gets thus far, and it will only get better from here.”

Billy VanInwegen, another Orange County regular, has been getting as many laps as he can trying to find speed. Like the rest, he loves the cars.

“I think iRacing has done a great job with the handling and racing aspects of the Modifieds,” stated VanInwegen. “It will be a challenge and fun to see how they race over the next few weeks.

Central Pennsylvania’s Louden Reimert is ready for the challenge. He joins the group with a ton of iRacing experience under his belt. He also feels that the cars are as close to you can get without getting in the car yourself.

“The iRacing big-blocks are super cool for anyone that wants to get a basic outline feel of what their favorite drivers actually go through during a normal race,” mentioned Reimert. “Myself and tons of other real-life drivers are also having a blast figuring these cars out and making setups based on our real-life notes. I’d definitely recommend iRacing and the big-block Modifieds to any fan that wants to experience the thrill of driving a racecar without the cost.”

Up and coming Southern Tire star Leo McGurrin has taken a liking to the Modifieds. The Penn Can and Five Mile Point Speedway regular looks to kick of his race season on iRacing before heading to Thunder Mountain Speedway for next year.

“They did an amazing job with the Modifieds,” said McGurrin. “It’s the best simulated racing game out there.”

Up and coming Sportsman driver Payton Talbot is one of the real racers to watch out for. He’s got some accolades to his credit on iRacing and loves the Modifieds.

“Personally, I think that the big-blocks are really accurate and extremely fun to race at a variety of tracks,” commented Talbot. “I think that they are one of the most technical cars to drive on iRacing in some ways.”

“Putting the Torque in New York!!!” Hytorc of New York is your One Stop Shop for all of your torque tool and industrial bolting needs. They offer sales and rentals of manual, pneumatic, hydraulic and battery powered torque wrenches. Hytorc of New York also offers Bolting Solutions, free training and onsite torque wrench calibration and repair. Visit @HytorcNY on Facebook and Twitter.

Precision Hydraulic and Oil is an owner operated hydraulic shop located in Wrightstown, NJ serving the tri-state area.   Precision specializes in custom made hydraulic lines, made in house, while you wait, with trusted high quality PARKER products.  We take pride in our customer service and the ability to get you back up and running with very little down time.  Our shop is stocked with various fittings and connectors to get you back on your way fast.  Visit them on the web at https://www.precisionhydraulicandoil.com/

Every real driver that competes in the DTD iRacing Series presented by Billy Whittaker Cars and Trux will be entered into a drawing to win a free American Racer Tire after the final event courtesy of Lias Tire and American Racer.