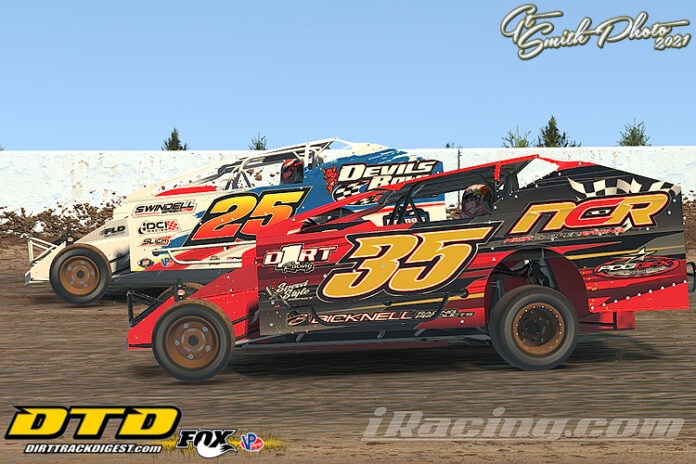 Ducharme captured the first race of the night at the virtual Lernerville Speedway before doubling up and taking top honors at the virtual Weedsport Speedway to sweep the evening festivities allowing him to move to the top of the overall series points with two races remaining.

“I’m pumped man,” said a jubilant Ducharme. “That was a race. That was a brawl.”

Ducharme got a nice jump at the start of the 40-lap race as he opened up a gap on the field on the first lap.  Braden Eyler and Alex Payne began their battle for the second position on the opening lap as well. They were chased by Payton Talbot and Nick Cooper who had their own fight going right behind them.

Talbot found his groove early moving into second in the opening 10 laps with Ducharme setting a torrid pace at the front of the field. Cooper was working over Eyler and Payne before eventually getting into third.

The first caution flag flew on lap 15 as contact sent Alex Payne around in turn four. He was in the midst of a great three-wide battle with Eyler and Cooper before going to the tail after the incident.

Cooper used the restart to challenge for second as he worked over Talbot into turns one and two before completing the pass on the bottom of the speedway a lap later in that same corner.

Cooper then placed his fill attention on the Ducharme No. 25. He ran in his tracks for several laps before being able to pull a slide-job in turns three and four to take the lead on lap 21.

Ducharme was not to be out done, he returned the favor a lap later in turns three and four to regain the lead. Cooper, undeterred, got back by Ducharme on lap 23. The pair swapped the lead several more times before Ducharme finally solidified the lead for the final time on lap 25.

“I saw Nick running the bottom down there on the straights,” commented Ducharme. “He drove around me. He sucked my vinyl off. I knew I had to do something. I changed my line and he slid up off the bottom on the backstretch. I knew I had to drive off into three as hard I could to try and slide him. I was lucky enough to clear him.”

Ducharme and Cooper stayed close at the front while Dale Planck, Talbot and Anthony Perrego were all over each other for the third position. Planck liked the lane on the bottom allowing him to hold onto the spot.

Ducharme kept up the pace in the closing laps allowing him to claim the back-to-back checkered flags as Cooper stayed close, but was unable to pull off the pass to earn the victory.

Cooper, of Waterloo, N.Y., was strong throughout and just missed his second win of the season. Even though he didn’t win, he had a great time swapping the lead with someone he knows well.

“Racing like that with Tyler, I know he races me clean and I’ll race him clean,” said Cooper of Ducharme. “It was just enjoyable to race like that. We both know how we are going to race each other. It was enjoyable. I’ll gladly finish second to that.”

Planck ended up holding off all comers for third at the finish. Talbot scored a solid fourth place finish with Quinn Wallis wrapping up the top five.

Ducharme captured the Matt Becker fast time award for the second race in a row with Integra Shocks and Springs qualifying wins going to Ducharme, Payne and Eyler.

The Dirt Track Digest ISCA Modified iRacing Series Presented by Billy Whittaker Cars and Trux returns to action next Wednesday night at 8:30pm from the virtual Williams Grove Speedway for round four. The event will be live on the DTD Facebook page and free with an account on Dirt Track Digest TV.