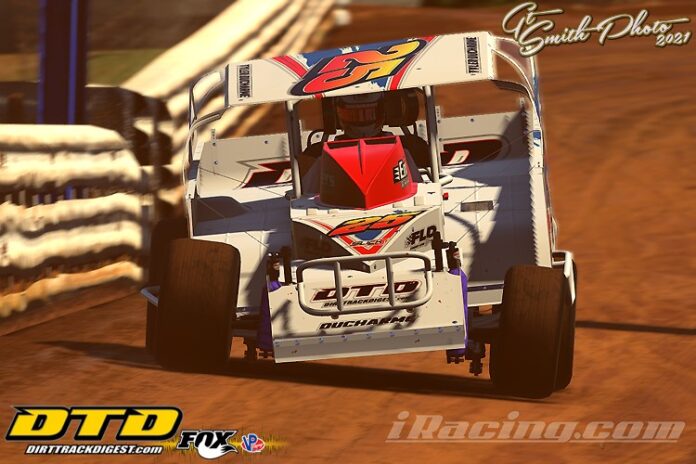 “Hopefully we can keep it up, I really want to win the championship,” said Ducharme.  “One race left.  Now we got a little bit of a gap in the points so I can go into next week and go for it.  I got a little bit of a cushion, so if I do finish second or third, I don’t have to worry about it like I would if I didn’t win this race tonight.  We can go out there, relax and have fun.”

At the start Ducharme was on the hot seat immediately feeling pressure from second starting Bryce Bailey and third starting Cooper.  Ducharme ran just about every lane on the tricky track to keep himself in front of both drivers in the opening go round.

Ducharme maintained the lead by settling on the high-line while Bailey ran the middle with Cooper making a go of it on the bottom of the speedway.

On lap nine, Ducharme decided to try the inside lane allowing Bailey to get a run on him.  Bailey pulled even entering the third corner, but Ducharme was able to slide up in front of him as they exited turn four to keep his No. 25 at the front of the field.

Caution was required on lap 15 for the first time as a car spun in turns three and four.  The field was bunched once more with Cooper now lining up alongside Ducharme.

Ducharme remained the leader on the restart with Cooper keeping Bailey behind him to stay second.  Glenn Reinhart applied pressure to Bailey at this point looking for the third position.

As the laps ticked away, the top three remained unchanged with Cooper hanging with Ducharme.  It stayed that way until another caution came on lap 23 when Ryan Dolbear and AJ Albreada got tangled up in turn three.

As the race reached the final handful of laps, Cooper took several looks to the bottom of the speedway in turns three and four.  He kept up the pressure on Ducharme forcing him to continue to hit is marks and not make a mistake.

With five laps to go another caution brought another restart.  Cooper had his eyes set on the lead as the race went back to green.  Ducharme drifted up the hill in turns one and two opening up the door for Cooper.

Cooper got alongside and nearly got the lead as they worked the backstretch.  Ducharme regrouped and barley held on to the spot in turns three and four.

“There was one restart where I went off in the corner trying to run the top and hit the wall,” said Ducharme.  “I saw the 35 (Cooper) drive around me and I held my foot right to the floorboard.  I wasn’t losing this race after leading all those laps.”

Cooper stayed close in the closing laps, but he was unable to make a run in the last handful of circuits to steal the win from Ducharme.

Cooper’s second place finish didn’t come without a fight.  He gave Ducharme all he could handle and nearly more to finish second for the third second time this season behind Ducharme.  He tried nearly every line on the speedway in pursuit of the victory.

Bailey struggled to keep pace with the top two, but he was still good enough to keep everyone else behind him to earn the final podium spot.

“We were pretty fast at the beginning of the race when we could run it on the top and drive it off the bottom, once that went away I was a sitting duck,” stated Bailey.  “I was trying to hold on to get what we could get.  I don’t think we even had a third place car at the end.  The yellows fell pretty good when I was getting pressured for third.”

Zach Passen was solid again on the night finishing in the fourth position with Anthony Perrego having another strong run to pick up the Short Track Super Series bonus as the highest finishing invited driver courtesy of his fifth place run.

Ducharme captured the Matt Becker fast time-award for the fourth race in a row with Integra Shocks and Springs qualifying wins going to Ducharme, Bailey and Cooper.

The Dirt Track Digest ISCA Modified iRacing Series Presented by Billy Whittaker Cars and Trux returns to action next Wednesday night at 8:30pm from the virtual Dirt Track at Charlotte for the final round. The event will be live on the DTD Facebook page and free with an account on Dirt Track Digest TV.