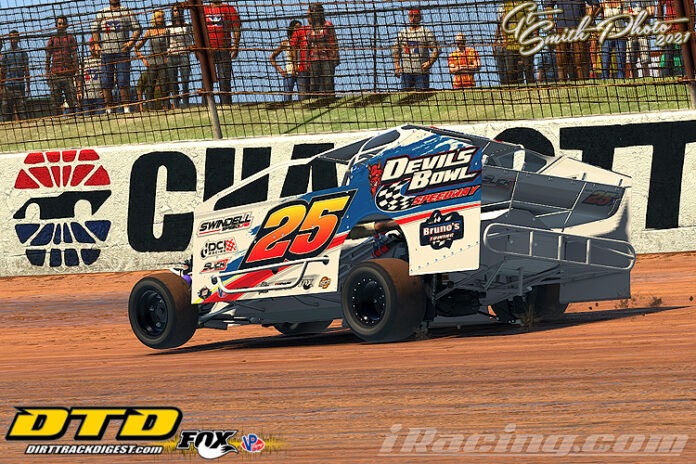 BREWERTON, NY – Tyler Ducharme put the exclamation point on season one of the Dirt Track Digest ISCA iRacing Series presented by Billy Whittaker Cars & Trux with another impressive performance.  The Vermont driver won his fourth consecutive race and the championship with the series on Wednesday night at the virtual Dirt Track at Charlotte.

Ducharme was untouchable all night long, just as has been the case since the opening round.  He was the Matt Becker sponsored fast-time award, drove away in his Integra Racing Shocks and Springs before holding on to lead all 40-laps of the main-event.  Just like the previous three events, he beat Nick Cooper to the checkers.

“It’s awesome to win and be a champion,” commented Ducharme.  “I work really hard at this.  It’s a lot of fun to come out and race against these guys, especially Nick.  Nick put up a good fight all year.  If I made one mistake and got into the fence, I knew he’d have it.  He made me work for it.”

Ducharme started on the point and blasted to the lead at the green with Nick Cooper following him on the bottom lane to quickly take second after starting third.

The top two were strong early as the fifth starting Quentin Young worked his way forward on the bottom of the speedway to try and join them at the front.  He got by Braden Eyler on lap six then challenged Glenn Reinhart for the third spot for several laps before securing it on lap eight.

Young went after Cooper at that point staying to his inside for several laps with Cooper proving to be too strong in the outside lane.  Eventually, Young was forced to give up his challenges as he moved up to the top of the race track on lap 15.

With Young making moves on the inside, Ducharme took a lap on the bottom at this point to try and see what was down there.  That allowed Cooper to close the gap on him.  Ducharme quickly moved back to the top as the race reached lap 20.

The halfway point was attained with Ducharme, Cooper and Young running away from the rest of the field.  Eyler and Reinhart were still stuck together working over one another as they each tried to solidify themselves in fourth.

The first caution came deep into the main on lap 30 as Matt Yorker spun in turns three and four after contact from Quinn Wallis.  This bunched up the field behind Ducharme and Cooper.

Just as he did on the original start, Ducharme jumped out front with Cooper in tow.  The two checked on the rest of the field before one final caution came out with two laps to go.  This set up a green-white-checkered finish.

Cooper timed the restart perfectly hanging with Ducharme at the green.  He followed Ducharme through turns one and two before setting up Ducharme going into turn three.  He attempted to throw the slide job on him, to no avail, as he couldn’t clear Ducharme’s No. 25.

“Nick was really fast,” stated Ducharme.  “Running my middle line there in one and two was working for a while.  I figured when he started catching me, he was running the top.  I wasn’t going to lose the race by not going up there and ripping it.  I tried to be conservative and turn off on exit to try and carry as much momentum in three and slide myself so he couldn’t do it.  Nick was definitely fast.  I think he was a little faster than me at the end.”

Ducharme got his fourth win of the season while Cooper finished second behind him for the third race in a row.  He went for it on the restart, but couldn’t complete the slider.  The run gave Cooper five podium finishes in five events.

“I probably should have waited one more lap, but it’s so hard to pass when the track is like this,” said Cooper.  “Congrats to Tyler, he ran a heck of a race.  It just wasn’t enough.  I knew when I made that move it was going to kill my momentum for the next lap.  I was done for sure.”

Young held on for his best of the series in bringing the Hytorc of NY car home in the third position.  Young acknowledge he took advantage of the moisture on the bottom of the speedway early before moving to the top once it started to slick off.

“I started on the bottom and I knew once the track got up top it was going to be one lane up there,” mentioned Young.  “I was trying to roll bottom and just pass cars before it got too slick down there and lined up on top.”

The Integra Shocks and Springs Qualifiers were won by Ducharme, Reinhart and Cooper.

The Dirt Track Digest ISCA Modified iRacing Series Presented by Billy Whittaker Cars and Trux has concluded its initial season.  Stay tuned to Dirt Track Digest for future announcements about our next iRacing events.  As always, the events will be live on the DTD Facebook page and free with an account on Dirt Track Digest TV.

The Dirt Track Digest TV crew now looks ahead to the Short Track Super Series next week for the Sunshine Swing live from the Bubba Raceway Park.  Events kick-off with a free broadcast on Tuesday, January 26 for practice night before four consecutive nights of action live on Dirt Track Digest TV.