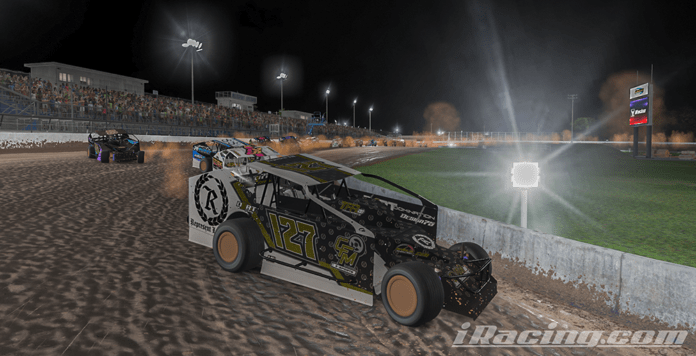 Blake Matjoulis got his goal of competing for a DIRTcar eSports Tour championship started off right with a win in the season opener Wednesday night on DIRTVision.

“We got a couple wins last season, and to start off like this, it’s definitely some good momentum for Week #2,” Matjoulis said.

A 50-lap contest stood before the Bicknell Racing Products Big Block Modified field of 38 strong at Weedsport Speedway. Matjoulis, of Ashville, NY, had yet to win with the Big Blocks on the DIRTcar eSports Tour, but looked as good as ever, backed by his newest iRacing team at 127 Industries.

Starting fourth on the grid, Matjoulis chased down early leader Tyler Ducharme, of Bomoseen, VT, in the opening laps with fellow frontrunners Alex Bergeron, Evan Seay and Dylan Yeager. Matjoulis found his first opportunity at the lead directly after a restart on Lap 18, where he rode the high side of the slicked-off track surface and gained enough speed out of Turn 4 to nip Ducharme at the line for the lead.

“I found something in [Turns] 1-2 that was about a tenth faster every lap and was pounding the fence in 3-4. That’s how I ended up getting the lead,” Matjoulis said.

That move proved to be all the #127 needed to get the lead. But, holding it was a different story. While the top side got him the lead, the bottom carried him to victory. Matjoulis quickly swapped lanes to the bottom in an effort to hold off Ducharme and wisely held the line through the remainder of the race.

Bergeron, of Drummondville, QC, was riding solidly in third with just under 15 circuits remaining when a bit of contact with his competition sent him in a near-spin through Turns 3-4, losing several spots. He impressively rebounded before the checkers, though, climbing back up to a fifth-place finish.

This incident inadvertently allowed the resurgence of Yeager and his charge back up to third, which he completed on the final lap.

“Alex [Bergeron] and Tyler [Schell] got together and I was able to capitalize on that and finally get around Richard [Murtaugh] for third-place, so we’ll take it,” Yeager said.

Back out front, the caution-sprinkled race allowed those behind Matjoulis multiple chances to make a move for the lead, but he was too good in the slick. The 2019 World of Outlaws Morton Buildings Late Model iRacing World Champion got a great final restart after the final caution in the closing laps and drove off to his third career victory with the Tour and the $250 check.

Ducharme was able to hang on for a runner-up finish, the best of his few DIRTcar eSports Tour starts since his debut last season.

“Congrats to Blake, he ran a great race,” Ducharme said. “Once he got in front of me, I got back under him a couple of times. I’m not going to driver through him for a win, I wouldn’t do that to anybody.”

The DIRTcar eSports Tour next heads to the high, dirt-covered banks of Bristol Motor Speedway next Wednesday night, March 31, for a UMP Modified showdown in race #2 of 10. Catch all the action live on DIRTVision!

One of the most difficult lines to take around a glass-smooth Knoxville Raceway in a DIRTcar Street Stock on iRacing is right around the bottom. Fittingly, it was the very line Jordan Gage took en route to his first career DIRTcar eSports Chevy Performance Street Stock League Feature win Wednesday night on DIRTVision.

“I usually run the slider line here, but it was kind of wearing out faster than I liked,” Gage said. “These [races] are awesome when they come onto the table, especially when you can run them.”

Starting P1, Gage, of Whiting, IA, jumped out to the early lead and began fending off a hungry field of 23 other competitors behind him. Applying the most pressure early on was none other than the winningest driver in League history, Tyler Jackson.

Jackson, from Rockford, IL, started fifth and tried both the high and low lines to make the move on Gage, but was unsuccessful. After a late-race caution that brought a green-white-checkered finish at 22 laps, Thorne Zimmerman, of Sanderson, FL, was continuing his charge up from the seventh starting spot and got a great restart as the field came to two-to-go.

Zimmerman took the low line right behind Gage while Jackson followed suit, fending off a high-flying Carl Kilgore to his outside. The field rounded Turns 1-2, breeding a big run for Zimmerman down the backstretch. He tried the middle of the track in the final turns but came up just one spot short in the end.

“That white flag – I tried going in a little higher, so that maybe I could swing it under him, but I think [Gage] saw it coming and blocked the bottom to me,” Zimmerman said.

Jackson, a three-time winner in Season 2, crossed the line in third, continuing his stretch of success in the League that he began last December.

“Kinda got locked down there on the bottom at the end, but all-in-all for 12 green-flag laps, I guess we did all we could,” Jackson said.

The Chevy Performance Street Stocks are back in action next Wednesday night, March 31, at Limaland Motorsports Park for Round #2 of 10 in DIRTcar eSports Season 3. Catch all the action live on DIRTVision presented by Drydene!