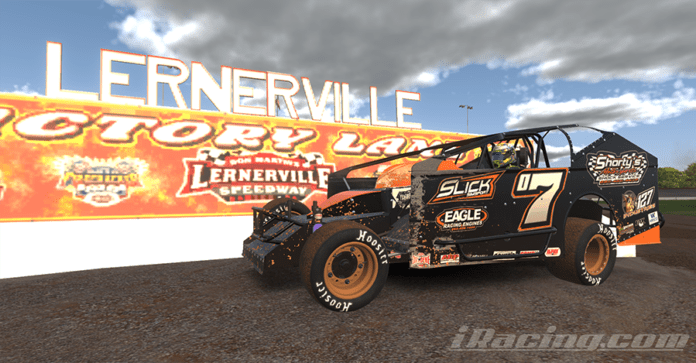 Until Wednesday night, he hadn’t made a start with the DIRTcar eSports Tour since the final race of Season 2 in January. Turns out, Hayden Cardwell didn’t even need it to take down an entire field of iRacing’s best with the Big Block Modifieds.

Coming from eighth on the starting grid, Cardwell advanced his #07 seven positions in the first 15 laps around Lernerville Speedway to get his first taste at the lead, using the very bottom lane and sneaking underneath his opponents to get the spots.

“There was a lot of grip on the bottom early on,” Cardwell told Chase Raudman in the DIRTVision post-race interview. “If you could get down there and shoot off [Turns] 1 and 2, it was so much better than the top.”


Cardwell, the defending World of Outlaws Morton Buildings Late Model iRacing World Champion from Knoxville, TN, made the pass for the lead on the Tour’s own defending champion Kendal Tucker with his left-side tires touching the grass as he slid through the corners.

“I got to second and then the bottom started to go away in [Turns] 3 and 4,” Cardwell said. “Kendal moved up, so I just tried to stay down there. By the time I got to the lead, the bottom was about gone, but all it took was him to get off the bottom in 3 and 4.”

Once Cardwell got to the lead, it was game over. He was followed in hot pursuit by Tucker, of Mt. Airy, NC, and Blake Matjoulis for the last several laps, which included a green-white-checkered restart. But in the end, they were unable to get close enough to try and make a pass, leaving Cardwell with the win and the $250 top prize after 50 laps with the Big Blocks presented by Hoosier Racing Tire.

“I kinda surprised myself because I haven’t really been in competition on here, probably since the [iRacing] Pro Series in Sprint Cars. It feels good to come out here after not being on here in a while and come out on top,” he said.

Tucker brought home yet another runner-up spot in only his fourth week of action on the Tour. With three second-place finishes and one win, he now has the points lead heading into one of the most unique car-track combos of the season next Tuesday: Dirt Midgets at Lanier National Speedway.

Matjoulis, the 127 Industries captain from Ashville, NY, followed-up his third-place run last week with another in Week 5. A solid climb from sixth on the starting grid saw him use the top side to his advantage as he finally reached the podium with less than 10 laps left on the board. The finish will bode well for him in the points standings as he chases his first Tour trophy.

Check out the entire race broadcast livestream for FREE on DIRTVision presented by Drydene or on the DIRTcar Facebook page at 7:50pm ET.

After their unfortunate falling out in last week’s showing at Fairbury Speedway, Carl Kilgore and Keith Hackney have reunited as teammates on a new team and worked their magic Wednesday night at Cedar Lake Speedway to get Kilgore his second Chevy Performance Street Stock League Feature win of the season.

“We’re feeling good, especially after what happened last week,” Kilgore told Chase Raudman in the DIRTVision post-race interview. “Glad to be back on teams with Hackney – he’s a good dude. We had some trouble last week, but without all of our teammates and us being together, I can’t do this right here.”

Hackney, of Calhoun, GA, was penalized to the tail of the lead lap after the checkered in last week’s Feature due to contact with Kilgore wile racing for the lead on the final lap. Kilgore spun and was left with a 16th-place result, Hackney in 21st, while Tyler Jackson ran off with the win and a nice lead in the point standings.

But that’s all behind them now. The two put their differences aside over the week and straight-up dominated Wednesday night, starting on the front row after back-to-back Heat Race wins.

At the drop of the green, Kilgore, of Greenville, MS, immediately took off and never looked back, leading all 25 laps en route to his $100 victory.

“We’ve got a little bit of a gap to make up, but I feel like as long as we keep doing what we’re doing, we’ll be there,” Kilgore said.

Hackey did a solid job for his teammate in fending off the pressure from the rest of the field behind him, crossing the stripe in second for another good points race.

While he was able to nurse the hurt car home to a third-place finish, Jackson, of Rockford, IL, almost found himself in deep trouble about halfway through the race.

A slower car had gone over the outside wall in Turns 1-2 and proceeded to re-enter the track right in front of the leaders under green, causing a multi-car crash down the backstretch that tagged Jackson. He was able to drive out of the situation with control, but the damage had already been done to his right-front wheel well.

With the right-front pushed in, Jackson switched to the high line for the remainder of the race and fought back to a third-place result, likely saving his points lead.