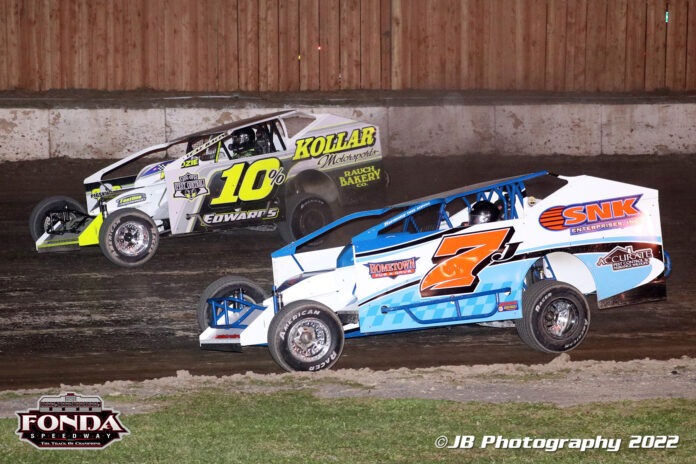 FAIR HAVEN, VT – Overall Points Update: Business is picking up in a big way with the Fastline Performance King Of Dirt Racing Overall Points. While some tracks are still too open, it didn’t stop Chad Edwards, Ryan Simmons, and Scott Duell from leaping to the top of the scoreboard tying Joe Toth for the top spot in the standings after this weekend’s racing action.

It’s early in the season, so it can’t be stressed enough that if a driver hasn’t had a chance to race yet they are not behind in points. Currently the points show each registered driver’s best single race finish until all registered competitors have raced once. Then standings will reflect best two races eventually progressing to each drivers best 12 finishes for the season.

Each week we feature the top three KOD competitors from the weekend during the points update. Chad Edwards being the most recent driver to earn the spotlight. He won the season opener Sunday night at Fonda Speedway with the Kollar Motorsports – Bug Off Pest Control number 10% Bicknell. This is his second scored KOD win to his credit.

Our third and final featured driver of the week is the high side hustler himself, Scott Duell. After a miserable first week this former KOD feature winner went to work and scored a victory at Albany-Saratoga on Friday night. This would be Duell’s second scored KOD win to his credit driving his Benson’s Pet Center – Bisson Excavating number 14X Bicknell.

OVERALL KOD NOTES: Registrations continue to roll in giving race fans new names added to the standings. Registration is open until June 1st for any driver wishing to compete for the Overall or Limited championships. Matt Ellery from Bridgeport is on the board with a 2nd place finish, Gary Smith from Five Mile Point is on the board with a 15th place finish, and brothers Mark and Brett Mortensen are on the board with 7th and 21st place finishes. Pro Stock drivers Chris Murray and Zach Sorrentino will throw down for the Overall crown from Albany-Saratoga and Lebanon Valley Speedways. Both posted finishes this weekend during racing action with Murray 12th and Sorrentino 7th.