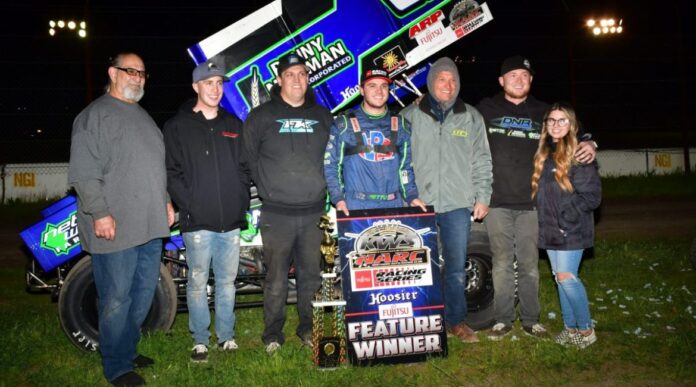 Netto, piloting the potent Netto Ag/Penny Newman Grain KPC, started on the pole after winning the Sunnyvalley Bacon dash and quickly jumped to a straightaway lead over Dominic Scelzi, Mitchell Faccinto and Rico Abreu. Netto encountered lap traffic five laps into the event but had absolutely no problems motoring in and out of slower cars. By lap 12, he had already built up a four-lapped car interference, only to lose the advantage when the first of three caution flags appeared a circuit later for a stopped car.

On the restart, Netto quickly motored to the lead as Scelzi fought handling issues caused by a broken front wing and a pressing Abreu. Abreu managed to move into the runner-up spot after a lap 21 restart but gained little ground on the leader until the final caution flag appeared with only three laps remaining. However, at that point, Netto had no peer and cruised to a .846 second victory.

Abreu, who set the standard for the 23-car field in ARP qualifying, scored second aboard the Works Limited/Lucas Oil #57 sprint car. Scelzi held on to a solid third in the Scelzi Enterprises Maxim. Seventh started Shane Golobic was fourth, chased by Iowa driver Austin McCarl.

Netto credited his fourth career series to victory to his family and Drew Warner. It ended a NARC King of the West winless streak dating back to June 24th, 2017 at Calistoga Speedway.

“Drew gave me a car that I could run anywhere I wanted,” said Netto. “Lapped traffic wasn’t an issue and I did my job to get us here.”

Heat races were picked off by Golobic, Faccinto, and Becker.