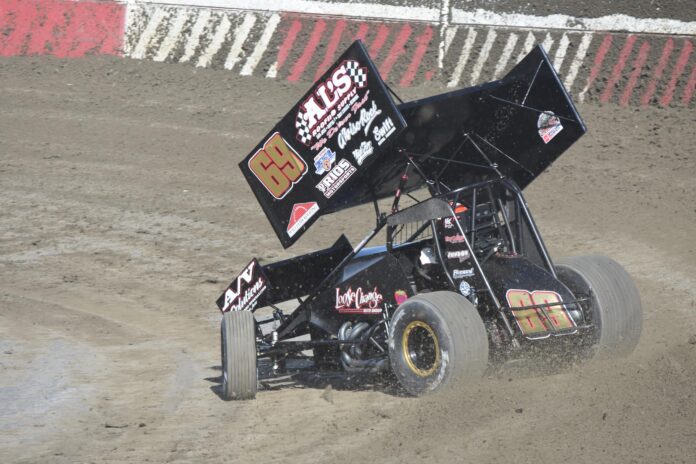 SACRAMENTO, CA – The NARC King of the West Fujitsu Sprint Cars storm into the second quarter of the 2021 campaign this Saturday, July 10th by making their second trip to Petaluma Speedway of the year for the Salute to Baylands Raceway Park.

Saturday’s event salutes the legendary speedway that was located in Fremont and featured some of the west coast’s best racing action of the 1980’s. Former promoter of Baylands, David Vodden, will be lending some insight from the booth this weekend. Petaluma will also be hosting an autograph session Saturday featuring some of the top talent to have competed at Baylands.

The NARC-KWS 410-winged sprint cars will be joined by wingless sprint cars, super stocks and dwarf cars for what promises to be an exciting evening of action. The hooked-up clay of Petaluma routinely produces intense racing with plenty of hold your breath moments, especially once lap traffic comes into play.

Heading into Saturday show, Bud Kaeding has utilized a stretch of four consecutive top-5 finishes to take over the points lead. The 2017 champ has been banging on the door of a King of the West win in 2021 with 29 laps led across two different feature events, and he would love for Saturday to bring that victory.

“Obviously winning is why we’re all out there,” Kaeding said. “Getting into position to win some of those races has been a good step for us the last couple weeks. To get this number sixty-nine car back in victory lane is something we’re all inching toward and can’t wait to make happen. We’ve been getting closer every week and been in position to win a good share of the last three races.”

The numbers say Kaeding has a great chance to win at Petaluma and extend his margin atop the standings. In his last nine series starts at the 3/8ths mile oval, the Campbell native has six podium finishes, including a runner-up back on May 22nd of this year.

“We’ve had good cars there, regardless of whom I’ve been driving for,” Kaeding said of his success at Petaluma. “It’s a fun place. It’s really fun when you start up on the front couple rows. The back couple rows can be scary.”

Winner of the most recent series race at Petaluma, Justin Sanders, will be a top competitor on Saturday. He aims to rebound after misfortune at both Ocean Speedway and Placerville last month ended potential top-5 runs. The win for Sanders in May marked his second victory on the tacky clay since partnering with Larry Antaya Motorsports, and he hopes to make it a trio of triumphs to help make up some points this weekend.

Reigning series champ, DJ Netto, should be toward the front as he looks to swipe the point lead back. He’s one of only two drivers to finish in the top-10 in all five events of 2021 and hasn’t finished worse than 7th in his last eight series races at Petaluma.

Perhaps a dark horse candidate to keep an eye on for the win is Benicia’s Billy Aton. His last four series starts at Petaluma have all been top-10 runs with a career best second place finish in July of 2019. Aton has proven his No. 26 machine has speed this year as he leads the Swift Metal Finishing Most Feature Cars Passed category. If “Wild Bill” can set himself up with a strong qualifying effort, he’ll have a good shot at parking it in NARC victory lane for the first time in his career.

The names above are just a few who will be on hand Saturday. Some other drivers expected to be in the pits are newly crowned Dirt Cup champion Dominic Scelzi, Iowa’s Austin McCarl, Tim Kaeding, Sean Becker, Sean Watts, Kyle Offill and more.

The Salute to Baylands Raceway Park can also be viewed live on floracing.com along with the entire NARC King of the West Fujitsu Sprint Cars schedule.