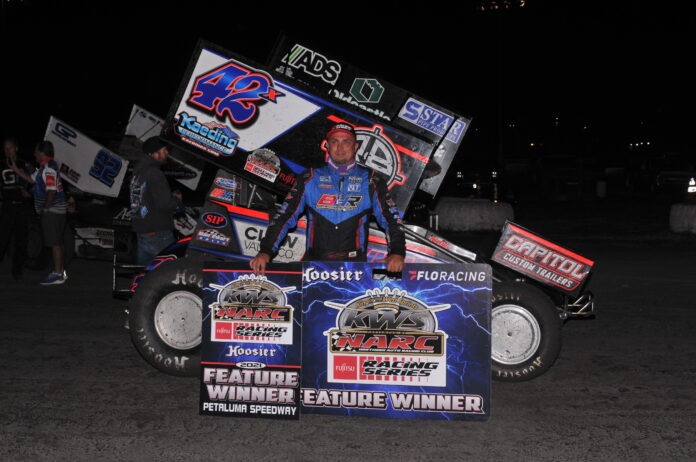 Kaeding started fifth in the grid aboard the Bates-Hamilton ABC Companies-sponsored Maxim and passed Bud Kaeding on a lap 19 restart to take a lead that he would never surrender. It was the 70th series victory of his career, second on the all-time list.

Bud Kaeding set the standard for the first 11 laps until the caution flag came out for a Sean Becker. On the restart, 15-year old Joel Myers Jr. and defending champion and ARP fast qualifier DJ Netto both powered past the leader in the first corner to pace the field. The two appeared to be in a class of their own and began to distance themselves from the field when disaster struck on lap 18 in lap traffic. Myers got tangled with a slower car in the fourth turn and Netto, with no place to go, got reeled into the fracas also. Myers was done for the night and Netto had to restart at the back of the pack.

On the ensuing restart, it was the battle of the Kaeding’s as they drag raced into the first turn. Tim Kaeding rode the highline on the Petaluma gumbo and catapulted into the lead motoring out of the second turn. At that point, he was off to the races posting some of the fastest lap times of the night.

Sixth starter Andy Forsberg was on the move in his A&A Stepping Stone sprinter during the final laps and passed Bud Kaeding for the second spot with only two laps remaining. He finished five car lengths behind the winner. B. Kaeding held on for third in the Al’s Roofing Supply Maxim. Dominic Scelzi and Justin Sanders rounded out the top five.


“It’s always great racing against my brother,” said TK in victory lane. “It usually a 50-50 deal on who is going to come out on top, but tonight, we had the best race car and he was a little tight.”