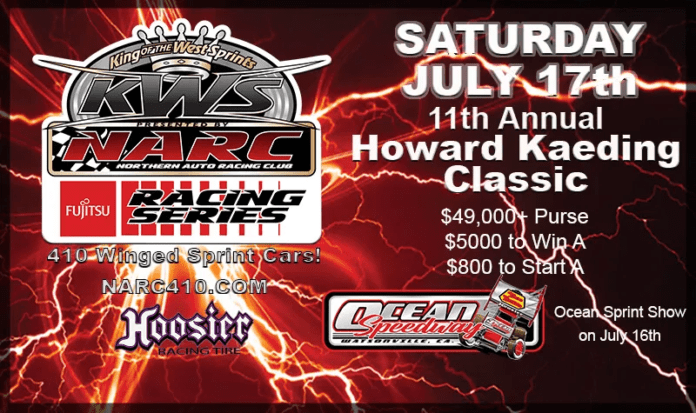 SACRAMENTO, CA – Another prestigious event is on tap for the NARC King of the West Fujitsu Sprint Cars as this Saturday, July 17th brings the 11th annual Howard Kaeding Classic at Watsonville’s Ocean Speedway. The event is presented by Al’s Roofing Supply and “The Hogs”, one of the most successful pit crews in NARC’s history.

The event celebrates the patriarch of the familiar Kaeding family, Howard. Along with earning a vast collection of trophies himself, his lineage is responsible for claiming countless checkered flags across California courtesy of his son, Brent, and grandchildren, Tim and Bud.

The Howard Kaeding Classic also serves as a fundraiser for the NARC Benevolent Fund, the non-profit that provides help to injured competitors and their families.

The two-night show kicks off Friday, July 16th headlined by the Taco Bravo 360 Sprint Cars. On Saturday the NARC-KWS 410 Sprint Cars will be joined by IMCA Modifieds, Hobby Stocks and the Police-n-Pursuit. The lucrative Fujitsu Feature on Saturday will award $5,000 to the winner and pay a stout $800 to start.

After Friday’s race, there will be a pizza and beer party hosted by the Kaeding’s at the Santa Cruz County Fairgrounds. Before the action on Saturday night, the Howard Kaeding BBQ Luncheon will take place at 1:00 P.M. also on the fairgrounds. Both will serve great food and an even better atmosphere. A $20 donation to the NARC Benevolent Fund is required for entry to each.


Ocean Speedway should provide some close-quarters racing action Saturday night. The NARC-KWS visit to the bullring last month produced one of the most intense races of the year so far with three different leaders, top competitors making contact and battles all over the track.

The Kaeding brothers shouldn’t be doubted as they aim to win the event honoring their grandfather. Bud will be looking to join Kyle Hirst as the only three time winner of the NARC portion of the Howard Kaeding Classic while Tim eyes his first. The duo claimed the top two positions in the most recent series appearance in Watsonville when Tim scored his third Pombo-Sargent Classic after a duel with Bud. Tim carries the momentum of wins in two of the last three series races in 2021 while Bud leads the points and has a streak of five consecutive top-5s heading into the weekend. The event holds a little extra significance for Bud as he spearheads much of the promotional effort.

As always, Justin Sanders will be a favorite at Ocean Speedway this weekend. The Aromas native has already tallied seven feature wins at his home track this year, and two of his seven career NARC victories have taken place at the quarter-mile. He’ll be looking to redeem his misfortune from June’s Pombo-Sargent Classic when a mid-race incident ended a potential podium run.

Shane Golobic is another who is a near lock to be up front. Since 2015, the Fremont native owns a whopping ten series podium results at Watsonville. Despite the success, Golobic is yet to add a Howard Kaeding Classic to his lengthy resumé, and he hopes to change that this weekend.

Fresno’s Dominic Scelzi will look to continue his trend of not only winning in 2021 but collecting victories in high paying events. Out of Scelzi’s thirteen sprint car wins this year, three were the $11,000 Peter Murphy Classic, $7,600 Dave Bradway Jr. Memorial and most recently the $15,000 Dirt Cup. If Scelzi can pull of the win, he’ll join Kyle Hirst as the only driver to win the Peter Murphy Classic, Bradway Memorial and Howard Kaeding Classic in the same year.

Many more talented competitors will be vying for the $5,000 prize this weekend including defending series champ DJ Netto, Sean Becker, Billy Aton, Sean Watts, Kyle Offill and plenty more. The last three Howard Kaeding Classics have had an average car count of 33.

The pit gates will open at noon, and the front gates will open at 3:30 P.M. Qualifying will kickoff at 4:45 P.M. with racing to follow. Adult GA tickets are priced at $30. Juniors ages 11-16 GA tickets are $25, and kids ages 6-10 will be admitted for only $15. Kids 5 and under are free! Tickets can be purchased in advance via the following link: https://www.eventsprout.com/event/kaeding-classic-night-2

The Howard Kaeding Classic can be viewed live on floracing.com along with the entire NARC King of the West Fujitsu Sprint Car schedule.