It had been over a year since a driver had claimed their first series victory prior to Aton, Spencer Bayston being the most recent in June of 2020. Aton also became the sixth driver to earn a series victory this year through nine races.

While the box score will show Aton led from green to checkered, it was by no means a 30-lap walk in the park. The pilot of the Bill Aton Painting No. 26 had to endure a hairy start to the feature and hold off the west coast’s hottest driver, Dominic Scelzi, in the closing laps. Aton admitted to feeling some intense pressure.

“I couldn’t tell if I was rolling at a good pace or if they were on us,” Aton said. “But every time a yellow came out, I was looking at the scoreboard and I thought ‘oh god, they’re coming.’”

The green flag dropped with Aton and fellow front row starter, Bud Kaeding, leading the field into turn one. Aton nailed the start and established a lead out of turn two and down the backstretch. Then in turn three, the entire venue held their collective breath as Wild Bill got a little too wild, getting sideways on the top side in front of the field, leaving Bud Kaeding nowhere to go. By the time the dust settled, Aton had straightened himself out, but Bud Kaeding found himself on his side having been hit by at least five other cars in the melee. Kaeding was uninjured.


Ryan Robinson snuck by the mess to briefly take the lead, but since a lap had not been completed the top spot was returned to Aton for a complete restart following the red flag. A pair of cautions on laps three and four for cars stopping on track slowed the early pace of the race.

The restart with twenty-seven to go brought the first green flag run and saw Tarlton Motorsports pilot Corey Day drive by Robinson for the runner-up spot and quickly close on Aton. Just when it appeared Day might move into the lead, misfortune struck the 15-year old on lap thirteen when two lap cars got together right in front of his No. 21 machine, leaving him with nowhere to go and a second straight DNF.

It didn’t take long for three-time series winner in 2021, Dominic Scelzi, to join the battle for the win following the restart with eighteen to go. The driver of the Scelzi Enterprises/Red Rose Transportation 41 moved past Robinson on lap fourteen and set his sights on the No. 26.

Just when you could throw a blanket over Aton, Scelzi and a fast approaching Tim Kaeding in the battle for the lead, a yellow came out with less than ten to go for a stopped Brooklyn Holland.

The final seven laps produced an intense game of cat and mouse around the lightning fast Santa Maria Raceway. Scelzi stalked his prey, using a unique line in turns one and two to get a massive run down the backstretch each lap. Aton, though, would not be denied as he maintained a steady line and pace and held on to win by just .350 seconds over the point leader.

“Just had to keep running some good lines, and luckily this old girl took her home,” a jubilant Aton said.

While disappointed to miss out on the win, Scelzi and the entire pit area couldn’t help but be happy for Aton.

“If there’s anybody in this pit area you want to see pick up their first win and run second to him, that’s the guy,” Scelzi said.

Rounding out the podium after an incredible comeback was JJ Ringo. After hitting the wall hard while leading his heat race, he and his team thrashed to get the Mike Mitchell Construction/Ernest Hemingway Vineyards/Porter Diving No. 2 back out for the feature, and Ringo drove from twelfth to third to earn his first career series podium and the Swift Metal Finishing Hardcharger.

“Thanks to everyone who busted their butts to help us get out here,” Ringo said. “It’s pretty cool to get my first podium with King of the West.”

(ED NOTE: The Wheelie Contest scheduled at Santa Maria Raceway was cancelled due to poor track conditions. It required a complete track rework which delayed the program by 90-minutes.) 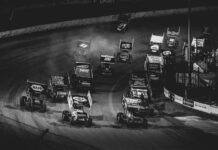 World of Outlaws Begin Homestretch with Stops at Eldora & Lernerville 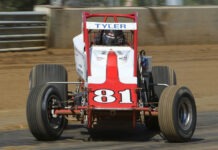 Tyler on Brink of 200th Start Saturday at Eldora