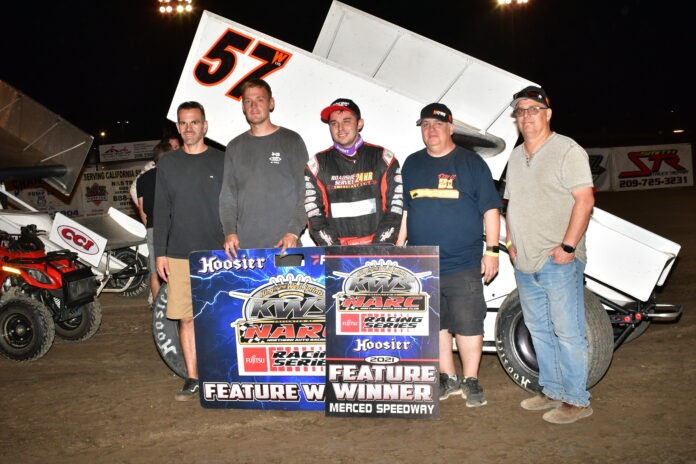 MERCED, CA – Justin Sanders took advantage of some well-timed caution periods to outrun Dominic Scelzi and score Thursday night’s Fastest Four Days in Motorsports opener for the NARC King of the West Fujitsu sprint cars at Merced Speedway. Although the stat sheet will show that Sanders led all 30-laps aboard Kevin Koslowski’s Works Unlimited #57, wrenched by Paul Silva, Sanders had to battle his way through slower cars and an ever pressing Scelzi to score the single-car length victory.

Sanders won the Sunnyvalley Bacon dash and started on pole. He had to fend off 15-year old Corey Day for the first 10 laps, until the Scelzi assumed the runner-up spot in the second corner on lap 12. Scelzi took the lead a lap later, but the field reverted back a lap when the caution came out for fuel leak fire on Jessie Attard’s car. When racing resumed, Scelzi continued to shadow the leaders every move and was challenging for the point when the caution appeared once again on the 18th circuit. This was a recurring theme throughout this feature event.

The race came to a abrupt halt on the 23rd circuit when Day tangled with a slower car while running fourth, flipping violently over the first turn berm. He was shaken in the accident and evaluated by medical crews on the scene. He will miss the next event with the Tarlton Motorsports team.

Once the race resumed, Sanders had his hands full with Scelzi and now sixth starter Colby Copeland. The trio reached lapped traffic with two-laps to go but Sanders ended up holding on for a car length margin of victory worth $4000.

“Let’s face it, I was lucky that some of those yellows came out tonight,” said Sanders. “Dominic was really fast and was all over me when we got in slower traffic. I’ll take a little luck any day. I’m just glad that I could score the win for this team. They gave me a great car and I went out and did my job.”

Rico Abreu set a new track record in qualifying with a lightening quick 10.354 second run around the quarter-mile oval.

It was Sanders second NARC King of the West victory of the season and 10th of his career. It marked the series first trip to Merced Speedway since 1992.