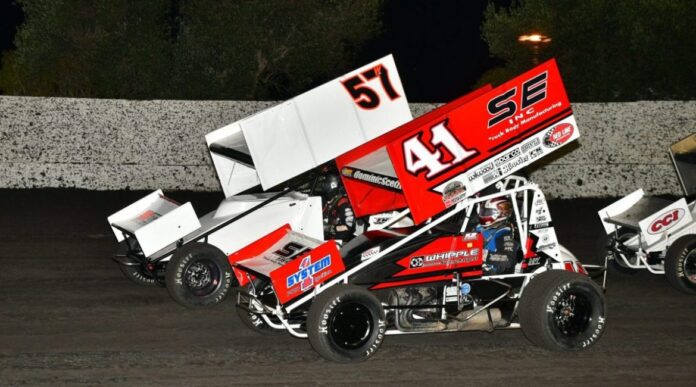 PETALUMA, CA – By leading all 30 laps, Justin Sanders claimed his second win in the last four NARC-King of the West Fujitsu Sprint Car events while Dominic Scelzi finished third to earn the Fastest Four Days in Motorsports title at the historic Petaluma Speedway.

The win is Sanders’ third 30-lap Fujitsu General USA Feature of the year, ninth career, and second aboard the Kevin Kozlowski owned and Paul Silva prepared Works Limited No. 57. On the tacky, quick racing surface, Sanders had to remain focused each and every lap.

“Just trying not to make any mistakes and trying to keep the car underneath me as hard as I could,” Sanders said of what was required to grab the checkered flag.

Rounding out the podium was Dominic Scelzi, marking his sixth straight appearance in the top-three and securing enough points for the $2,000 to win Fastest Four Days in Motorsports championship. The Jimmy Carr-prepared Scelzi Enterprises/Red Rose Transportation No. 41 appears incapable of having an off night even with the grueling challenge presented by the Fastest Four Days in Motorsports.

“This is a very tough four days,” Scelzi said. “You go to four completely different racetracks, and you have to be fast every single night, and the 41 car has been so good to drive every single night this year. It feels great to have that consistency.”


The field was brought to green by Sanders and Scelzi, and Sanders quickly darted to a five car-length advantage. Behind him, Colby Copeland moved around Scelzi into second on lap one aboard the Larry Antaya Motorsports Fire Protection Management 16A.

Copeland began his pursuit of Sanders, who, oddly enough, was attempting to mirror what he did in May in the car Copeland wheeled, lead from green to checkered.

Copeland looked to the inside of Sanders early on in turn three but couldn’t make it work. Then, in typical Petaluma fashion, a game of cat and mouse through lap traffic ensued. Sanders would clear a car, and Copeland was forced to match his moves to have any chance of keeping up.

The two dueled through slower cars, but ultimately Copeland was unable to mount a serious charge for the lead. Every time it seemed like he might reel him in and have an opportunity to make a move, Sanders would put a little more space between the two. When the checkered flag flew, Sanders crossed the line with a cozy 1.039 second advantage.

Despite again dominating by leading every lap on the fast 3/8th mile, Sanders was humble in victory lane.

“I think I put together a decent 30-laps,” Sanders said. “They weren’t great, but they were good enough to get the job done.

Sanders’ efforts earned him a $4,000 payday while Scelzi took home $2,000 for winning the Fastest Four Days in Motorsports title on top of his race earnings. Scelzi also stretched his growing point lead a little more in the overall NARC standings.