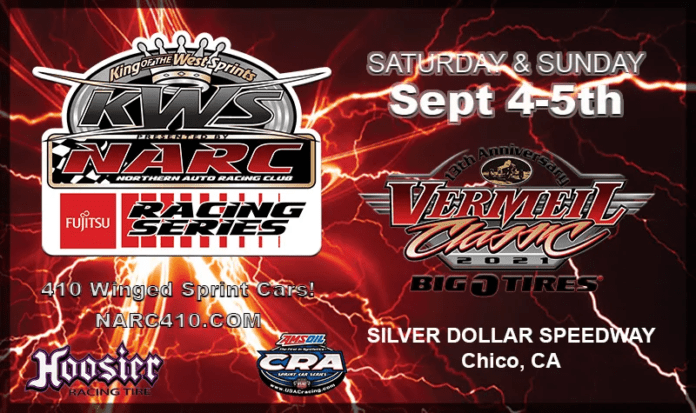 CHICO, CA – The event honoring one of the most important figures in the history of NARC (Northern Auto Racing Club) finds a new home for 2021 at one of California’s most historic bullrings this weekend when the NARC-King of the West Fujitsu Sprint Cars head to Chico’s Silver Dollar Speedway on September 4th and 5th for the 13th annual Louie Vermeil Classic.

Louie Vermeil is a key figure in the birth of NARC. During what has become one of the most significant conversations in the history of west coast racing, Vermeil helped conceptualize the sanctioning body in Calistoga’s Owl Garage in 1960 and shortly after made it a reality with the creation of the Northern Auto Racing Club.

The first edition of the Classic took place at Calistoga in 2008 and has since become a Labor Day Weekend tradition of the wine country half mile. However, a battle of bureaucracy between the track and the Napa Valley town forced the 2021 relocation. The annual Calistoga Hall of Fame Dinner has also made the move to Chico for this year and will take place Friday September 3rd on the Silver Dollar Fairgrounds. Before the racing gets going on Saturday, there will be wine tasting and live music also on the fairgrounds from 1:00 P.M. to 4:00 P.M.

While it’s a new venue for the event, Silver Dollar Speedway is certain to continue the tradition of great racing with drivers hunting one of the sport’s most coveted trophies and a stout payday. Both Saturday and Sunday’s Fujitsu/Big O Tire Feature will award $5,000 to the winner. The two-night show will also feature $5,000 to win USAC/CRA non-winged sprint car events. There is also lap money and product awards up for grabs.

Dominic Scelzi will enter the weekend as the point leader fresh off his Fastest Four Days in Motorsports title. At this point, it seems a Herculean effort will be required to pry him from the podium as he is currently riding a six-race streak of top-3s. Scelzi owns a win in Chico this year and even finished in the top-5 during a 2019 World of Outlaws appearance at the quarter-mile.


Looking to some other potential favorites, Sean Becker or Roseville stands out. The 2005 champ has turned countless laps at Silver Dollar Speedway and tallied 66 sprint car wins at the quarter mile including a World of Outlaws triumph at a Gold Cup prelim night. Becker has continued to gel with Vertullo Motorsports in his first full KWS season since 2014 and already picked up a win in the Howard Kaeding Classic in the yellow No. 83V.

A preview of any 410 sprint car race at Silver Dollar Speedway cannot go without mention of San Jose’s Tim Kaeding. Kaeding owns 58 career sprint car victories in Chico including the most recent series visit in August 2019. TK has finished second in three of his last five starts with the World of Outlaws at Silver Dollar. The pilot of the Bates-Hamilton Racing 42X will be aiming to add a Louie Vermeil NARC-KWS triumph to his accolades.

While Bud Kaeding has spent the bulk of his recent racing career with a wing on, he spent much of the 2000s in the USAC ranks without wings and is expected to have a non-wing ride for the CRA portion in a double-duty effort.

On both Saturday and Sunday at Silver Dollar Speedway, the pit gate will open at 1:00 P.M. The grandstand gate will follow at 4:00 P.M.

Qualifying will kickoff at 5:30 P.M. with racing set for 6:30 P.M. Reserved seats will be $40. General Admission will cost $35. Kids 6-12 will be admitted for just $10. Tickets can be purchased at: https://hmcpromotions.ticketspice.com/louie-vermeil-classic and include a unique FanPass option!

The Louie Vermeil Classic can be viewed live on floracing.com along with the entire NARC-King of the West Fujitsu Sprint Car schedule.