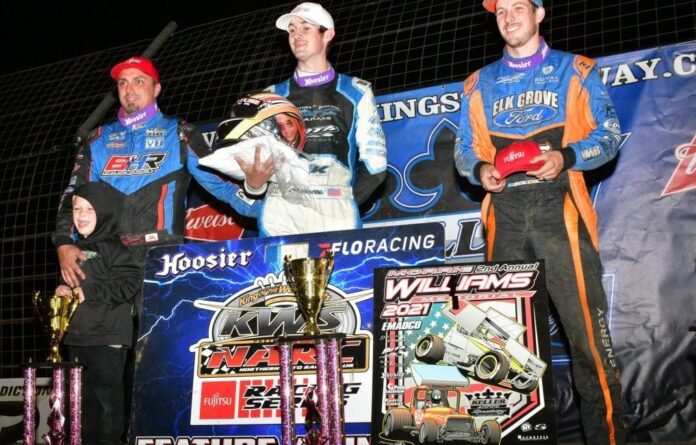 Scelzi started from the pole in the first feature and brought the field to green alongside fellow front row starter Rico Abreu. Before the field could get through the first set of turns, Mitchel Moles spun from his third starting spot in front of the field. Miraculously, everyone missed him.

On the ensuing restart Justin Sanders drove the Works Limited No. 57 by Abreu for second. Sanders stalked Scelzi as the two most winningest sprint car drivers with NARC and in the nation in 2021 navigated slower cars.

Scelzi’s race nearly ended with heartbreak on lap eight when Steven Kent spun right in front of him coming out of turn four. Scelzi jumped to the outside near the wall and managed to squeeze between Kent’s machine and the barrier, just grazing the fence but not harming his Scelzi Enterprises/Red Rose Transportations No. 41.

Racing resumed for a few laps following the yellow for Kent until a stopped Kurt Nelson slowed the action again with nine circuits remaining.

The hometown hero, DJ Netto, jumped into the runner-up spot in his Netto Ag/Penny Newman Gain No. 88N on the restart but wasn’t able to mount serious a charge at Scelzi. The point leader held on to win by a comfortable margin. Netto and Sanders filled out the podium behind the Fresno native.

The victory marked Scelzi’s sixth of the year, a new personal best for a season, and the 15th of his career with KWS. Rico Abreu, Willie Croft, Kyle Hirst, Blake Carrick, Tim Kaeding, Sean Becker and Mitchel Moles completed the top-10.

The front row in the second feature was comprised of Shane Hopkins and Jessie Attard after the invert based on the first feature’s finish was applied.

Attard took command early in search of his first series victory, and Moles, who started 11th, immediately began his charge. Moles began picking cars off on the bottom side of the track and received a little help on lap three when Ryan Bernal and Ryan Robinson were involved in an accident, gifting Moles two more spots in his journey toward the front.

On the restart, Moles got back to work on the bottom, cruising by his competition within the top-five. Another yellow flew on lap five for a spun Rico Abreu. Moles stole the lead on the restart from Attard and quickly built a comfortable advantage.

As the laps dwindled Moles’ greatest threat began to creep toward the front. Using the same bottom line as Moles, Fremont’s Shane Golobic moved his NOS Energy Drink/Elk Grove Ford No. 17W into second on lap seven. When Golobic got to the runner-up spot, Moles held a huge lead of roughly 15 car lengths, but the 12-time NARC feature winner started to slice into the margin.

With five laps to go Golobic had all but erased Moles’ advantage. However, the pilot of the Roth Enterprises No. 83JR showed the poise of a veteran in pursuit of his first series victory, clearing two lapped cars in one corner to give himself enough space to seal the deal.

Moles’ triumphs marked the third time of 2021 a driver has earned their inaugural series victory. Oddly enough, it was also the first time Roth Motorsports visited NARC-KWS victory since the winner of the first feature, Scelzi, took the 83 to the winner’s circle in 2019.

Behind Moles and Golobic, Tim Kaeding rounded out the podium in his R&B Company/Teichert No 42X for his second top-three in his last trio of KWS races at Keller Auto Speedway.

Justin Sanders finished in fifth after starting 20th and was the only driver to earn top-fives in both feature events, collecting him enough points to win the Morrie Williams Memorial points title and the $2,000 that came with it. Scelzi and Moles’ main event wins netted them each $3,200.

Up next for the NARC-King of the West Fujitsu Sprint Cars is a double header weekend set for October 29th and October 30th at Keller Auto Speedway for the Anthony Simone Classic and Kern County Raceway Park.