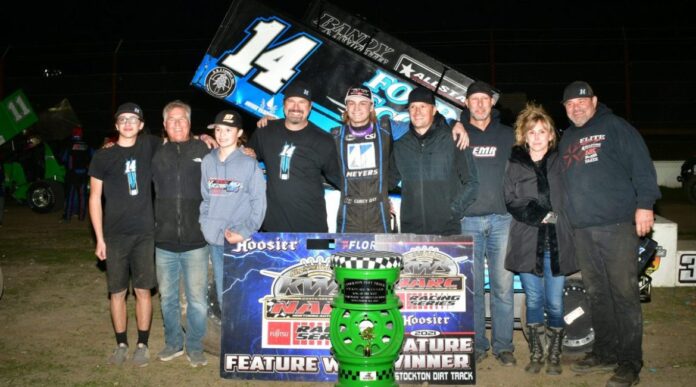 STOCKTON, CA – Nothing could stop Corey Day Saturday night at the 38th Annual Tribute to Gary Patterson hosted by the Stockton Dirt Track.

The 15-year-old led from flag to flag en route to his second career NARC-King of the West Fujitsu Sprint Car victory aboard the Meyers Constructors No. 14.

The victory completed a hot streak to end Day’s season. Some bad luck forced to ascending star to wait until his ninth series start before earning his first top-10, but Day hasn’t missed the top-10 in the four starts since earning his first, including the pair of wins.

Though nothing tops the significance of a first win, the Stockton triumph held an important layer that was absent from Day’s inaugural victory relating to his car’s owner.

“This feels great,” Day said in victory lane. “Jason (Meyers) wasn’t even there for the first one at Hanford, so I’m glad he could be here for this one.”


Courtesy of claiming the Sunnyvalley Bacon Dash, Day led the field to green with the defending series champion, D.J. Netto, to his outside. Netto got the initial jump, but an incident between Rico Abreu and Tim Kaeding before the first lap had been completed that left Kaeding spun in turn two brought the field back together for a complete restart.

Day would not be denied on the restart, darting ahead of Netto and setting sail in the early stages. Back behind the leaders, Tim Kaeding, who was wheeling a Steve Kinser Quaker State No. 11 tribute paint scheme for Bates Hamilton Motorsports, began a furious charge from the tail after his opening lap mishap. Just a few laps after the restart, TK entered the top-10.

The race’s first red flag flew on lap five for Richard Brace Jr. who tipped over in turn three. Brace Jr. was unharmed.

Racing was quickly halted again on the restart for Mitchel Moles who slowed in turn two. The caution flying before another lap was complete necessitated a single file restart with 26 to go.

Again, Day quickly jumped out to a strong advantage when racing resumed as Shane Golobic, Netto and Dominic Scelzi battled for the runner-up spot. Netto slipped off the track on the backstretch, allowing Golobic and Scelzi by, and the trio would settle in that order for a bit.

The green flag run saw Day forced to negotiate slower cars for the first time of the race. Knowing how fast his machine was, the teenager wasn’t concerned navigating lapped traffic. In fact, he knew it would probably play to his advantage.

Slicing through the slower cars worked exactly as Day had hoped until the race’s second red flag came out on lap 12. While running second, Shane Golobic flipped wildly in turn three, collecting Dominic Scelzi and Justin Sanders and ending the trio’s night. All three were okay.

Following the red flag, Day led a few new names who had joined the top-5 after the accident wiped out three of the top competitors. Among those nearing the top of the leaderboard was Tim Kaeding who slotted into fourth on the restart, continuing his climb from the lap one spin.

While Day made the race for the lead anti-climactic by pulling away from Rico Abreu in the latter stages, drama developed when Netto again got tripped up on the backstretch, dropping him to fifth and moving Tim Kaeding up to third. Netto came in two markers ahead of TK in the battle for second in points, and Kaeding owned the tie breaker based on wins.

Netto maintained composure after his error, and with just two laps remaining threw a slider on Sean Becker to claim fourth, enough to earn him second in the standings just one point ahead of Kaeding.

Day ultimately held on to win comfortably over Abreu, the only challenge to his triumph coming in the form of his machine’s amount of methanol.

“We started to run out of fuel there with about four to go,” Day revealed. “So, I had to drop down to the bottom and go through the rubber there, so I’m glad it didn’t run completely out of fuel and we were able to seal the deal.”

Rico Abreu held on for second in his Rowdy Energy No. 24. Abreu claimed the runner-up spot back in the season opener at Stockton and capped the year at the same track in the same position.

“Restarts is really where I kind of exceled on picking guys off,” Abreu said. “My car was a little bit free, and the cushion had some whoops and ruts that really upset my car. The race went on and I started searching and didn’t want to be the guy last in line when it laid rubber.”

“On the initial start I got tight and Rico got into me a little bit there. It was a racing deal, no hard feelings,” Kaeding said. “It was an honor to drive for Steve (Kinser) at one point and to be able to drive this car and come from the back to the front.”

Though his night ended in a DNF, Dominic Scelzi had such a wide point lead that he only needed to show up and make a qualifying lap to lock up his first series title. Scelzi occupied the winner’s circle at night’s end in front of his damaged machine as the newest NARC-KWS champion.

“Dammit, I wasn’t going to get emotional,” a choked up Scelzi said. “You look at all the names that have won this thing, Brent Kaeding, Jonathan Allard, Tim Kaeding, Bud Kaeding, Ronnie Day. I mean there’s so many amazing champions of this series that this has just been a pipe dream for me for a long time. This caps off this whole season as the most amazing year of my life.”