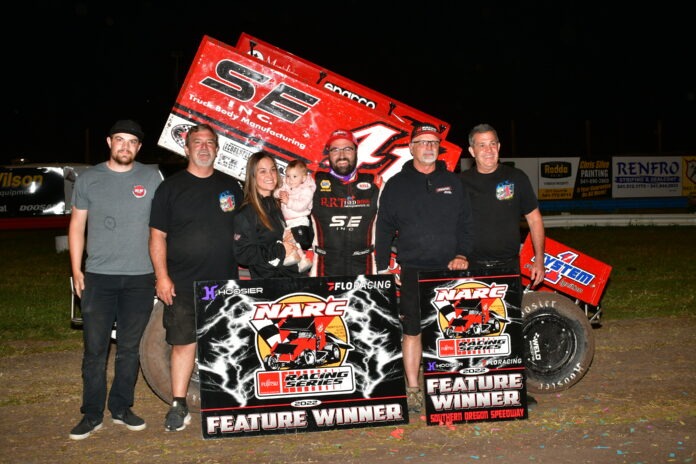 CENTEAL POINT, OR – Entering the 2022 West Coast racing season one of the biggest questions was if Dominic Scelzi would replicate his 2021 “dream season” or if he’d “wake up.”

Well, it doesn’t appear he plans on waking up anytime soon.

Scelzi rolled to his fourth consecutive NARC Fujitsu General Sprint Car win and 19th overall in front of a packed house at Southern Oregon Speedway on Thursday night. With the victory, he became the first series winner in the Pacific Northwest since 2012 as the Oregon track kicked off the Fastest Four Days in Motorsports. It also marked his sixth consecutive podium to begin the season as he continues to extend his early season point lead in a bid for back to back championships.

“I love racing in Oregon,” Scelzi said. “It’s my first win in Oregon, and it looks like we’re going to have to come back every year.”

Scelzi started the race in second as pole sitter, Mitchell Faccinto, led the field to green. The leaders quickly got spread out early on and entered traffic on lap five. A tense moment for the leaders occurred on the sixth circuit as T.J. Winningham spun, forcing them to take evasive action and bringing out the race’s first caution.

On the next restart the leaders again became spaced out, and just as slower cars began to close the margin between Faccinto and Scelzi, the yellow again flew for Steven Snawder who slowed to a stop in turn four.

The green flag flew with 20 to go, and while the action toward the front was limited, battles were fierce throughout the field as a collection of cars jockeyed for spots in the top-10.

With just 11 laps to go heartbreak struck Faccinto. The race-long leader to that point smacked the wall out of turn two, which immediately shredded his right-rear tire. Faccinto limped the Tarlton Motorsports machine back to the pits and came back equipped with a new right-rear. The issue handed the top spot to Scelzi

“I felt like I was kind of closing in on him (Faccinto),” Scelzi commented. “I was starting to diamond off of (turn) four and felt like I was closing in. I was trying to bide my time until we got to traffic. I was lucky I wasn’t too close because I think I’d have got into him there off of (turn) two. He just got right and got into the wall, unfortunate for him. They were really good. I can’t tell you I was going to pass him, but I feel like we were every bit as good as the 21. Sometimes you take a little luck.”

As the laps dwindled, Shane Golobic and Willie Croft waged war for third as Scelzi appeared to be headed toward an easy win as Justin Sanders trailed him. Then on the final lap Golobic’s left-rear tire shredded bringing out the yellow once again and necessitating a green white checkered.

Sanders got a decent jump on the restart and took a peek to Scelzi’s inside entering turn one but couldn’t quite make it work. Scelzi drove his Red Rose Transportation/Whipple Superchargers No. 41 across the line to take the checkered flag with a 1.425 second advantage.

As an added bonus, Dominic completed a night of winning for the Scelzi family.

“My brother (Gio) won by like 47 days at Selinsgrove (PA) tonight,” Scelzi said with a smirk. “I couldn’t let him outdo me.”

“No yellows, I think,” Sanders said of what he needed to win. “I was terrible on those restarts. My car would just lay right. I was tight for about 10 laps and just couldn’t get a good run going. When I had a long green flag run I was actually able to pull up to those guys.”

Completing the podium was Willie Croft, his second straight top-three after his runner-up last weekend at Petaluma.

“I was like Justin and Dominic, just running the high side on the restart and getting tight,” Croft said of his night. “So, I wanted to go to the bottom just to try it, and I got side by side with Shane and actually, I believe, got by him at one point, but he got me back. I knew his tire was going down. I thought he was going to make it, but obviously it blew out in front of me.”