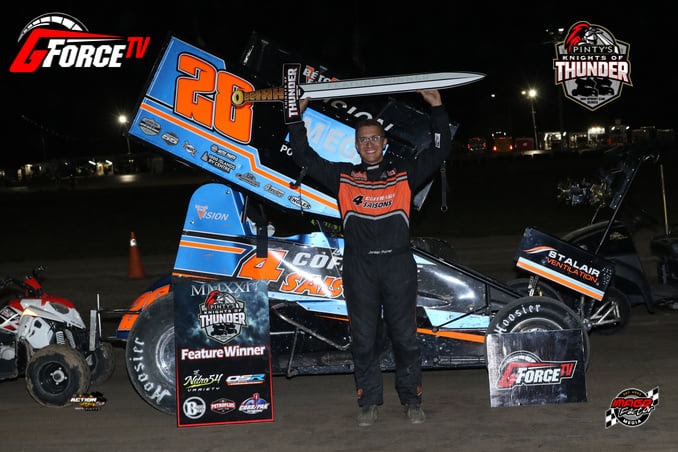 THOROLD, ONT – Jordan Poirier made the long trip from Quebec worth it at Merrittville Speedway by winning the first ever Knights of Thunder 360 Sprint Car feature on Saturday night.

Aaron Turkey and Jim Huppunen were on the front row for the first A-Main in Knights of Thunder history, and Huppunen took the early lead in search of another Merrittville win. Poirier quickly moved up from fourth on the grid to challenge Huppunen for the lead, and made the winning move on lap seven as the two drivers raced through traffic; many of the cars Huppunen was trying to lap were running in his preferred groove on the low side of the track, while Poirier was running through the middle and higher side of the track.

Poirier was able to open a commanding lead, but Huppunen began a comeback attempt as Poirier took his turn picking through traffic. Despite a tricky and slick track surface, the race went the 25 lap distance without a yellow flag and Poirier was able to get clear of the traffic to lock down the victory. Huppunen settled for the runner-up spot, followed by Mack DeMan, Josh Hansen, and Cory Turner.

“It feels really good,” exclaimed the jubilant Poirier afterwards. “It was a long offseason; I felt like I was in my prime by the end last year, so to win the first one of the Knights of Thunder we’re really happy. Thanks for Pinty’s for putting this on. It’s awesome to have a Canadian tour.

“The track was insane,” continued Poirier. “I was surprised that I was able to cross the track like (uncle) Steve used to do, so I have to give it to him. I was searching at the beginning. I was looking at (Huppunen) and he was really good exiting (turn) four but I felt like the cushion was really good exiting the corner and all the lap cars were on the inside.”

Huppunen was relatively happy with a runner-up finish to start the season, especially after running most of the race without brakes.

“I saw Jordan get by me there and I think he threw something at my car because I lost the rear caliper so I had no brakes the rest of the race,” joked Huppunen after the race. “It was a tough go but I’ve got to thank Glenn Styres for having me in his car for another year.”

DeMan methodically moved through the field and felt he may have been able to challenge Huppunen and Poirier if the race hadn’t gone caution-free.

“It’s tough starting seventh, but that’s the way the redraw goes,” lamented DeMan. “Really needed a caution there, but the car was coming on. The car just kept getting better and better and I started to catch (Huppunen) and I saw Jordan way up ahead and I was like ‘We’re gonna need a yellow’ but just great redemption for me and my team; last year we ran one lap and destroyed the car so it’s just good to have the car roll in the trailer and finish third.”

Shone Evans, Aaron Turkey, row eleven starter Ryan Turner, DJ Christie, and Action Sprint Tour winner Jacob Dykstra rounded out the top ten. Heat race wins were claimed by Jordan Poirier, Cory Turner, and Aaron Turkey. The only serious incident of the evening occurred in heat race action when Mikey Kruchka and Mack DeMan tangled on the frontstretch; Kruchka’s car careened into the wall after the contact and did enough damage to prevent Kruchka from starting the feature.

The Knights of Thunder series will next be in action on Saturday, July 24 at Brighton Speedway. Visit www.knightsofthunder.com and www.brightonspeedway.ca for more information.