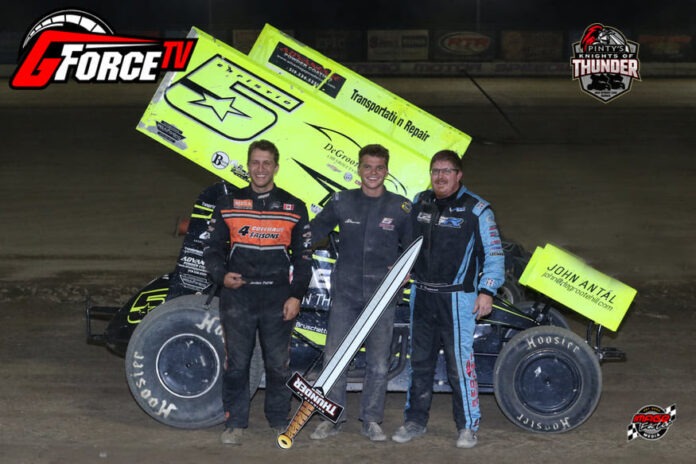 Ryan Turner and Holly Porter made up the front row for the 25 lap A-Main, and Turner led the first lap with row two starters Christie and Poirier hot on his heels. Christie went low and Poirier high as both got past Turner in turn two and began to pull away. Turner and Jim Huppunen jousted for the third spot while the leaders began to work through traffic.

Christie stuck to the low groove in traffic, with Poirier generally running a similar line; Poirier did venture to the high side at one point and lost a lot of ground in the process. Poirier had closed the gap considerably when Dan Nanticoke and Baily Heard both spun on lap 13; Nanticoke was able to keep moving, but Heard was not and the yellow flag appeared. Christie kept the lead on the restart, but another yellow flag was needed when Cory Turner slid into the infield.

Christie again kept the lead on the restart, but the red flag came out on lap 15 when Scott Burk spun out in turn three and Dan Nanticoke hit the wall and flipped wildly. Nanticoke emerged from his damaged car uninjured but done for the night. Christie again held court on the restart and kept Poirier at bay for the rest of the race, while Huppunen gained on both but ran out of time. Poirier settled for the runner-up spot, followed by Huppunen, Ryan Turner, and Jacob Dykstra. The top ten was rounded out with Porter, Aaron Turkey, Travis Cunningham, Tyler Rand, and Shone Evans. Heat race wins for the first-ever Knights of Thunder event at SOMS were claimed by Porter, Dykstra, and Poirier.

The win was especially sweet for Christie after a grinding crash at Humberstone a week earlier.

“That’s our fifth 360 start and we’re in victory lane!” exclaimed Christie after the race. “I’ve got to say a special thanks to (Poirier). I’ve been asking him questions all week; I’ve probably been annoying him, but apparently it has paid off. I think he’s going to stop helping me now.”

Poirier was happy with his second place finish, despite seeing the end of his win streak.

“Hat’s off to DJ; he was awesome,” acknowledged Poirier. “At the first part of the race he passed Ryan and I thought I could get him on the outside but it blows away. The track was in amazing condition. It’s awesome to come race here, and the fans in the stands – it’s crazy! Fun to be back to something close to normal. Second is good for us. It’s a good point day and we’ll return home happy.”

Huppunen was fast in the outside groove early in the race, but moved to the bottom near the end to secure the final podium position. It was a bit of redemption for Huppunen, who spun out racing for the lead with Poirier at Merrittville on Friday.

“Awesome facility here,” Huppunen noted after the race. “The fans – if you guys didn’t like that you may as well not come again! That was a hell of a race. This track, it’s badass…like, it’s awesome. We were good, but I just can’t get the bottom down there. I just gotta figure out the brakes on this car a little more.”

The Pinty’s Knights of Thunder series will next be in action on Friday, August 13 at Merrittville Speedway. Visit www.knightsofthunder.com and www.merrittvillespeedway.com for more information.

About the Pinty’s Knights of Thunder Sprint Car Series: Founded in 2021, the Knights of Thunder series is a traveling winged 360 Sprint Car tour based in Ontario, Canada. Each points-paying event on the 2021 schedule will pay a minimum of $2,000-to-win and $250-to-start, and selected events will be broadcast live on GForceTV. The championship winner will be rewarded with $5,000 and a Pinty’s VIP package for the 2022 Bristol Dirt Race, while 10th place in the championship standings will pay $1,000. The 2021 Knights of Thunder Sprint Car Series is made possible with the support of Pinty’s Delicious Foods, Corr/Pak Merchandising, Stoneridge Specialty Insurance, Hoosier Tire Canada, Burger Barn, Nitro 54 Variety, Strickland’s Brantford Chevrolet, and EPIC Racewear. Visit www.knightsofthunder.com for more information.