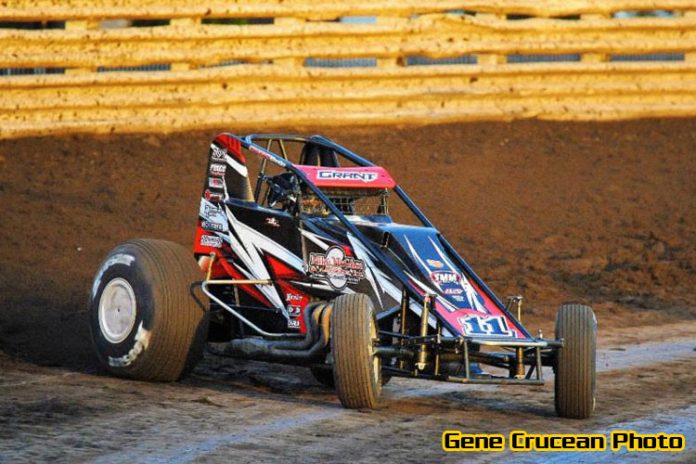 KNOXVILLE, Iowa – In one of the most highly-anticipated events on the 2017 USAC calendar, Justin Grant made it a night to remember as he led wire-to-wire to win the AMSOIL National Sprint Cars’ return to the famed Knoxville Raceway Saturday night after a six-year hiatus.

Grant, of Ione, California, finished 25th in his lone Knoxville start back in 2011, but there’d be no parallels drawn from that result to his performance on the half-mile Saturday night as he was in a class of his own throughout the 30-lap main event.

However, early on in the night, Grant couldn’t have anticipated the end result would go as smoothly as it did following a rocky beginning. The team fine-tuned their way throughout the evening, swapping out parts and pieces on the Sam McGhee Motorsports/Mike McGhee & Associates – Brown & Miller Racing Solutions/Maxim/Foxco until they hit the sweet spot in time for the main event.

“In hot laps, I wasn’t very comfortable,” Grant stated. “I was a little timid on the cushion and I didn’t really feel all that confident that I wasn’t going to crash up there. So, we just kept working on it all night. We kept making ground on it. We came in from the heat race and felt like we were pretty close and told Sam about a couple of the issues I had with it. He went to work on it and got it dialed-in. It couldn’t have been any better for the feature.”

Grant’s race began from the pole position alongside Robert Ballou, a recent returnee to the scene following an eight-month layoff due to neck injuries. Yet, Grant would get the best of Ballou right from the start as he slid up to the cushion ahead of Ballou in turn one for the top spot.

Grant built a gap between he and Ballou on the opening lap as Ballou battled with Fridaynight’s I-80 Speedway winner Tyler Courtney. At the exit of the fourth corner, Courtney and Ballou made slight contact, sending Ballou sideways and Courtney near the outside guardrail. Both continued after the brief skirmish as Ballou maintained control of second while Courtney fell back to fourth as he wrestled back control of his machine.

Shortly thereafter as the field hit the back straight, a melee ensued as the 9th, 10th, 11th and 12th place cars were all involved in an accident that saw both Jon Stanbrough and Nick Bilbee flip multiple times while Brady Bacon and Hunter Schuerenberg were also caught up. All drivers would walk away unscathed and Bacon and Schuerenberg would restart.

On the lap two restart, Courtney nearly saw his race end as he biked his ride on the entry to turn one before landing on all fours, ricocheting his right rear tire off the guardrail before gathering it up and carrying on after dropping three spots to seventh.

Meanwhile, up front, Grant had constructed a half-straightaway interval on lap six between he and second-running Ballou, who owned a half-straightaway advantage of his own over third-running Courtney who had settled into a groove and worked his way back into the top-three with a first turn slide job of Chad Boespflug.

Just before midway, Grant had already begun his ascent into lap traffic, attempting to maintain his sturdy two-plus second lead as Courtney began to close on Ballou for second. Courtney had already averted disaster just laps before, but on lap 15, he couldn’t channel his inner Houdini for a second time as he hooked the turn two cushion while closing in on the lapped car of Aaron Farney.

Courtney proceeded to snag the berm with his right rear, the proceeded with a violent sequence of barrel-rolls and nose-to-tail end-overs that saw him sail higher than the top portion of the expansive ARMCO barrier in front of the National Sprint Car Hall of Fame suites. After roughly six-and-a-half bone-jarring flips, Courtney finally came to a rest as flame briefly appeared from the bottom of the battered machinery. A sigh of relief swept over the crowd as the Indianapolis, Indiana driver quickly emerged from the wreckage uninjured.

A strong suit for Grant each time was his prowess on restarts. Right from the drop of the green time-and-time again, the 26-year-old instantly distanced himself from Ballou, but that didn’t inherently put Grant’s mind at ease with the 2015 series champ hot on his trail.

“Restarts are always scary, especially at a big racetrack where you’re running on the fence and you’re prone to receiving sliders on a restart,” Grant admits. “I just tried to get a really big bite off turn four and stay in the moisture as long as I could. I tried not to mess up and just wanted to get down into turn one as fast as I could. I was confident in the car, but you’re still a little bit nervous especially when you have a hard charger like Ballou behind you. If he has a window, he’s going to throw something in it.”

The final yellow of the night arrived when Dave Darland, who was inducted into the National Sprint Car Hall of Fame just hours before, hopped to a stop atop the turn two cushion without making contact on the 18th lap.

Grant’s final restart on lap 19 was just as solid as the rest and, over the next handful of laps, Grant increased the interval each time at the stripe as he firmly established his position at the head of the pack. All that was left for Grant was to navigate through the tail end of the field in the closing laps.

The sailing was smooth for Grant the remainder of the way as he cruised to a 1.2 second victory over Ballou, Boespflug, Chase Stockon and C.J. Leary for his season-leading fourth series victory of the year while extending his point lead to 97 over Windom heading into Eastern Storm.

After 137 starts between 2010 and September of 2016, Grant’s USAC National Sprint Car win total stood at three. In the last eight months with Sam McGhee Motorsports, Grant has already picked up five victories in a mere 17 starts. Additionally, in ten 2017 starts, Grant has yet to finish outside the top-four.

With success seeming to come so naturally, so quickly, to Grant and McGhee, it’s easy to rest on your laurels, but Grant feels that there’s always room to make improvements.

“You try to pick out the spots where you could’ve been better or where you think you could’ve made up a little more ground or where you could’ve made less mistakes,” Grant explains. “It may have looked perfect, but there’s a handful of mistakes I made throughout it. If somebody had as good of a car as we had, they could’ve capitalized on it. As a driver, you catalogue those and make sure not to do certain things the next time. Fortunately, tonight, we had a car that was good enough that nobody could even get near it. But in the future, somebody might. I try to work on minimizing mistakes and I go back and watch the video to see what I did right and what I did wrong. We always strive try to keep plugging away and get better every night. Yet, at the same time, you want to stay the course and not start chasing something that gets you off track.”

By all accounts, USAC’s return to Knoxville was a rousing success with the track’s largest crowd of the year on hand. It’s an atmosphere that Grant craves and eagerly anticipates experiencing regularly for years to come.

“It’s so cool to race at this venue with all its history and the huge crowd of people in the stands,” Grant praises. “Everybody comes down to the front stretch after the race. It’s just a really neat atmosphere. I couldn’t believe the number of people who came down and told me they’d never seen a non-wing race. They said they just loved it and how they’re going to come back for more and how much they want us to come back next year. We want to come back! It’s the sprint car capital of the world and we want to be racing here.”

Ballou earned his third-straight top-four finish since his comeback in mid-May, picking up a solid runner-up finish in his Ballou Motorsports/Rossie’s Feed & Grain – Deaton’s Waterfront Services/Eagle/Ott. However, the Rocklin, California native is not exactly satisfied with his run as he expects to be at the forefront night-in, night-out.

“We got beat fair and square tonight,” Ballou said. “Justin ran 30 perfect laps and we pretty much (struggled) all night compared to where I feel we should be. I’m rusty and I’m trying to get this team back going. We need some sort of a jump start or something. Justin and the McGhees are on top of their game and we’re just trying to figure our car out. I’m picky, though. If it’s not comfortable, we might as well sit at home and watch from the couch. It wasn’t very good all tonight, but we kept trying and trying and we thought we stumbled on something for the feature. It was terrible from the drop of the green. I’m just glad that we’re second because it felt like I had about a 10th place car. It’s been a tough road, but just to race again is a blessing. I just have to go do my homework.”

After a recent struggle that saw three-straight finishes of 11th or worse, Hanford, California’s Chad Boespflug got back on track with a third-place run in his Dynamics, Inc./Mean Green – PAC Springs/Maxim/Claxton.

“We’ve been struggling the last few weeks,” Boespflug recalls. “To get back on the podium tonight after the way we’ve run the last few nights is pretty amazing. We made some strides tonight and I think we found some things. Hopefully, we can carry this momentum into Eastern Storm. We have to get a lot better to catch up with Justin. It was my first time here at Knoxville. Maybe next year we can do a two-day show. I’d definitely be down for that.”