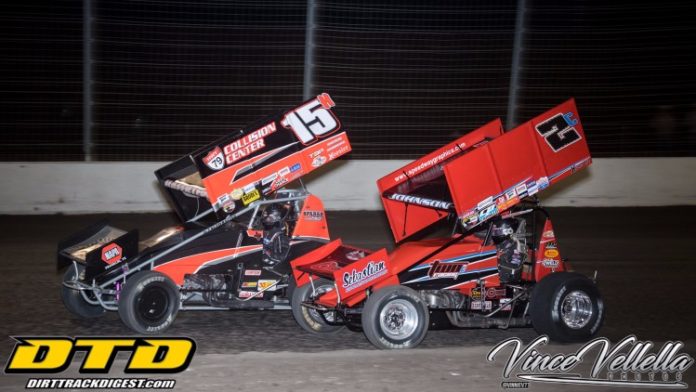 TULSA, OK – A familiar favorite, and a new destination is on deck for the Lucas Oil American Sprint Car Series National Tour presented by the MAVTV Motorsports Network as the series hits the famed clay of the Knoxville Raceway in Knoxville, Iowa on Saturday, July 29 for Weiler Night at the Races before debuting at Mason City Motor Speedway on Sunday, July 30.

For the traveling teams of the American Sprint Car Series, Saturday’s showdown at Knoxville Raceway is the final chance to get tuned up for the 27th ASCS 360 Knoxville Nationals presented by Great Southern Bank on August 3-5, 2017. As such, several teams have expressed a desire to compete under the Knoxville format as the traditional ASCS format does not utilize qualifying.

With the expected amount of cars and the addition of the Nebraska 360 Series, teams will time in using the split A/B Group system. The same system has been in place for World of Outlaw events as well as the Capitani Classic. At the request of ASCS teams, Saturday’s show will also award full points.

“We had a meeting with our teams and gave them the option since several had made the request. Most were good with either our system or Knoxville’s but wanted to make sure it was a point paying event. We don’t have a series without these teams and we value their say very much and it’s very simple at Knoxville. Qualifying is everything and if you start slow, you’ll never dig out,” explained ASCS Founder, Emmett Hahn.

A $4,000 to win, $400 to start affair, Saturday’s trip to the “Sprint Car Capital of the World” marks the 60th time the series has graced the clay of the Marion County half-mile since 1996. With at least one race every year to this point, the list of winners is staggering with a pair of Oklahoma natives atop the win count. Numbering seven wins, Bixby’s Shane Stewart is ahead by only a single victory over Oklahoma City’s Wayne Johnson, who already has a Knoxville Raceway victory in 2017, enters on a hot streak that includes the sweep of the Grizzly Nationals at Gallatin Speedway.


In all, 29 drivers have earned at least one Lucas Oil ASCS National Tour win at Knoxville Raceway with a dozen earning two or more.

Breaking into new territory, Mason City Motor Speedway on Sunday, July 30 stands to be the fifth Iowa oval to see action with the Lucas Oil ASCS National Tour. Operated by USMTS president, Todd Staley, along with Al Hejna, the half-mile sits on the North Iowa Fairgrounds.

Sunday offers up a $3,000 winner’s check and $400 to start the A-Feature.Sunday’s event will utilize traditional ASCS draw/passing point format and is the only Sprint Car event on the 2017 lineup. The last time Sprint Cars graced Mason City clay was 2016 with the National Sprint League victory going to Missouri’s Danny Lasoski over Sammy Swindell and Ian Madsen.

Going into this weekend’s pair of Iowa events, Sam Hafertepe, Jr. looks to extend his advantage over Aaron Reutzel, as the pair of Texas drivers are separated by only 30 markers. With both favoring well at bigger tracks, as evident in the weekend split of the Rushmore Rumble, both are being chased by Oklahoma’s Matt Covington, who has not finished outside the top-ten in his last 15 starts.

Taking this past weekend off to get engines in place, New Mexico’s Johnny Herrera holds forth with Wayne Johnson fifth. Picking up a much-needed win at Creek County Speedway this past Friday night, Seth Bergman his sixth with Blake Hahn seventh.

Racing at Castrol Raceway in Canada this past weekend with a fourth place result, Skylar Gee leads the Brodix Rookie of the Year standings with Harli White in tow. Cleared to return to competition following a crash earlier this season at Knoxville Raceway, Canada’s Alex Hill will resume her tour this weekend as well.

Saturday, July 29 at Knoxville Raceway gets underway at 6:45 P.M. (CDT). Admission is $20 for adults with a $5 discount for kids 13-19. Children 12 and under are free into the grandstands. Pit Passes are $25. Tickets are sold at the Knoxville Raceway Box Office. The 410cid division will also be in action. For more information on Knoxville Raceway, log onto https://www.knoxvilleraceway.com.

Sunday, July 30 will begin with Hot Laps at 6:00 P.M. and includes USRA Stock Cars, B-Mods, Tuners, and Hobby Stocks. Admission is $20 for adults and kids 12 and under get in free. More information on Mason City Motor Speedway can be found at http://www.masoncitymotorspeedway.com. 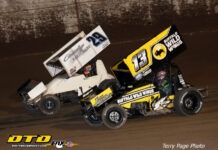 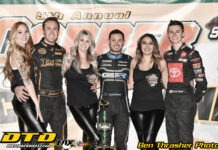