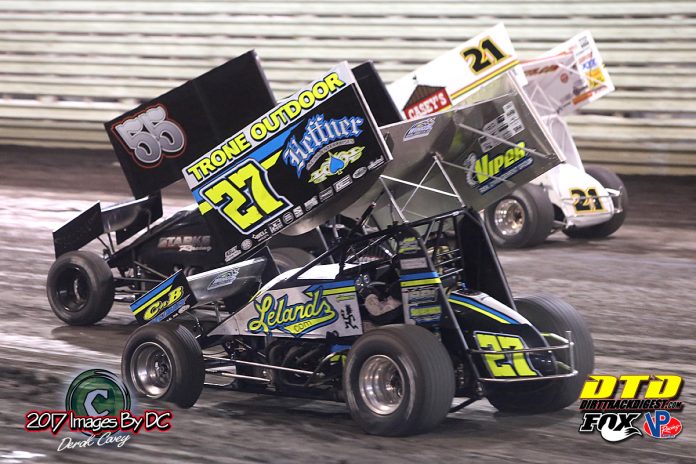 Usually the saying goes, “there’s no place like home,” but that hasn’t been the case for Greg Hodnett and his Heffner Racing team in 2017 as they’ve simply struggled. Last season Hodnett was a dominant force in Pennsylvania winning over 20 races. This year his fortunes have changed. The team has lacked speed on a night in and night out basis holding them to only a handful of wins.

Friday night the team invaded the Knoxville Raceway for preliminary action in the Knoxville 360 Nationals. Hodnett started fifth, grabbed the lead early and never looked back as he flew to his second career Knoxville win. His first ever in a 360 Sprint Car at the historic facility. “It’s always nice to have a change of scenery,” cited Hodnett. “I think any time you can get away and do some different things you kind of get, not to sound weird, you kind of get in a routine. You leave at the same time, you get there, you use the same setups and you are pretty consistent. We are going to start here and we are going to work from there, that type of thing. When you go to these kind of places, these types of events, your box now becomes limitless. You get in a rut where you run the same bars, the same stagger. We kind of do the same thing every week, but we go to a new place, new surroundings, new situations where you got to throw it away. Not throw it away because you are going to start with a base, but you got to work pretty quickly and recognize pretty quickly, in unfamiliar surroundings, when you have to change. I think it helps us. It helps expand your mind a little bit and think outside the box. Sometimes it’s very helpful, sometimes it’s very frustrating and very humbling, but fortunately for us it was very rewarding also.”

Hodnett was able to beat one of Knoxville Raceway’s best in Brian Brown. Brown, a former 360 Nationals champion, battled Hodnett and Trey Starks while leading laps before succumbing to pressure from Hodnett. Beating Brown helps Hodnett know they are in the ballpark of where they need to be for Saturday night’s A-Main.


“We are very fortunate and very blessed,” he said. “I know how good Brian is here and to be somewhat relatively competitive, not going to use him as a gauge but I kind of have to because he sets the bar here. If we can be competitive with him I think we have a pretty decent car. Hopefully we can continue that tomorrow night and just take advantage of anything we get.”

Hodnett’s last race prior to Friday’s action was at Selinsgrove Speedway where he won the Mach 1 Chassis National Open for 360 Sprints. The team has finally stumbled onto something as of late that’s helped them get back some of the speed that propelled them to so many wins last year. They’ve changed everything before finally hitting on something that seems to be working.

“We have changed everything that we can change on our car from different wing combinations to different bars to different shocks to different heights to different everything,” commented Hodnett. “I think we kind of settled into a combination. These guys can attest having that combination that gets you fairly comfortable and up to speed is great when you have it.  As long as nothing changes you are good, but when you lose it and have to find it again it’s very difficult. We’ve switched cars and we kind of settled in on a shock package and a car package and kind of a wing package that seems to work fairly consistently or a little more consistently. We are just working from that base. I think that’s come around in the last month as you said. Hopefully it can culminate to a decent rest of the season.”

Hodnett used the extreme bottom to work his way forward and then to take the lead. He found the moisture quickly with the car taking a liking to the inner lane around the speedway. He drove by Jeff Swindell, Brown and eventually Starks to get the lead before running away in the closing laps.

“The bottom had moisture as it usually does,” mentioned Hodnett. “I just tried to hit the moisture and not drive by it. It’s hard to do. Knowing when to throttle, how to throttle, where you are braking and all that kind of stuff is not the easiest thing. If your car won’t let you do it then it’s really bad, but for whatever reason, dumb luck, I don’t know, it let me do it. I could stick there and not slide out too much and get going the other way so I don’t know, I just got lucky.”

It was a rare 360 Nationals start for the Spring Grove, Pa., driver as he normally runs Port Royal Speedway’s Living Legends Dream race this weekend. Port moved the race to an earlier date allowing the team to make the easy decision to come to Knoxville to get some laps leading into the 57th running of the Knoxville Nationals. He really had nothing to gain by staying in the Keystone State.

“We’ve struggled so bad at home that points aren’t really an issue so at this point there is nothing to lose, at least around home,” joked Hodnett. “It’s just a regular weekend at home so we thought we should get out here and get as many laps as we can and try to catch up with these guys and get up to speed.”

So far the strategy is paying off. Saturday will be the first of many tests in the coming week as Hodnett rolls off from the inside of the fourth row. He’ll have his work cut out for him, but if he has the speed he had on Friday night he might just find himself doubling up.