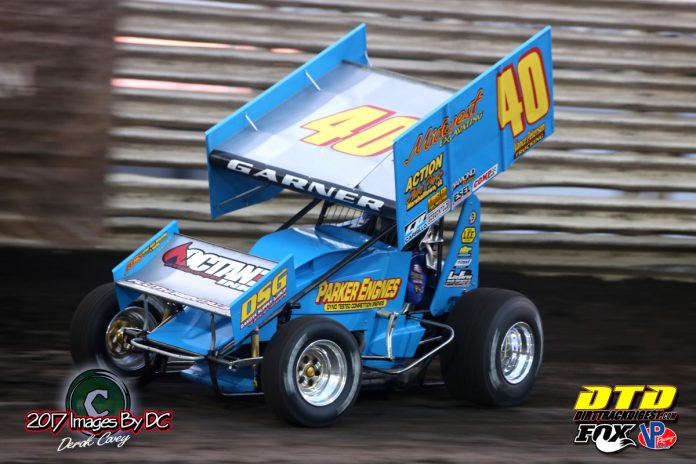 When you talk about 360 Sprint Car racing at the Knoxville Raceway one name is synonymous with the division; Clint Garner. The Sioux Falls, S.D., driver has seven career track titles in the division and sits second on the all-time 360 wins list with 32 coming in action on Saturday. There was thing major piece missing from the resume, a Nationals Championship, but not anymore.

The driver who got the loudest cheers at the beginning of the night also got the loudest cheers at the end of it as he stood waving the checkered flag in Victory Lane after leading all 25-laps of the 27th edition of the Knoxville 360 Nationals for his first ever triumph in the event. He finally put a complete week together to earn the $15,000 paycheck.

“There was a lot of pressure on me all weekend long,” commented a still smiling Garner. “You know, the first thing we did is come and pull that good number which is great. You have to have that pretty much to do this, but as soon as you are sitting there everybody expects quick time. As a driver, I hate to even say, as the underdog, right away the butterflies came in. I went out and did my best. I didn’t do very good. I came in and said there was no way that will stick. The track kind of gave up and nobody even had a chance at it for quick time. That started it all off. Then in heat race I did everything I could to screw that up too. I about crashed coming off the line on the first start and one other time I was getting greedy going for third when all I needed was fourth and about looped it. It came around and I kept it. I said that’s it, just finish this heat race and have a good A-Main and see what we can do on Saturday night.”

Garner’s son kept telling him in the pits that tonight was the night that he was going to finally get it done, but the 42-year-old driver never let himself believe that. He didn’t want to think about victory or get worked up before actually reaching that point.


“He had all the confidence in the world that we could beat these guys,” cited Garner. “He swore up and down it was going to be our night. I told him that was no way to talk. We are just going to do our best and wait and see, but we are definitely not going to sit around here and talk about winning this race before it even happens.”

Well, he was right.  Garner earned the pole position for the start of the feature and unlike years past, he got the lucky break. On the opening lap Wayne Johnson actually got the better start which propelled him ahead of Garner but a spinning Greg Hodnett negated the start. Garner wasn’t going to be beat a second time. He jumped out on Johnson the next time. In year’s past, things just didn’t fall that way as he’s been beat in the 360 Nationals by some of the best in the business. He came into the night only ever leading seven laps of a Nationals event, now he’s proudly got 32 laps led and 33 career wins.

“I don’t know if I ever should have won this race,” said Garner. “Last year I had a good starting position and Sammy Swindell was right beside me. To say that I should beat Sammy Swindell is nothing I would ever do. Starting on the pole, with him beside me, is going to be tough every single time. I can count the number of times I’ve passed Brian Brown on one hand. I can count the number of times I’ve passed Wayne Johnson on one hand. I mean Sammy too, Terry McCarl, Danny Lasoski, these guys show me the way around every single time on the track. So to beat them tonight, I can’t tell you how ecstatic we are as a team.”

A mid-race caution for a slowing Calvin Landis set up one more opportunity for the entire field to take a shot at Garner. He didn’t get a great jump with his Boyd and Glenda Fluth owned No. 40, but he made sure to slam the door going into the first corner. He dove low blocking Johnson’s progress to prevent him from take the lead.

“I don’t know who I give the credit it to on that, usually I call it a Brian Brown,” commented Garner. “He protects the bottom every single time off a restart so you are hardly ever going to see me take a restart and not protect. You leave a hole, these guys can take and go in there wide open pretty much out of control, even though they have control, but they are going to get in your way. They are going to shove you into the cushion. You can’t leave the door open to keep these guys behind you. You’ve got to do your best and head her out into the slick and see what you can do with it on the way out.”

Although Garner is well-known at Knoxville, he doesn’t get the accolades of Brian Brown or any number of other super stars drivers that pop in and out of competition at Marion County oval.  He’s a hard working guy that is fortunate to get to race Sprint Cars on the weekend. His full-time job isn’t racing. As a result, he feels like the underdog compared to teams that he competed against and beat on Saturday.

“The money is great because my team needs the money to keep going,” he said. “That’s how we race. We race throughout the year and the championships pay my bills, but from the looks of it right now I’m probably not going to get the championship so that’s going to be a few thousand dollars short. So that will be nice getting the money. We definitely feel like the underdog. We don’t get to go to Florida. We don’t get to go to Australia or California or anywhere. All winter long when these guys are out racing I’m moving snow on a skid loader.”

The win is important, but for Garner there isn’t time to celebrate. His name goes down forever as a winner of the event and that’s good enough for now. His attention will quickly turn to Sunday’s Capitani Classic. Garner has joined forces with Pete Grove for a full assault on the 410 Nationals. He’ll be hoping for the same result, but he has realistic goals for the week.

“Truthfully the history books are going to be the coolest part about this,” cited Garner. “It feels the same as any other win other than getting to walk across the frontstretch and getting to come here to answer questions for you guys. It will come and go. Tomorrow is the Capitani Classic and Pete Grove has brought a car over for me to run the 410 this week. There really isn’t going to be any partying for me tonight because the biggest night of the year outside of this deal we just did is starting tomorrow. I have no intention of winning tomorrow, but I need to get the car ironed in and make sure that we can have laps come Wednesday night. It’s just another day.”

It is in fact just another day, but it’s a day that will go down in history as the day he became a Knoxville 360 Nationals Champion. 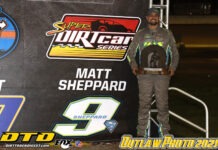