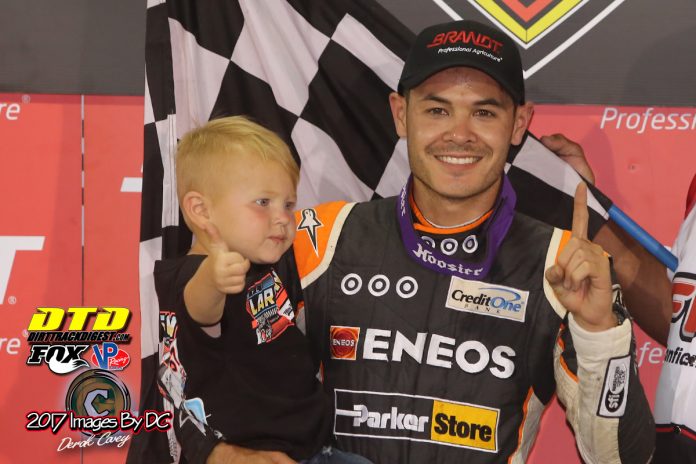 Kyle Larson turned in a dominant performance on Wednesday in the opening event of the 57th Annual Knoxville Nationals. The Elk Grove, Calif., driver led the entire distance for his second career qualifying night win at the Knoxville Raceway.

“It was a smooth, clean race for me,” mentioned Larson. “I started on the pole and won it so it was good. Hopefully we can be here on Saturday.”

Larson didn’t get the jump at the green flag, that feat went to Austin McCarl who beat him off of turn four to take the lead. Larson regrouped quickly, powering by McCarl off the exit of turn four the next time around. He was good from that point forward working the bottom initially before migrating his way to the top of the speedway.

“It was a good race,” said Larson afterwards. “I’d say I didn’t get a good start, but I didn’t really get to control that start. I was able to get to the lead quick and run the bottom decent. I don’t know, seven or eight laps. Then I was starting to get a little bit free and I had to slow down too much. I tried running a different line that I tried in the heat race. That felt okay, but didn’t really have the grip there. Once I got up top I felt like I had good speed and I could still slide the lappers pretty easily and carry a lot of speed on entry.”


The main question is, will Larson be able to run on Saturday night?  He currently sits fifth in the overall points which should be good enough to put him into the 50-lap A-Main on Saturday night. At this point Larson isn’t sure how things will play out.

“Right now I’m not allowed to race,” he said. “In the contract with Chip (Ganassi), I can race up until, well I have to have a day off before I’m on track in Cup. That’s why you see me race a lot on Mondays, Tuesdays and Wednesdays because we travel the day before and we are on track on Friday. Obviously, on Saturday we are at Michigan practicing and we race the next day. It would be a little bit of a conflict there, but I’m going to definitely talk to Chip. I hope he understands how big this event is to me and that we are in a good spot in the Cup Series with wins and bonus points and maybe he’ll allow me to come race here. I don’t know.  I got my fingers crossed. I think I know what his answer will be, but hopefully I’m wrong.”

By the crowd reaction to his win on Wednesday night, the fans are behind him and are definitely hoping Ganassi gives him the go ahead.