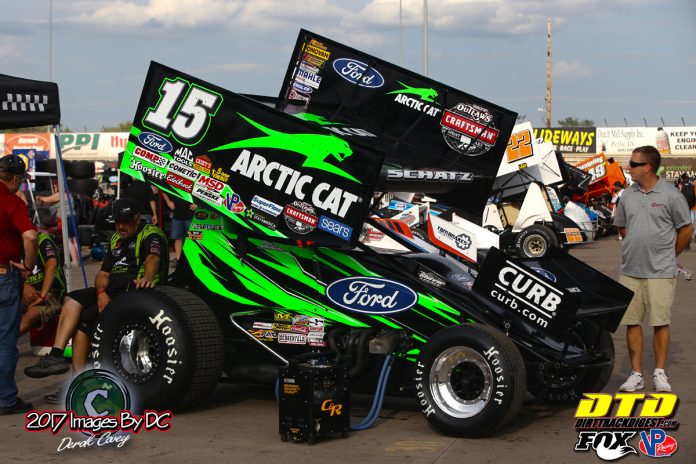 Donny Schatz came out of preliminary night one of the 57th Annual Knoxville Nationals as high point man after a solid performance in the A-Main. The nine-time Knoxville Nationals winner crossed the line in second as he couldn’t muster enough to get to eventual winner Kyle Larson.

Schatz did what he had to do in time trials as he timed within the top five. He was the only quick qualifier to win his heat before he went out to chase Larson across the line in second. By Schatz’s account, it was a decent night.

“It was a very decent night,” commented Schatz. “I thought maybe the pill draw was going to be the all important thing, but the race track stayed really good. You know as well as I do everything is here with points counts. All you can do is try to get yourself through the heat race. We were really good in the heat.”

Even though Schatz is a multiple time recipient of the $150,000 top prize, he takes nothing for granted. He knows that getting through qualifying night in good position for Saturday is the most important thing.


“Obviously we’ll be going straight to the main on Saturday night which is a blessing when you come here,” cited Schatz. “Your goal coming in the gate, irregardless of whether you’ve won this or you’ve never made this race, is first to get in that A-Main. You can’t win unless you get in it. That hurdle is out of the way. Now we’ll focus on what’s next.”

Schatz’s race car was too free during the feature to allow him to move around like he needed to. As is always the case, the crew will tweak the car getting him ready for Saturday night where he’ll return as the odds on favorite.

Greg Hodnett just keeps on rolling. His team has found something at Knoxville that’s made them fast since they got off the trailer last weekend for the 360 Nationals. He continued to have speed in the  25-lap event finishing in the third position after falling back as far as fifth. The team continues to make adjustments as they look for even more.

“It’s a multitude of things,” Hodnett said when asked about what’s made them so good as of late. “We’ve changed wing stuff, shock stuff, car stuff and I’ve had to change the way I’m driving. If you have anything on the car that you can change we’ve changed it at least once, maybe twice.”

Once again Hodnett motored around the bottom early before getting things moving forward midway through the race on the top. He crossed third behind Larson and Schatz which propelled him to a fifth place in the overall point standings. That should be good enough to secure a spot in the A-Main.

Spencer Bayston put a lap time that was good enough to be in the top five in time trials. Unfortunately he was light on the scales and put the rear. He was a scratch for the rest of the night…

Aaron Reutzel lost a qualifying spot in his heat race after losing his muffler. The disqualification dropped him to last in the heat and moved Shane Stewart into a transfer spot. Reutzel scratched for the night…

AJ Moeller was in solid control of the B-Main when an apparent flat tire sent his car crashing into the outside wall in turn four. He was done for the night…

Lucas Wolfe transferred through the B-Main after timing in the top 10. He was moving up through the field when smoke billowed from his No. 24 ending his night…

Tim Shaffer grabbed the final spot in Wednesday A-Main on the final lap of the B-Main. He worked around Sheldon Haudenschild for the position. He started 24th in the A-Main and made it to 12th at the conclusion. That was good enough for hard charger honors.