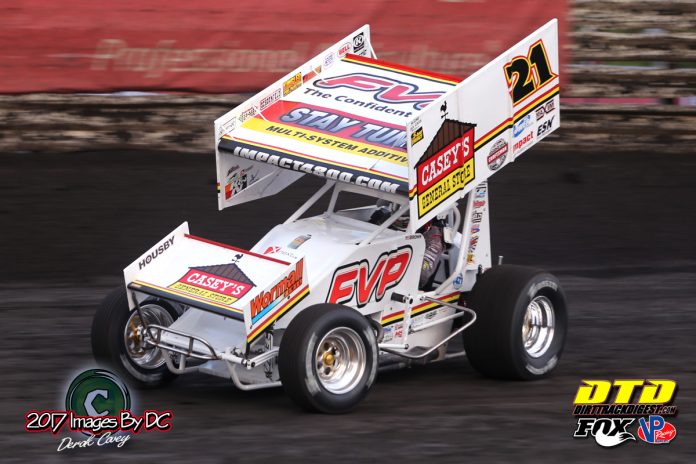 Brian Brown locked himself in Saturday night’s 57th running of the Knoxville Nationals on Saturday night but it wasn’t as easy as he would have liked. The Grain Valley, Mo., driver had his work cut out for him along with having some luck along with the way.

He didn’t feel like he turned the best of laps in time trials but he still managed to put himself in the top five. In his heat race things got hairy as he had throttle issues before running over the back of another car at the start. Fortunately nothing broke and he quickly regrouped to drive himself up through the field to secure a transfer position to the A-Main.

“I probably ran the two worst qualifying laps I’ve ran all year long here,” commented Brown. “We got a good pill draw and was able to stick in fourth. Then in the heat race, on the first start I got going pretty good and somebody through something off one of the cars. Something went through the hood and stuck the throttle wide open. I knew at that point I was going to have a bit of an issue trying to not crash it. We took off on the second start and somebody kind of choked up and next thing you know I’m on the back of Paige Polyak with wheels up in the air. It was bad. When stuff like that happens you almost just have to calm yourself back down and just figure out how you are going to manage your car. We were able to get back up there and get to third.”

The feature had its fair share of ups and downs as well. He didn’t get the best of starts, but he rallied to get back up through to eventually come home in the second spot. At one point he was nearly over as he bounced on the cushion with two wheels off the ground.


“I was able to get back through there,” cited Brown. “My car was pretty maneuverable. I passed David (Gravel) for second on a restart and we got racing there pretty hard. I just missed my line and he got back by. At that point, I said lets cruise here for a bit. I caught Mark (Dobmeier) then and I was on two wheels in three and four. I thought that was enough adventure and fun for then night. Let’s get this thing to finish.”

Brown’s night was good enough that he’s earned the fifth starting position in the 50-lap finale on Saturday night. It marks a return to the A-Main that he’s been close to winning on several occasions only to come up short. Last season he didn’t even get that opportunity after a crash on Friday night derailed his whole week. He failed to make it out of the C-Main on Saturday. It was a humbling experience for the veteran driver.

“I’ve been saying all year that this is just a race and this that,” said Brown. “That sounds good, but after being in the C-Main last year and not even being in the show, it just made me respect this place a lot more and knowing just to get in the A-Main you have to earn it. To go from the C-Main to starting fifth on Saturday, I think we have a car capable of winning if we get a little bit better.”

Dynamite Does Enough to Get In

Mark Dobmeier’s third place finish scored him enough points to lock himself into the A-Main with a 13th starting position for the No. 13. Dobmeier seemed to have the field covered on Thursday night but traffic was not his friend. He just couldn’t get through traffic like he needed to which allowed Gravel and Brown to eventually work their way by.

“I think David (Gravel) nailed it right to a t,” stated Dobmeier. “Sometimes running second is a better spot to be. In clean air it was rocking and rolling as I caught those lapped I was a little bit hesitant. I didn’t know how close they were and I felt the car was rolling pretty good. I could have peeled off. I saw the moisture down in one and two and that’s where David got me. I saw it, but I was a little bit hesitant because I didn’t think I was close enough to that lapped car to run across and come up in front of him. At the end of day I hesitated a little bit that’s what allowed him to get up in front of us.”

It was a tough night for several World of Outlaw Sprint Car Series regulars as Clyde Knipp, Greg Wilson and Brent Marks were all scheduled for the C-Main. Marks scratched after his time trial was disallowed for a wing that was too far forward. Wilson transferred to the B-Main but came up short of making the A. Knipp didn’t have enough to transfer out of the C…

Spencer Bayston was allowed to qualify a second time after he was disqualified on Wednesday for being light on the scales. It was determined that there was an issue with the scales. Chase Wanner was also offered that opportunity but he did not attend…