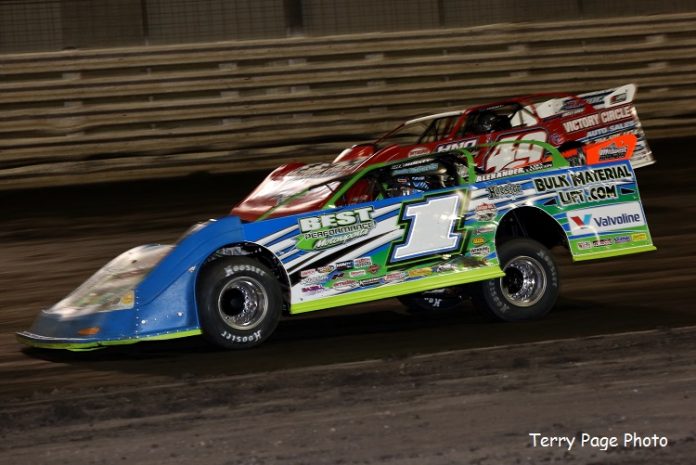 KNOXVILLE, IA – Current Lucas Oil Late Model Dirt Series point leader, Josh Richards took the lead on lap 16 from Jared Landers and then held off Landers to take the opening night of the 14th Annual Lucas Oil Knoxville Late Model Nationals at Knoxville Raceway. Richards started ninth on the grid and darted around leader Jimmy Owens, who pulled out of the race while leading.

The 25-lap race saw four different leaders with Kyle Bronson, Landers, Owens, and Richards each holding the top spot during the race. The 29-year-old Richards who has four second-place finishes in the $40,000 finale on Saturday night is seeking his first career win in the crown jewel event.

“We had a really good car,” said the winner in Lucas Oil Victory Lane. “I hate it for Jimmy. He had a good car as well. I am not sure whether an oil line came off or what. Our car felt good on the bottom. We need to work on it some for Saturday’s big one. That cushion up against the wall was a little too treacherous for me. It feels good to get a win tonight. ”

“The car was really fast. This track is tricky. We have never won the big one here at Knoxville so this would be a good weekend to get it done. To get a big night under our belts like tonight means a lot. We will work on it tomorrow and hopefully be even better tomorrow night. ”

Landers charged hard at the end, but couldn’t catch Richards even in traffic. “Thanks to all the crew guys for their help. This is a brand-new car – the first-time we have been on the track with it. I am happy right now. We had a good shot to win tonight.”

Davenport took the third spot after starting seventh. “I finally found a line I liked out there. It was tricky through one and two there. We will take some good notes from tonight and be ready for tomorrow night.”