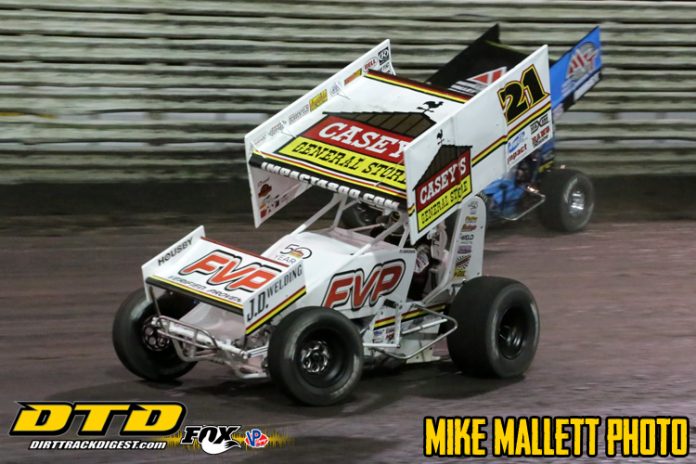 KNOXVILLE, IA – Carson Macedo came up just two laps short of the improbable on Saturday night in the 28th running of the Knoxville 360 Nationals. Macedo had managed to work his way up from the seventh starting spot to take the lead in the 25-lap event.

Unfortunately for Macedo the track began to take rubber on the bottom. His lane was the extreme top side. It had helped him pass Terry McCarl for the lead.  He was married to that lane.  McCarl, who fell back to third, was able to regroup and get things rolling in time to drive back by Macedo for the lead with two laps remaining. Macedo was forced to settle for second.

“To be able to run up front with them (McCarl and Brian Brown), to be on the podium, to race with this team, they work really, really hard,” said Macedo in the postrace press conference. “It’s been an incredible weekend to meet everybody and be a part of something so great. No matter what anybody says, to win the 360 Nationals, he said he got lucky with the rubber but I don’t think that’s true. He made good decisions late in the race and that’s what it takes to win these races.”

Macedo had a rocket of a race car until getting passed late. Just like Friday night he was very maneuverable. He made passes using multiple grooves on the race track, but it was the top lane that his No. 41 felt fastest. Unfortunately the lane that got him to the lead was also his downfall. He just didn’t know that bottom was there.

“Honestly at the beginning of the race I got a really bad start and fell back a little bit,” mentioned Macedo. “I was able to find the top and really start making momentum and speed up there. My car was so fast anywhere I went I could really make speed. I was able to keep the tires underneath me a lot of the time and get right rear grip. I was able to maneuver through a few cars and get behind Terry. I felt like I was pedaling the car pretty good and still able to maintain. I’m sure he was trying to save his tire. At that point I was running second and didn’t really have a lot to lose so I was driving pretty hard. I got around him and took the lead.”

He never left the top again which proved to be his downfall.

Brown Thought He Had his Second 360 Nationals Win

Brown didn’t get off to the best of starts in the A-Main, had some hiccups along with way, but he nearly pulled off the win as he thought he had found the rubber lane around the speedway before anyone else. Brown got comfortable through the middle, but the rubber lane migrated farther south on the race track before he was able to get there. McCarl found it and that was it for Brown’s chances at his second Knoxville 360 Nationals triumph.

“I thought we were going to win the race because I found the rubber first,” he said. “A lot of times when it does that it keeps working its way down, but if you go down there and it’s not there you are in no man’s land and you are not going to win. I looked up at the score board with five to go. I thought we were in good shape. Next thing you know there goes Terry by me. When that happens its over.”

Brown, always a fierce competitor, was disappointed to not win, but he put it all in perspective afterwards.  There is nothing to hang your head about finishing third at the Knoxville 360 Nationals.

“Like I told Carson when we walked across the race track, ‘if we are disappointed with second and third at the 360 Nationals when there is 100 cars it shows our expectation level.’ “

With the 360 Nationals now complete, Macedo and Brown begin their quest for the ultimately trophy, the Knoxville Nationals title, on Thursday night as they hope to improve on a very successful 360 Nationals. 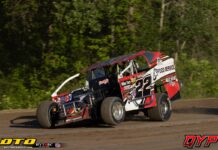 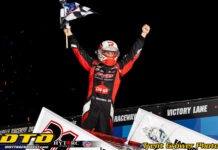 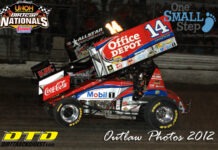