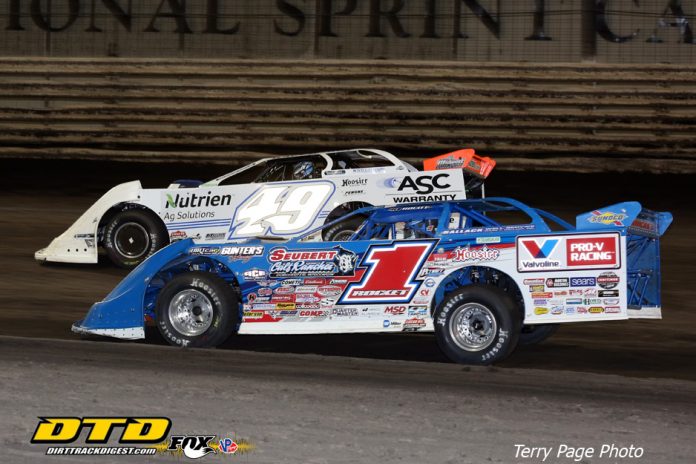 KNOXVILLE, IA – From nineteenth on the grid, Brandon Sheppard charged through the field to win Friday night’s portion of the Lucas Oil Late Model Knoxville Nationals presented by Casey’s General Store.
Sheppard used a late-race restart to take the top spot from Frank Heckenast Jr. and then sprinted away for his fifth Lucas Oil Late Model Dirt Series victory of 2018 and his first-ever win at Knoxville.
Heckenast led from the onset of the 25-lap main event as he looked for his third victory of the season. A restart with six laps remaining was the ticket for Sheppard, who had climbed through the field for the second night in a row. Sheppard dove to the inside of the race track entering turn one and powered by Heckenast down the back straightaway to grab the lead from his fellow Illini driver.
Sheppard pulled away in the closing laps to clinch the $7,000 victory. Heckenast finished second followed by Don O’Neal in third. Jonathan Davenport came home in fourth after running as high as second in the race. Tim McCreadie, who started tenth, rounded out the top five.
“I can’t believe it,” said the 25-year-old in Lucas Oil Victory Lane. “My crew has been working so hard this week. We have had a really fast car the whole time. We qualified good the last two nights, but we started so deep in the heat races. The earlier heat races it’s hard to pass, but the later heats it’s a lot better once the track slicks off. The feature tonight I hope it’s a lot like tomorrow night, because it’s a lot of fun. This is the Knoxville I love coming to.”
“My car was a little tight there for a while, but I made up good time on the bottom. I had a good restart one time and I hit one-and-two just right and I went around a couple of guys. I got to third and then I was hoping on the restart to start on the bottom. I learned from Josh [Richards] here in 2013 about getting the lead. When Frankie [Heckenast] entered turn one on that last restart he drifted up high and that just opened the door on the bottom for me.”
Heckenast, who was seeking his first career Lucas Oil win, held on for the second spot at the finish. “We had a really car tonight. We have been good all weekend. We had a fifth here last night. We are kind of parked over there by ourselves. We were really close tonight. I can’t thank everyone enough. I gave the race away on the restart. On the restarts they would get such a run on me into one. I thought I could hang out there on the top and get a run off of two, but Brandon obviously had a lot of traction. His car was good. I guess if we are going to have one taken away I would rather have it tonight than tomorrow night.”
O’Neal, who won the main event at Knoxville in 2011, finished in third to earn the fourth-starting spot for Saturday night’s finale. “All-in-all it was good run for us tonight. We had a good race there at the end with Davenport and we were able to get by him. We are getting better this week, we just need to get a little better for tomorrow night. We would have liked to have won tonight, but tomorrow night is what really counts.”
Sheppard’s, Mark Richards Racing Rocket Chassis House Car is powered by a Durham Racing Engine and sponsored by: Valvoline, Seubert Calf Ranches, Gunter’s Honey, Ace Metal Works, Sallack Well Service, Sunoco Race Fuels, Keyser and Integra.
Completing the top ten were Jimmy Mars, Tyler Bruening, Jimmy Owens, Chad Simpson and Kyle Bronson.
Lucas Oil Late Model Dirt Series
Race Summary
Thursday, September 14, 2018
15th Annual Lucas Oil Late Model Knoxville Nationals – presented by Casey’s General Stores
Knoxville Raceway – Knoxville, IA