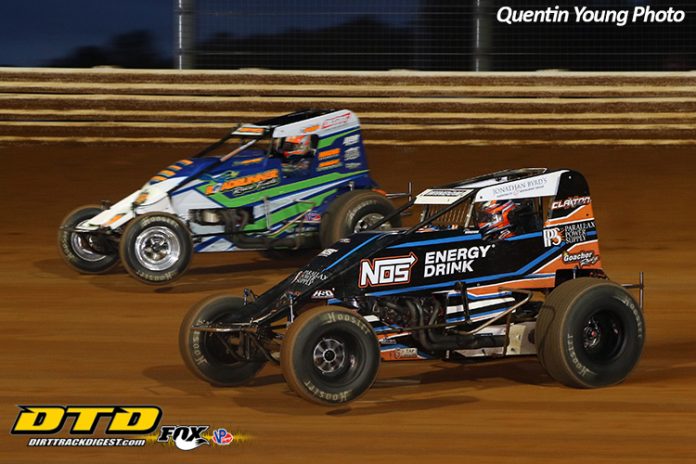 KNOXVILLE, IA – The BRANDT Professional Agriculture “Corn Belt Nationals” is one event drivers and teams of the USAC AMSOIL Sprint Car National Championship have had circled on the calendar since the day it was announced a year ago. Now, that time has arrived.

There’s a myriad of reasons for the excitement surrounding the event, namely the $20,000 going to the final night A-Main winner of the two-night show on Friday-Saturday, July 5-6. And one other, thing, it’s at the famed Knoxville Raceway, which is prime territory for an event of this stature and buzz.

Oh, lest we forget, there is the prestige of becoming the first “Corn Belt Nationals” winner which weighs on the minds of the nearly 50 drivers who are gunning to forever be remembered as the first victor.

Defending USAC AMSOIL National Sprint Car champion Tyler Courtney (Indianapolis, Ind.) was the dominant force in the 2018 stop by the series at Knoxville. Not only did he set fast time and win his heat going away, he tracked down Brady Bacon with 11 laps remaining in the non-stop feature event to sweep the night, establish a new 30-lap track record and score one of his series-leading 11 wins on the season.

It hasn’t been all roses for Courtney at Knoxville. He’s been a part of both ends of the spectrum at the half-mile dirt oval over the past two seasons. In 2017, he began the night strong enough with a heat race victory. However, while running near the front and tracking down the leaders just past halfway, Courtney caught the turn two cushion and flipped wildly in turn two, nearly getting as much elevation as the top of the catchfence.

Courtney has won two of the three races held on half-mile dirt ovals in a USAC Sprint Car thus far this season, capturing a pair of victories at the Terre Haute (Ind.) Action Track and Port Royal (Pa.) Speedway.

Ione, California’s Justin Grant was the top dog at Knoxville in 2017, leading all 30 laps to take the victory. When he returned with a new team in 2018, he didn’t miss much of a beat, winning his heat race and finishing 4th in the main event.

Kevin Thomas, Jr. was the fast qualifier that night at Knoxville in 2017 where he established a new, and still standing, USAC one-lap track record of 18.548 sec. The Cullman, Ala. driver’s Knoxville results in each of the last two seasons haven’t been up to his standards with a 7th in 2017 and 10th in 2018. However, he’s been “Moneyman” in 2017 and 2018, winning $25,000 at the “Oval Nationals” in both years, both of which came on half-mile tracks, at California’s Perris Auto Speedway.

Chase Stockon is having a banner year in 2018, which includes a victory with the series on a half-mile dirt track, in May at the 49th “Tony Hulman Classic” in Terre Haute. The Fort Branch, Ind. wheelman has been consistently a frontrunner in 10 starts this season, finishing in the top-ten in all of them. His productivity at Knoxville has displayed similar results, a 4th in 2017 and a 6th in 2018.

Perhaps no driver has as much of a successful USAC resume at Knoxville does than Broken Arrow, Oklahoma driver Brady Bacon. It’s a resume that dates to his Rookie USAC season of 2006 where he scored a pair of runner-up finishes on two-straight nights of Midget racing, leading a combined 11 laps in the process.

In his first USAC Sprint Car appearance at Knoxville, he was 2nd again. The following year, in 2011, the 2014 and 2016 series champ authored a complete sweep of the night, recording quick time in qualifying, winning his heat and scoring the feature victory. In 2017, he won his heat and ran 10th in the main. Most recently, in 2018, he led the first 19 laps of the 30-lap event, ultimately finishing 3rd.

Like Thomas, Chad Boespflug has been victorious in his career when big money was on the line, earning $60,000 over a two-night span at Badlands/Huset’s Speedway in 2016 by virtue of sweeping wins on back-to-back evenings. He was strong at Knoxville in 2017 with a 3rdplace run.

Chris Windom was 2nd behind Bacon at Knoxville in 2011 following an 8th place finish in 2010. The 2017 series champion won his heat race in each of the past two trips to Knoxville, topping out with feature finishes of 6th in 2017 and 9th in 2018. His best of 6th in 2017 came in a hard-charging performance in which the Canton, Ill. driver started 18th.

Dave Darland is the lone driver in the field to make appearances in all three of USAC’s national divisions at Knoxville, making his first start there in a Silver Crown car in 2000 where he finished 9th. A year later, he improved to a 4th place result. In 2006, he took a third in a Midget at Knoxville just behind Bacon. In a USAC Sprint Car at Knoxville, he’s been as high as 10th in 2010 and 8th in 2018, where he picked up hard charger honors after starting 17th.

Series point leader C.J. Leary is the only driver to have finished in the top-five at Knoxville in each of the last two years. After capturing a semi-feature victory in 2017, he turned up the wick to finish 5th that night and climbed up the pylon to a runner-up result behind Courtney in 2018.

A number of drivers are entered for their maiden USAC Sprint Car appearance at Knoxville, including Lincoln, Nebraska’s Don Droud, Jr., a top-five finisher in a USAC Midget at Knoxville in 2006 and a former one-lap track record holder at the half-mile in a wing sprint car. Also in the lineup are 2018 USAC National Sprint Car Rookie of the Year Timmy Buckwalter (Douglassville, Pa.), two-time USAC National Sprint Car feature winner Jason McDougal (Broken Arrow, Okla.) and Dickie Gaines (Mitchell, Ind.), whose father, Dick, won the Knoxville Nationals in 1974.

The event, co-sanctioned by Lucas Oil POWRi War Sprint League, will award appearance points only for drivers and teams toward the USAC AMSOIL Sprint Car National Championship, 50 points each night for those competing. Two complete programs concluding with a feature are on tap for both nights, paying $5,000-to-win on Friday and $20,000-to-win on Saturday.

On both Friday and Saturday, pits open at Noon (Central), driver sign in at 3pm, draw closes at 5:45pm, drivers meeting at 6pm and cars on track at 6:15pm.

Prior to racing action getting started at the BRANDT Professional Agriculture “Corn Belt Nationals,” the official kickoff begins with a Fourth of July celebration, including a concert and fireworks at Knoxville Raceway on Thursday, July 4.

Tickets for the inaugural BRANDT Professional Agriculture Corn Belt Nationals are available at www.knoxvilleraceway.com/tickets or by calling the Knoxville Raceway ticket office at 641-842-5431. Tickets start at $20 for adults, $15 for teens and $10 for children 12 and under on Friday. Saturday’s tickets increase by $5.

STARTING TIMES:
On both Friday and Saturday, pits open at Noon (Central), driver sign in at 3pm, draw closes at 5:45pm, drivers meeting at 6pm and cars on track at 6:15pm.